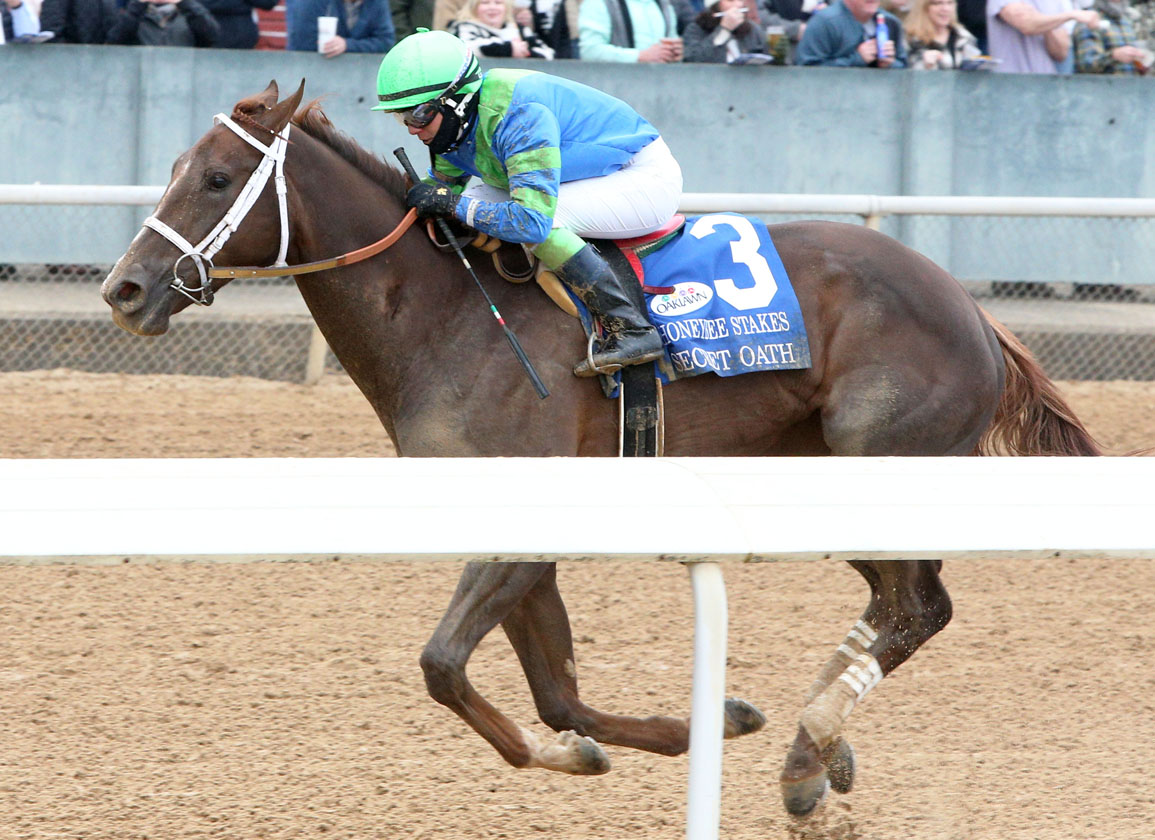 What to do with the Bob Baffert-trained horses? Up until now, we have been including them in the TDN Kentucky Oaks rankings, believing that they'd find a way into the race. Either their owners would move them to another trainer or Baffert would find a way through the courts that would allow them to enter. But when the story broke last week that Baffert had not nominated a single horse to the GI Kentucky Oaks we decided to drop them from the rankings and won't include them again until there is more concrete news on their status for the Oaks.

The big story last week was, of course, the win by Secret Oath in the GIII Honeybee S. at Oaklawn. It will be a busy weekend for the 3-year-old fillies as Gulfstream offers the GII Davona Dale S. on Saturday and Santa Anita's Sunday card includes the GIII Santa Ysabel S. The weekend's racing action also features the Busher Invitational S. at Aqueduct.

Here's a look at the top 3-year-old fillies who are aiming for the May 6 Oaks:

You can question who she beat, but not the way she did it. The Wayne Lukas/Secret Oath story rolls on. Winning her second consecutive stakes and her first graded stakes, she beat up on her competition in the Honeybee, moving her 86-year-old trainer one step closer to a possible win in the Kentucky Oaks. After showing little in her first three starts, she's turned into a monster at Oaklawn, taking her three starts there by a combined 23 lengths.

In the Honeybee, which she won by 7 1/2 lengths, she covered the 1 1/16 miles in 1:44.74. Later on in the card, the GII Rebel S. for 3-year-old males went in 1:45.69. Lukas won the GI Arkansas Derby in 1984 with the filly Althea but, so far, is saying that it's likely Secret Oath will stay with the fillies. That decision was made easier when the Lukas-trained Ethereal Road (Quality Road) emerged as a Derby contender with a second-place finish in the Rebel.

Thirty-two years after he last won the Oaks, with Seaside Attraction in 1990, Lukas could return to the winner's circle in what would be among the more remarkable stories in the sport in some time. Or might he be tempted to point her for the Kentucky Derby, a race he won with a filly in Winning Colors in 1988? It should be interesting.

Secret Oath is also carrying the banner for her sire, Arrogate, who died in 2020 and will have a limited amount of offspring make it to the races. Secret Oath is his first graded stakes winner in North America.

Speaking of Lukas, his protégé Todd Pletcher could stand in the way of his winning the Kentucky Oaks. Pletcher has a number of potential Oaks candidates, but the best of the bunch is Nest.

Like Secret Oath, Nest didn't beat much in her last start, the Suncoast S. at Tampa Bay Downs, but she did it with authority, romping by six lengths. Coming off a layoff after winning the Dec. 4 GII Demoiselle S. at Aqueduct, Nest got exactly the type of prep that should move her forward on the road to the GI Ashland S. and the Kentucky Oaks. Pletcher will be after his fifth Oaks victory, which would tie him with Woody Stephens for most wins in the race by a trainer. Nest is a full sister to 2021 GI Santa Anita H. winner Idol (Curlin), who is working toward his 2022 debut at San Luis Rey Downs.

She has won only a maiden race and a non-graded stakes, so Kathleen O. has plenty to prove. And she'll get the chance Saturday in the GII Davona Dale S. She's 9-2 on the morning line, which is probably a reflection of her speed figures more so than how impressive she's been visually. With a best Beyer number of 78, she's not that fast. But her last race, a win in the Cash Run S., is better than it looks on paper. She hesitated at the start and then had some traffic problems, but still won by 8 1/2 lengths. Hall of Fame trainer Shug McGaughey always takes his time with young horses, so this one should only get better. The Davona Dale will certainly be a major test for this filly.

She's getting there. Last year's 2-year-old filly champ had her fourth workout this year when breezing five furlongs in 1:01.80 on Monday at the Fair Grounds for trainer Steve Asmussen. “Looks good,” Asmussen wrote in a text. The Hall of Fame trainer has yet to announce where Echo Zulu will run next, but the GII Fair Grounds Oaks on March 26 seems like a logical spot. If that's the case, she will probably have only one prep for the Oaks. That may not be ideal, but Asmussen obviously knows what he's doing and his filly, after going undefeated at two, probably doesn't need to do a lot to get ready. Because she's been idle, she's flown under the radar this year, but let's not forget how dominant she was last season.

This is the wild card in the race toward the Kentucky Oaks. The daughter of Runhappy is as fast as they get. She broke her maiden by 11 3/4 lengths and then won the Astoria S. by 11 1/2 lengths. Coming off a layoff of eight-plus months, she made her 3-year-old debut against a tough group of opponents in the Feb. 19 Dixie Belle at Oaklawn, which she won by three lengths. The problem is she's never run beyond six furlongs. She's trained by Wesley Ward, who does his best work with sprinters, so it came as somewhat of a surprise when he said the Oaks is a possibility. Either the Ashland or the GIII Beaumont S. will be next. She's good enough to win a Grade I, but can she win a Grade I at nine furlongs?

This Saturday's Davona Dale should determine whether or not Girl With a Dream belongs in the Oaks. Trained by Brad Cox, she has won three straight, including the GIII Forward Gal S. in her most recent start. But like Happy Soul, she's been sprinting and has never gone beyond seven furlongs. It looks like Cox is using the one-mile Davona Dale as a test to see if she can handle longer races. She is the 3-1 morning line favorite, is the clear speed in the race and figures to open up to an easy lead with Luis Saez aboard.

Another Cox trainee, it's hard to know what to make of her. Going into the GII Rachel Alexandra S. Presented by Fasig-Tipton, she looked like she had the makings of a good grass horse. The winner of the Juvenile Fillies S. at Kentucky Downs and the third-place finisher in the GII Jessamine S., she made her dirt debut in the Rachel Alexandra and was dismissed at 17-1–huge odds for a Cox horse. With Florent Geroux aboard, she came through and won by a half-length and is obviously a contender for the Kentucky Oaks. But the Rachel Alexandra was a strange race. The 2-1 favorite, Hidden Connection (Connect), was a non-threatening fourth; and third choice La Crete (Medaglia d'Oro) was pulled up with a career-ending injury. We'll know more about this filly when she makes her next start, which Cox said will either be in the GI Ashland or the GII Fair Grounds Oaks.

Unraced since a Jan. 23 win in the Busanda S., Magic Circle will look to return to the winner's circle Saturday at Aqueduct in the Busher Invitational. Normally stakes races in the winter at Aqueduct don't come up that tough, but the Busher is not an easy spot. The field will include the Shug McGaughey-trained Radio Days (Gun Runner), who was second in the Forward Gal; and Ruthless S. winner Shotgun Hottie (Gun Runner). The winner of this race will be legit. For Magic Circle, after winning the Busher at nine furlongs, she will be turning back to a one-turn mile. Magic Circle is a steady, blue-collar type, and a good fit for the winter at the Big A. It remains to be seen if she can step up and win against tougher. 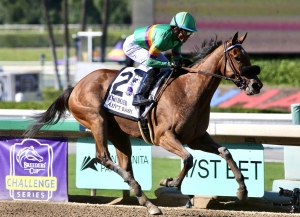 Remember this one? After winning the GII Chandelier S. last fall at Santa Anita by 4 3/4 lengths, she was ready to take on all challengers in the GI Breeders' Cup Juvenile until it was discovered that she had a small chip in her left front ankle. She's been working her way back with a series of breezes at Santa Anita and is set to make her 3-year-old debut Sunday in the Santa Ysabel. Coming off a six-furlong gate work in 1:14,60, it looks like trainer Phil D'Amato has her ready to go. A $400,000 yearling buy by Into Mischief, she could be the real deal.

The news broke Saturday that 'TDN Rising Star' Shahama (Munnings) was being transferred to the Todd Pletcher barn with an eye on making the Kentucky Oaks. A half-sister to two-time Eclipse Award winner Lookin At Lucky (Smart Strike) and to MGSW Kensei (Mr. Greeley), she is 4-for-4 with her most recent win coming in the GIII UAE Oaks at Meydan on Feb. 18. She's never run anywhere but Dubai, so it's hard to tell how her form will transfer to U.S. racing, but she has been impressive in her wins. An interesting new face on the trail to the Kentucky Oaks.