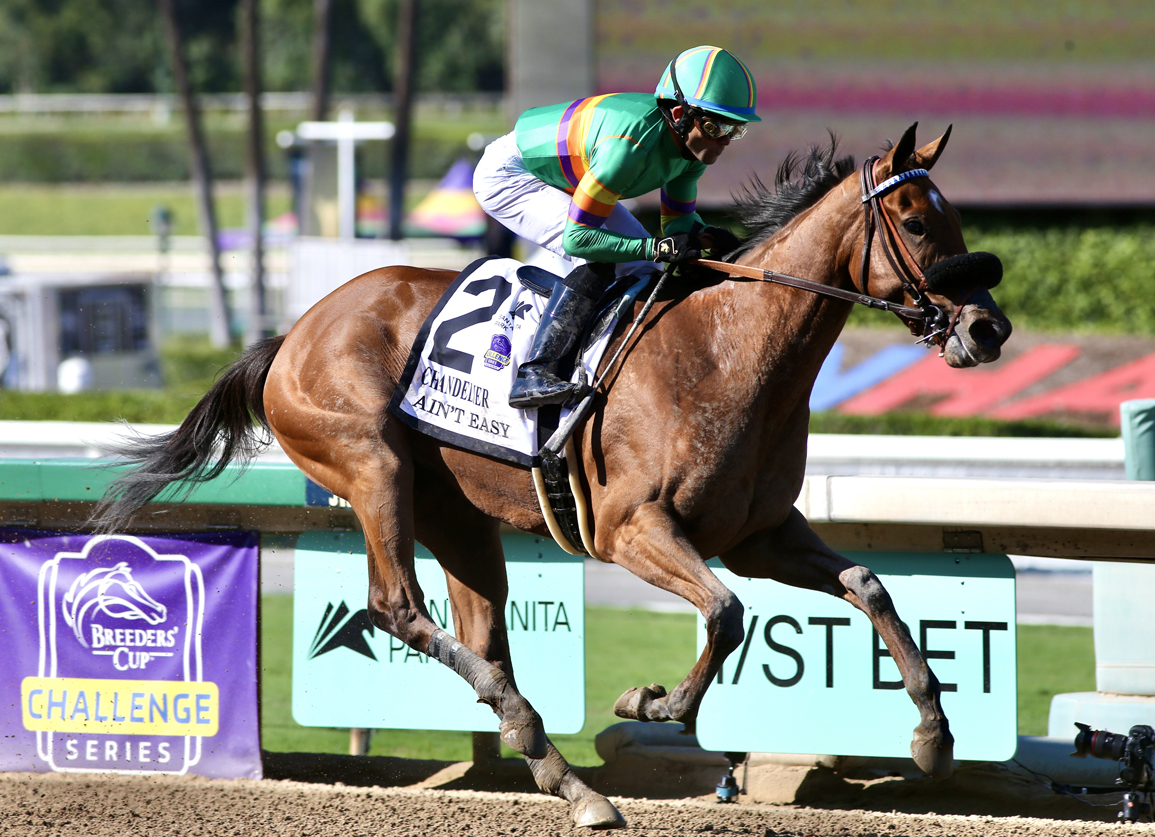 'TDN Rising Star' Ain't Easy (f, 2, Into Mischief–Ameristralia {Aus}, by Fastnet Rock {Aus}) put on a show to remain unbeaten while punching her ticket to the GI Breeders' Cup Juvenile Fillies in Friday's 'Win and You're In' GII Chandelier S. at Santa Anita.

Ain't Easy, a sharp 5 1/4-length debut winner going 5 1/2 furlongs at Del Mar Aug. 21, raced in a joint- second under a snug hold on the inside rounding the clubhouse turn in this two-turn debut. Joel Rosario sent her through an inviting opening along the inside to challenge for command at the half-mile marker. The 7-2 chance began to let it out a notch a quarter of a mile from home and wasn't for catching from there, scoring by 4 3/4 good-looking lengths.

“She acted very professional, sitting behind horses,” said winning trainer Phil D'Amato, who also saddled the third-place finisher. “When Joel [Rosario] wanted to, she came up the inside, which I like to see with a young horse. She just looked like she was having fun in the stretch. I think it set up perfect. A good two-turn experience, confidence booster, an easy win, where it didn't look like she was taxed too much, so I like everything I saw right now.”

Ain't Easy becomes the 100th stakes winner/45th graded winner for her all-conquering sire Into Mischief. The winner's dam–Group 3-placed sprinting on the lawn in Australia and a full-sister to Japanese MGSW Fiano Romano (Aus) (Fastnet Rock {Aus})–is also responsible for a colt by Bolt d'Oro of 2020 and a filly by Mendelssohn of this year. She was bred back to Vino Rosso. Ain't Easy's second dam Heart Ashley (Lion Heart) was a two-time Grade III winner and brought $500,000 from James Bester, agent, at the 2010 KEENOV sale. This is also the female family of GI Cold Cup at Santa Anita S. winner and young sire Cupid (Tapit).

This story was posted in Top News and tagged "Win and You're In", Ain't Easy, Breeders' Cup Juvenile Fillies, Chandelier, Into Mischief, Phil D'Amato, Santa Anita.