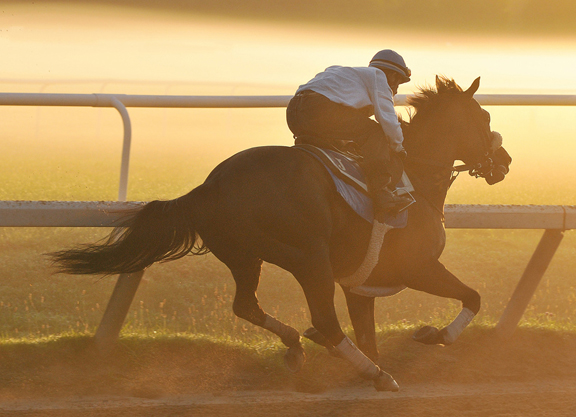 Like many issues in racing, the inaccuracy of published workout times is something we who are firmly planted in the industry have all just accepted as the way it is. Quote a breeze time to any trainer, owner or serious horseplayer and they'll tell you why it's pointless. “Official” times of works, and rankings, bullets, etc. are almost never correct, and somehow we've all just gone along with it.

I'm sure I'm not the only one who has analyzed workout video of a horse like it was the Zapruder film to figure out if our trainer's stopwatch was off by several seconds or if the clocker's was (it was the clocker's). And I'm sure I'm not the only syndicate manager who finds himself starting almost every post-breeze update with some version of “Well, we clocked her in this, but it was recorded as that.”

I touched on this issue in my contribution to our Making Betting More Friendly series earlier this week, and for all the feedback I received (more than for anything I've ever written), not one person called into question the assertion that workout times are often wrong. It is a fact, plain and simple, and one of the dirty little secrets in racing we must address if we're serious about cleaning up the sport and turning around the declining handle trend.

Let's for a second assume that inaccuracies are innocent products of human error due to the admittedly difficult logistics of following the flurry of horses out for a breeze after a renovation break at a major track: would any other serious sport, or at least one that wants to be taken seriously, accept a scenario in which thousands of official, published data points are blatantly inaccurate and unregulated? At least billions of dollars aren't wagered on racing or anything… and that racing's continued existence doesn't depend on those dollars.

Admittedly, there are far bigger and more pressing issues we face as a sport, but this one is a much easier fix than most others and is a microcosm of what's been wrong with the game for too long.

Some of the responses I received referenced my suggestion that all workouts should be filmed, XBTV style, saying it'd be great if it were possible, but it isn't. Sure, filming every single work might be logistically difficult and certainly not cheap, but there are measures that can be taken and technologies that can be embraced to improve on this blind spot.

Official clocking is simply not a job for unsupervised humans (who are able and allowed to bet, and also have open lines of communication with trainers, who likely have a hand in these inaccuracies some of the time as well), and probably never was–now we have technology, and the absolute need given the current gambling landscape, to fix it.

Oaklawn offered a live video feed of its stretch every morning during the meet–the quality of the videos and angles weren't necessarily the best, but it's a step in the right direction and something that can still be improved upon. Every track should have something similar, at the very least.

Clockers need to know others are watching, and horseplayers need a chance to access information that hasn't been processed, or manipulated, by their direct competition in the pari-mutuel pools. When a firster with a slow work tab opens up at 2-1 and wins off the screen, perhaps officials could even go back and review the horse's breeze footage and do some hand timing.

That's not to say that all filmed works are free from errors, or can't still be recorded in a misleading way, or that increased video alone is a perfect system.

Take this Jan. 14 breeze at Santa Anita, which is far from the most egregious example you'll find and perhaps a bit nuanced.

This pair of newly turned 3-year-old filly stablemates broke off head-and-head from the five eighths pole, and the outside horse finished about a length ahead at the wire before being asked to continue on past the wire, yet the horse in front at the wire was credited with a five-furlong breeze in 1:00 1/5 compared to 1:00 flat for her stablemate by the track's official clockers. Even if you say the two fillies were working between different poles, the outside horse covered the five furlongs of the other filly's work faster. At the very least, she should have been credited with a six-furlong work.

Both fillies debuted in the same race six days later, and the “slower” horse from a week earlier was pounded down to 2-5 while her stablemate was let go at almost 12-1.

Of course, the horse who clearly worked better, and faster–despite what the “official” record indicated–finished ahead on race day (second and third, respectively).

I doubt the poor souls who bet the “faster” stablemate at longshot odds due a comparison of the times would accept the pole explanation or anything other. Those who paid for the private clocker reports that are so popular out West likely got a far more accurate impression of what happened on the morning of Jan. 14.

So, taping all breezes probably isn't perfect, or easy, or cost effective, but it would still be useful. I'm hopeful that additional reform could be on the horizon due to another technology, as well.

Equibase/TrackMaster announced the acquisition of American Teletimer Corporation (ATC)'s timing assets at the beginning of the year, citing four areas for which GPS technology could be used: timing (of races), enhanced graphics, chart calling (another aspect of data collection that still relies heavily on the human eye) and tracking/timing workouts.

While workouts are the “fourth pillar” of the ongoing incorporation of this technology, TrackMaster President and CEO David Siegel told me via email this week that he expects the GPS technology to be introduced for workouts at some level in 2021. A significant number of tracks have already signed on to the program: Golden Gate Fields, Penn National, Laurel, Pimlico, Mahoning Valley, Sam Houston, Oaklawn, Woodbine, Kentucky Downs, Colonial Downs, Canterbury, Del Mar and The Meadowlands (harness).

Fingers crossed that this list gets longer and is introduced at every venue–it would fix the problem almost entirely (But then we'd still have the issue of workouts at training centers that don't even have clockers).

But, until then, if we can't get it right, why even publish workout times? As they currently stand, they're a slap in the face to customers and just further call into question our sport's integrity–something we really don't need right now. We should also do some introspection and ask ourselves how we let such a poorly kept secret go on unaddressed for decades. We must do better in this area and so many others.