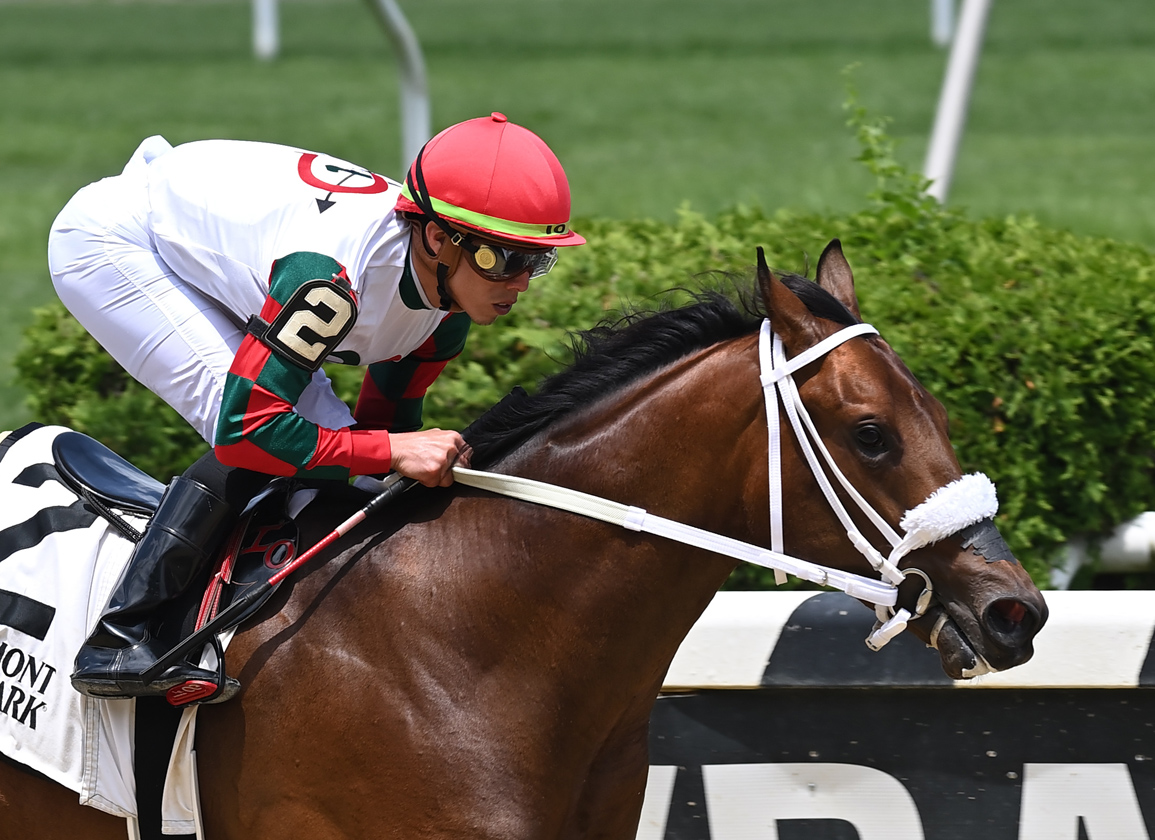 With runners this week from New York to Kentucky and in between hailing from exceptional families, Insights was treated to a 'Rising Star' performance and other top-notch victories ready to fire the imagination. It's a good bet a number of these winners–and even those whose debuts weren't quite as fruitful on first attempt–will be heard from again.

Third time was a charm for the gelded CAPONE (g, 3, Classic Empire–Hit the Limit, by Uncle Mo), who splashed home on top at the expense of For Good (Curlin), champion Good Magic's full-brother. Favored, green, and fourth in the mud, the Stonestreet-bred For Good went for $800,000 as a Keeneland September yearling and shares a third dam with last year's champion female sprinter Ce Ce (Elusive Quality). Don't count out For Good; Good Magic didn't break his maiden until his third start, which just happened to be the GI Breeders' Cup Juvenile, and sired his first winner as a first-crop stallion on Churchill's Thursday card. For his part, Capone was a $400,000 Fasig-Tipton Midlantic 2-year-old purchase by Solis/Litt after working in :10.2. His granddam is a half to 2005 GI Kentucky Oaks winner and $3.3-million Fasig-Tipton November star Summerly (Summer Squall). Click for the Equibase.com chart or VIDEO, sponsored by TVG.

Ticking all the boxes is ANDIAMO A FIRENZE (c, 2, Speightstown–My Every Wish, by Langfuhr), who is everything you want in a 2-year-old: out of a Grade I producer, by a consistently brilliant sire, and christened a 'TDN Rising Star' on debut. A homebred for Ron Lombardi's Mr Amore Stables, Andiamo a Firenze led throughout, eased up well before the wire, and was still much the best. The sky's the limit for this Kelly Breen trainee, who is the 23rd runner by Speightstown to be named a 'Rising Star'. His granddam is a full-sister to Broodmare of the Year Oatsee (Unbridled), a mare responsible for Classic winner Shackleford (Forestry), GI Alabama S. winner Lady Joanne (Orientate), and two other graded winners. Click for the Equibase.com chart or VIDEO, sponsored by TVG.

There were some returning stars in this optional allowance Friday, but it was CONAGHER (c, 3, Jimmy Creed–You Should Be Here, by Niagara Causeway), a last-out, 6 3/4-length Keeneland winner with a 97 Beyer, who led from the break and stole the show by daylight. A Fasig-Tipton October yearling buy at $9,000, the Michael A. Tomlinson runner is out of a mare who sold three times–as a weanling, a yearling, and a 2-year-old–for an aggregate $25,300. Winchell homebred Gunite (Gun Runner), victor in last year's GI Hopeful S. and making his first start as a sophomore after eight months away, was the runner-up, while January's GIII Lecomte S. winner Call Me Midnight (Midnight Lute) continued to flounder in his third start since and finished fourth of five. Click for the Equibase.com chart or VIDEO, sponsored by TVG.

The much-anticipated debut of TYPHOON LAGOON (c, 3, Kitten's Joy–My Typhoon {Ire}, by Giant's Causeway) will have to wait, as Gulfstream was forced to cancel the weekend's racing due to Tropical Storm Alex. A runner on this side of the pond whose GISW dam is a half-sister to Galileo (Ire) and Sea The Stars (Ire)? Yes, please!

Debuting Gunning (Gun Runner)–a Grandview Equine homebred out of 2014 'TDN Rising Star' Puca (Big Brown)–was an excellent closing runner-up to COLORFUL MISCHIEF (f, 3, Into Mischief–Color Me Flying, by Distorted Humor). Gunning had sold in utero with her dam for $475,000 at the 2018 Fasig-Tipton November Sale. Colorful Mischief, who debuted on Oaks Day with a bothered third, tracked and rallied here for a brave and hard-fought trip to the winner's circle. Her granddam is an A.P. Indy half-sister to champion Storm Flag Flying (Storm Cat), making Colorful Mischief a great-great-granddaughter of the incomparable champion and Broodmare of the Year Personal Ensign (Private Account). St. Elias Stable picked her up as a $300,000 yearling at Fasig-Tipton Kentucky. Click for the Equibase.com chart or VIDEO, sponsored by TVG.

Don Alberto homebred PASS AND STOW (c, 3, Medaglia d'Oro–Paola Queen {GISW, $431,490}, by Flatter) registered as nice a debut as you'd like to see, setting challenged fractions before pulling clear late for a decisive victory. He didn't sell on a trip through the ring, being bought back for $100,000 at Keeneland September, but his dam has set off sales fireworks more than once. Winner of the 2016 GI Test S., Paola Queen sold at Keeneland November that same year for $1.7 million, then brought the same amount at the same sale a year later, where she was acquired by Don Alberto. Pass and Stow is her first foal; her second is a 2-year-old Into Mischief colt who topped last year's Fasig-Tipton Saratoga Sale when selling to Coolmore's M.V. Magnier for $2.6 million. Click for the Equibase.com chart or VIDEO, sponsored by TVG.

Comebacking UNION LAKE (f, 3, Speightster–Donnatale, by Tale of the Cat) weakened late when unveiled last October and has been on the bench ever since, but shook off the rust with a tenacious win after battling with highlighted Amaretti (Bernardini). The Steven Schoenfeld-owned Union Lake was picked up by Tonja Terranova for $55,000 as a Fasig-Tipton Kentucky October yearling. Amaretti, who briefly had the lead in the lane after showcasing her inexperience early, lost the stretch brawl to finish a good second. A homebred for Godolphin, Amaretti is a half to 2021 GII Lexus Raven Run S. winner Caramel Swirl (Union Rags), while her unraced dam is a half to MGISW Frosted (Tapit). Champion Midshipman (Unbridled's Song) is a half to her GSW granddam. Also debuting in this race was Quotabelle (Distorted Humor), a granddaughter of Hall of Famer Ashado (Saint Ballado), who fetched $325,000 as a Fasig-Tipton Kentucky yearling. After hustling early, she tired to be seventh. Click for the Equibase.com chart or VIDEO, sponsored by TVG.

Our last highlighted race of the week was the final at Churchill Sunday, where ELITE POWER (c, 4, Curlin–Broadway's Alibi {MGSW & GISP, $521,500}, by Vindication)–who was third in the 'TDN Rising Star' performance of Strobe (Into Mischief) on Derby Day–turned in a tour de force of his own. A subject of Insights on debut last fall, Elite Power may have taken a while to get going, but he'd improved with every start and finally put it all together with a geared-down domination. His MGSW dam was second in the 2012 GI Kentucky Oaks and hails from the same family as 2011 GI Florida Derby winner Dialed In (Mineshaft). Elite Power was a $900,000 Keeneland September purchase who races for Juddmonte. Featured in Insights was Godolphin homebred Concerted (Hard Spun), who broke slowest of all, came on well, looked to brush with a rival in the stretch, and was a fine third for a first start. His unraced dam–a full to GSW & MGISP Penwith (Bernardini)–has already produced MGSW Shared Sense (Street Sense). Her dam was the late MGISW Composure (Touch Gold), a $3.6-million Godolphin purchase at Keeneland November in 2003. Click for the Equibase.com chart lain or VIDEO, sponsored by TVG.