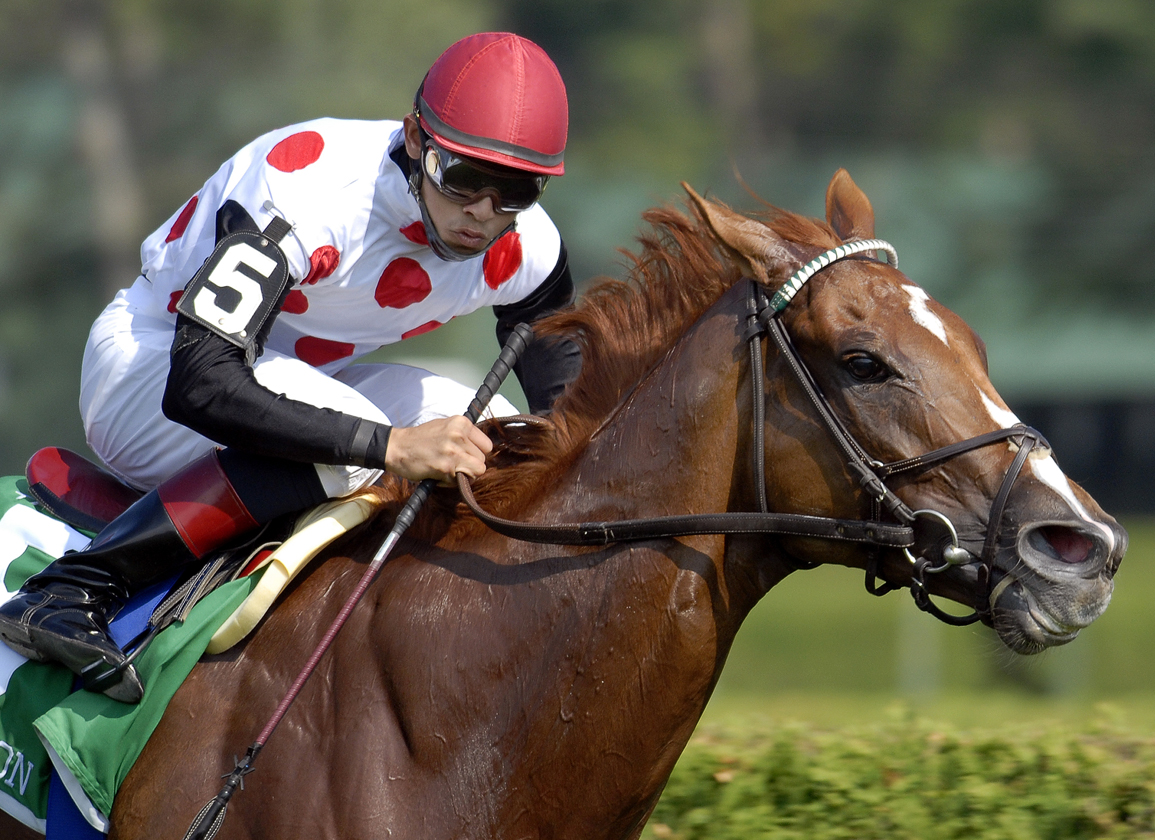 Sponsored by Alex Nichols Agency
5th-GP, $50,000, Msw, 3yo/up, 1mT, post time: 3:13 p.m. ET
A day after her half-brothers Galileo (Ire) and Sea The Stars (Ire) accounted for the two Group 1 winners on Cazoo Oaks day at Epsom, Live Oak's Grade I winner My Typhoon (Ire) (Giant's Causeway) is represented by the debuting TYPHOON'S LEGACY (Kitten's Joy). Charlotte Weber's operation paid a sales-topping (more than three times the price of the next most expensive offering) 1.8 million gns ($2,942,730) for My Typhoon when offered by the Irish National Stud at the 2002 Tattersalls December Foal Sale and she earned back $1.3 million at the races, including a victory in the 2007 GI Diana S. at Saratoga. In addition to Galileo, whose daughter Tuesday (Ire) won Friday's main event at Epsom, and Sea The Stars, whose son Hukum (Ire) was imperious in taking out the G1 Coronation Cup, My Typhoon is kin to G1SW Black Sam Bellamy (Ire) (Sadler's Wells) and SW & G1SP Born to Sea (Ire) (Invincible Spirit {Ire}), among others. TJCIS PPs

Well-Bred Firsters Step Out at the Jersey Shore…
4th-MTH, $57K, Msw, 3yo/up, 6f, post time: 1:39 p.m. ET
PASS AND STOW (Medaglia d'Oro), a $100K KEESEP RNA, is a son of Paola Queen (Flatter), 55-1 winner of the 2016 GI Test S. and sold at that year's Keeneland November sale for $1.7 million. She was acquired for that same amount by Don Alberto Corp. at KEENOV in 2017, and the year-younger half-sibling to Pass and Stow, a colt by Into Mischief, topped last year's Fasig-Tipton Saratoga sale on a bid of $2.6 million. The latter was on the Saratoga worktab as recently as June 2, breezing three-eighths of a mile in :36.91. Balantyne (Tapit), purchased for $310K at KEESEP in 2020, is out of GSW/GISP Graeme Six (Graeme Hall), making him a half-brother to GSWs Cali Star (Street Cry {Ire}) and SW Seymourdini (Bernardini) and a full-brother to GIII Monmouth Oaks heroine Delightful Joy. TJCIS PPs