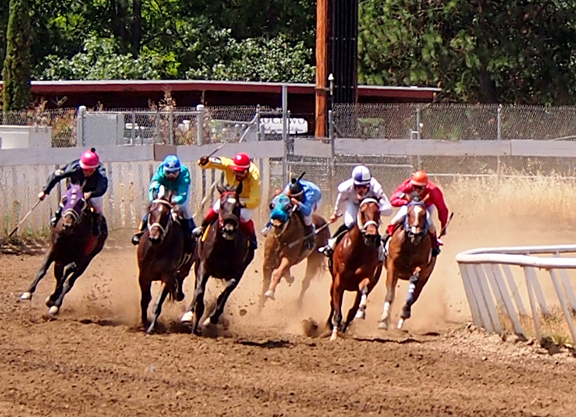 That's an improvement from the update McGrail provided at the March ORC meeting, when the status of Eastern Oregon Livestock Show meet in Union and Harney County Fair in Burns were both considered to be in limbo because of the ongoing COVID-19 pandemic.

Those two fairs will join Crooked River Roundup in Prineville and Tillamook County Fair in Tillamook, both of which had already expressed commitment to racing in 2021.

“Our four fair meets are all tentatively scheduled to run this year, which is rather surprising,” McGrail said during the Apr. 15 teleconference meeting. “But we're very pleased about that. The situation is somewhat fluid [because of ever-changing pandemic restrictions]. But we do feel that all four meets are going to run.

“Things will look a little bit different, and logistically there are some challenges,” McGrail continued. “But we've provided additional funds to the fairs to work through some of those challenges, including additional sanitation measures and cordoning off people, and [to offset] the fact that they might have some revenue losses or some reduction in revenue due to limitations on attendance.

“But that they're all going to run is a good thing, and they'll all be going to run on their traditional race dates, excepting Harney County, which is going to try, as an experiment, to move to a two-day meet July 24 and 25. We're hoping that those dates, which come on the heels of the Crooked River Roundup, will encourage more horsemen to travel out to [Harney]…”

McGrail explained that Grants Pass Downs, which transitioned from a fairs track to being the lone commercial licensee in Oregon in 2020 after the closure of Portland Meadows, has agreed to make small schedule adjustments to its 35-day meet so it better dovetails with the fairs circuit.

Rod Lowe, the Grants Pass Downs racing director and chief operating officer, said during the meeting that “200 plus” horses are already training at the southern Oregon track in anticipation for the May 10 season opener. He added that all 450 stalls on the grounds are expected to be allocated, but “if anybody else comes in, then we'll try to accommodate them also, somehow.”

Lowe explained that Grants Pass is in the midst of an approval process to have an adjacent three-acre piece of property converted to stabling, which will add 200 more stalls.

Lowe also noted there is currently a shortage of licensed riders to exercise horses during morning training at Grants Pass.

“We're a little short on exercise riders [and] jockeys at this point,” Lowe said. “A lot of them are still at other racetracks, and they're starting to dribble in. But so far we've been able to keep up. They've had to really run from barn from barn to get on enough horses to get everybody out; they're getting by.”

Shortly after Lowe's update, the open-public commission meeting was “Zoom bombed” by an obscenity-spewing disruptor whose intrusive and lewd comments did not appear to be connected in any way to the racing community. The tele-meeting had to be stopped, and to deny further access to the troll, a private link to continue was emailed to commission participants; this prevented TDN from covering the remainder of the meeting.