Midlantic Sale Strong to the End 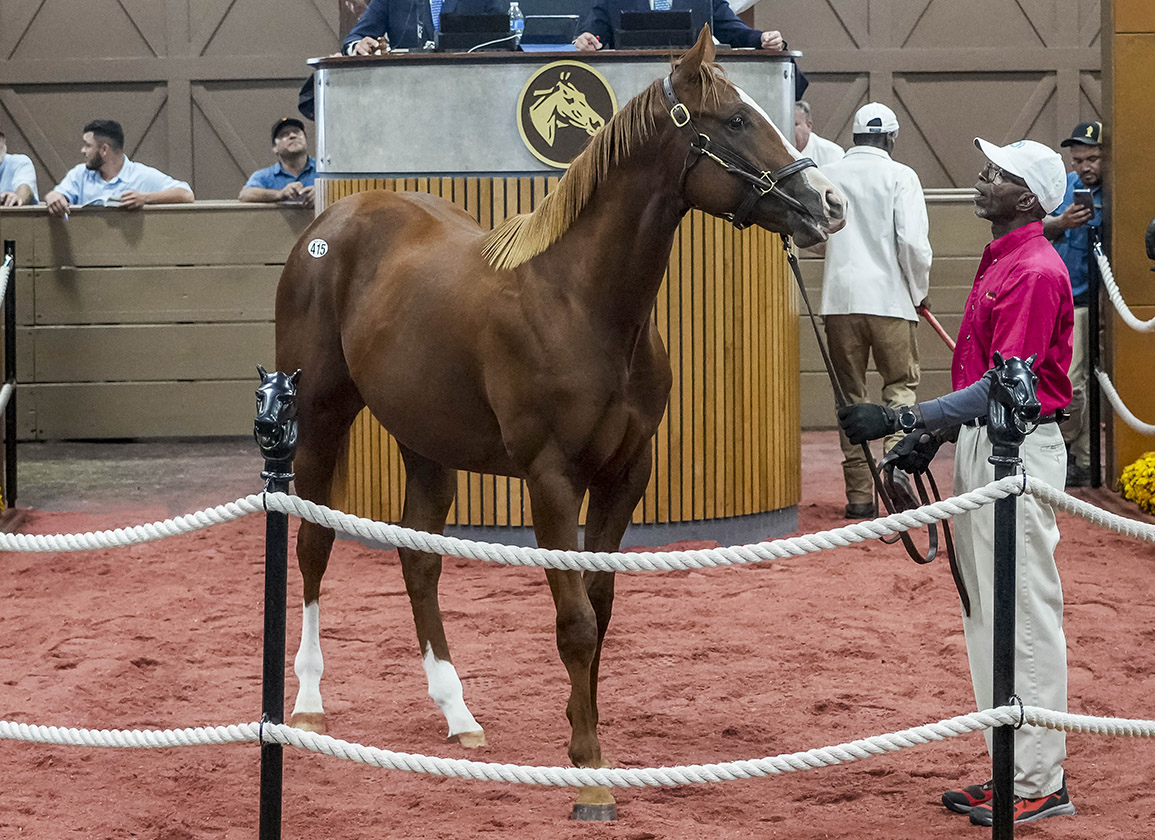 TIMONIUM, MD – The Fasig-Tipton Midlantic Fall Yearlings Sale streamrolled to its conclusion Tuesday, ending its two-day run in Timonium with figures up across the board and six-figure transactions right through the very last horses through the ring.

“Based on what everybody else was experiencing at previous sales, we were confident it would continue on, but to have the gross up 24%, the average up 23% and the median up 43% was great,” said Fasig-Tipton Midlantic Sales Director Paget Bennett.

“I always hope that we can stay even with last year,” Bennett said. “Even with COVID last year, we were still right in line with the previous year's results. And we exceeded that this year. So that was huge.”

Of the auction's stellar buy-back rate, Bennett added, “People want horses at all levels, which is good for us and good for the breeders.”

First-crop sire Mendelssohn, who was represented by the session topper Monday, secured the sale-topper Tuesday when David Scanlon paid $235,000 for a colt from the Northview Stallion Station consignment. The yearling was one of 16 to bring six figures at the auction, up from 11 in 2020.

Local breeders and consignors supported the sale and were rewarded, according to Bennett.

“We are only as good as what people send to us,” Bennett said. “We've been supported by out-of-town consignors, but we had a lot of the Midlantic breeders and consignors who did well here as well. The top seven prices were sold by local connections. They all brought good horses and they were well-received and they were rewarded.”

The massive increase in median and the sparkling buy-back rate were indicative of a stronger middle market.

Scanlon Gets His Mendelssohn

Dave Scanlon was underbidder on Monday's session-topping son of Mendelssohn, but the Ocala-based pinhooker would not be denied Tuesday when going to a sale-topping $235,000 for another son of Coolmore's first-season sire (hip 415).

“We loved the sire,” Scanlon said after signing the ticket on the youngster. “We think he's going to be a big hit this year. Obviously, he's already been a big sales horse.”

Consigned by Northview Stallion Station, the chestnut colt is out of the unraced Grace is Gone (Malibu Moon), a daughter of Grade I-placed Grace Anatomy (Aldebaran).

“He was just very athletic with a big beautiful walk on him,” Scanlon said of the yearling. “I thought he'd be a nice horse for the 2-year-old sales. We will train him and get him started and see how he fits. He is such a nice, big mature horse, it could be Miami [Fasig-Tipton Gulfstream sale] or it could be back here [Fasig-Tipton Midlantic May sale].”

“They just look like athletes,” Scanlon said of the yearlings by Mendelssohn that he has seen. “They have really good bone, good hip and great angles on them.”

Scanlon was making his second purchase of the Midlantic sale. He went to $30,000 to acquire a filly by Uncle Lino (hip 17) Monday.

“The market has been tough,” Scanlon said. “For the right horse, it's been very good. There are a lot of good judges here and if they lead the right one up here, you've got to pay for them. Hopefully, it carries over to the 2-year-old market.”

Monday's session topper was purchased by Conor Foley of Oracle Bloodstock.Scanlon agreed he found himself bidding against more end-users while trying to maintain the discipline necessary for a pinhook prospect.

“Especially with a horse like that, you get your hopes up and you follow them up there and then you go to your limit,” Scanlon said. “It happened to me yesterday when I was underbidder on the other Mendelssohn and an end-user kind of jumps over top of you. You have to set your bar, though. We lost the one yesterday, but we were looking to get this one and stepped our game up here.”

“I love Mendelssohn and this was a very well-balanced horse and a very good walker and he seemed like a good bet,” Wade said of last fall's purchase. “We actually went down there and bought two. We bought an Empire Maker and a Mendelssohn and brought them both home and the owner looked at them and said, 'Let's pinhook the Mendelssohn and race the Empire Maker.'”

Chuck Zacney of Cash is King, who purchased Cathryn Sophia (Street Boss) for $30,000 out of the Fasig Midlantic sales ring in 2014, was back in action in Timonium Tuesday, going to $200,000 to acquire a filly by Street Sense (hip 295) out of the same family as that 2016 GI Kentucky Oaks winner.

The dark bay yearling, bred by the late Robert Manfuso and consigned by Chanceland Farm, is out of graded stakes winner Belterra (Unbridled). The mare is also the dam of Sheave (Mineshaft), who produced Cathryn Sophia.

“Obviously, I loved the page, with Cathryn Sophia,” Zacney said after acquiring the yearling. “I've always been a fan of Street Sense. I can't tell you if I've ever had one. But once I laid eyes on this filly yesterday, she was one that I really wanted. She just stood out. She's an absolutely beautiful filly.”

The Cash is King team had another attachment to the filly.

“Most of my horses have a story,” Zacney said. “My son Alex was with me and he said, 'Dad, did you notice her date of birth?' And I hadn't. It's Mar. 5, which is Alex's birthday, too. So anything like that, we always take a second look.”

Zacney was on the grounds during Monday's first session of the Midlantic sale, acquiring three yearlings, including a filly by Tonalist (hip 90) for $110,000. But he did his bidding on the phone Tuesday and watched on his computer as the filly's price momentarily stalled.

The yearling filly is already a winner, having been named grand champion of the Maryland Horse Breeders Association's Yearling Show in Timonium in August.

“She is a lovely filly, which was why she was champion at the show,” said Chanceland Farm's Katherine Voss. “But the pedigree had nothing to do with that. She has a gorgeous pedigree–they are hard to come by with a Kentucky Oaks winner in the family and by Street Sense as well.”

Manfuso, who passed away last March, and Voss have a long association with the yearling's family. Manfuso bred and campaigned Belterra to a win in the 2001 GII Golden Rod S. and a third-place effort in the following year's GI Ashland S. Manfuso also bred Belterra's dam Cruising Haven (Shelter Half).

“She was one of the last ones that Bob bred,” Voss said of hip 295. “We bred her grandmother. And this is Belterra's last foal. I would have loved to have kept her because she's the kind that you want to keep.”

While Voss acknowledged the Midlantic sale has gained in strength, she still sees a ceiling on the top of the market.

“I think it's better than this sale has been for the last few years–it's definitely better than the last couple of years,” Voss said. “I think the market in general is stronger this year. Keeneland was really strong. But it still feels like there is a little lid on Maryland. They are not going bonkers. We are bringing some nice, solid useful horses and they can go for $75,000 or $80,000 and you get $50,000.”

Cary Frommer stayed busy throughout the two-day Midlantic sale, but saved her biggest purchase of the auction for last when going to $200,000 to acquire a filly by GI Kentucky Derby winner Nyquist (hip 441) from the consignment of Becky Davis.

The yearling is out of How My Heart Works (Not For Love), whose first foal is stakes winner and graded placed Monday Morning QB (Imagining). She was bred by Davis's father Tom Bowman and Milton Higgins, III.

“I have liked her since the day she was born,” Davis said of the yearling. “She was always super spunky and had grit. She is super classy to deal with. She has always been an outstanding filly–just a little different than the rest of the fillies at the farm. I thought she was pretty special.”

How My Heart Works, who has a weanling colt by Arrogate and was bred back to Nyquist this year, was also bred by Tom and Chris Bowman and Higgins. She won first-out at Laurel in 2015, but failed to hit the board in three subsequent starts.

“We've had the whole family,” Davis said. “Her mom was a super impressive yearling, but had an injury and didn't race to her full potential, I don't believe. We kept her as a broodmare and her first foal has shown he has talent.”

The filly, one of three to hit the $200,000 mark Tuesday, marked a sweet ending to an eventful sale for Davis, who was forced into an unexpected trip to the hospital Sunday.

“At the end of the day Sunday, we were closing up and I was told one of the horses had banged his head,” Davis explained. “He had a scrape and I had some silver spray and I went in with one of my best handlers because I could tell he was agitated. I put a little bit of spray on the cut and I could tell from the look in his eye he was not ok with it. I wasn't going to spray him again, but his forelock was stuck to the cut, so I put my hand up to move his forelock over and he came at me. I was able to turn around, but he struck me about four or five times in the back of my head. I don't remember if someone opened the door or if I climbed over the door, but I got out. It was pretty scary.”

Davis watched the Nyquist filly sell from the back of the sales pavilion.

“Yes and no,” she said with a laugh when asked if the sale made up for the injuries she suffered Sunday. “The best thing for me is if that filly gets into a good racing home and I get to see her race. I think she can be a superstar. She is all that everybody wants to have in a racehorse. And even beyond that, she has such a great personality, she's going to have a great second career as a broodmare or something else. So I am excited to see her.”

Lawley-Wakelin Gets His Fairytale Ending

Patrick Lawley-Wakelin got outbid on a filly by Lemon Drop Kid when bidding on behalf of Liz and Michael Burns at last year's Midlantic sale, but the bloodstock agent came back in 2021 to buy that filly's half-sister by Hard Spun (hip 378) for $125,000 Tuesday in Timonium on behalf of the Burnses' Cambus-Kenneth Farm.

“Liz and Michael love Lemon Drop Kid and so they said, 'Why don't you look at her and see if we can buy her,'” Lawley-Wakelin said. “We tried to buy her, but we ended up underbidders. The filly went for $92,000.”

“When I saw Audley was selling the half-sister by Hard Spun, I picked up the phone and said, 'Listen guys we are back at it again.' They said, 'OK, let's look at it,” Lawley-Wakelin said. “The filly vetted great for us. She is a two-turn filly, like the Lemon Drop Kid filly. She's going to need a little bit of time to mature, which falls right into their program.”

Of the Burnses, who are based in Danville, Kentucky, Lawley-Wakelin said, “They are generally looking for a Classic-type of filly. They were introduced to the game by John R. S. Fisher and he introduced me to them. So I've known them for about 25 years. They are a wonderful couple. So I am truly excited we were able to get this filly.”