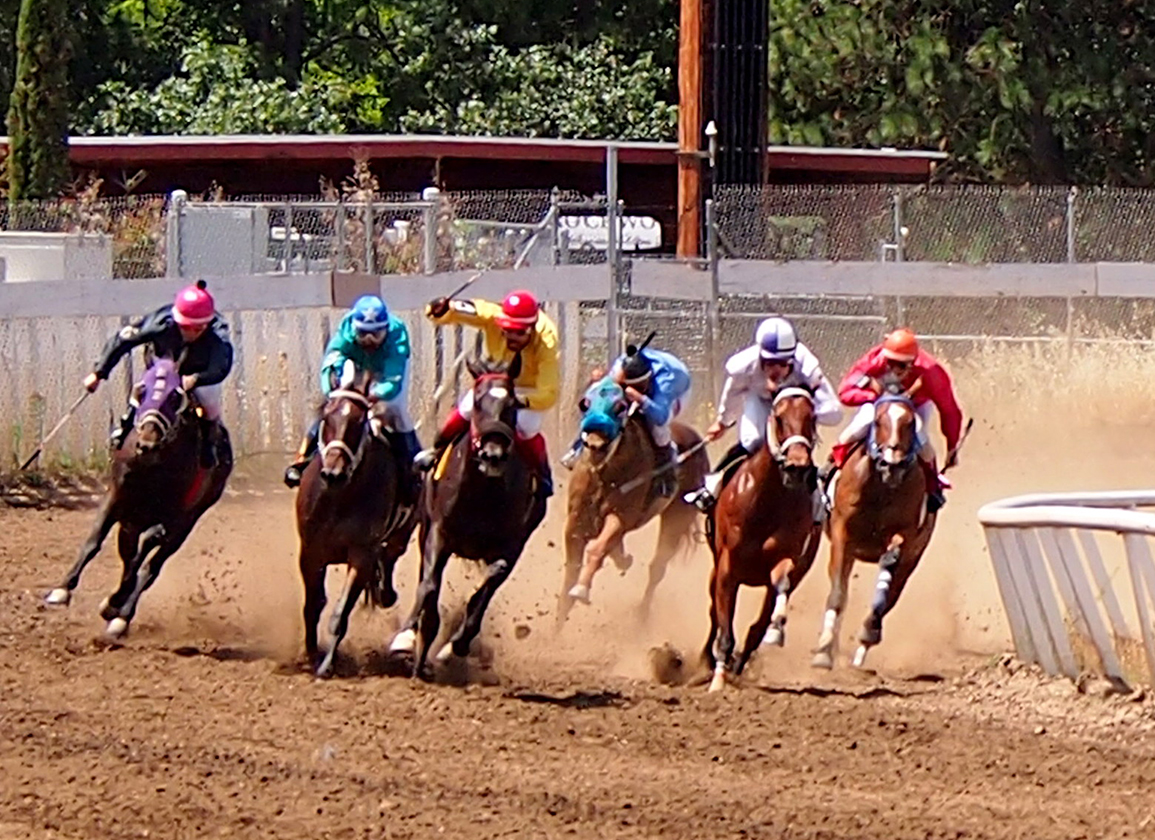 Nine days after the devastating news that Grants Pass Downs has called off its 2022 race meets and will let the track's commercial license lapse, Randy Boden, the executive director of the Oregon Horsemen's Benevolent and Protective Association (OHBPA), revealed that plans are in the works to keep the southern Oregon track open for training and possibly a short fairs-style race meet this summer, with the ultimate goal of bringing back a larger slate of racing in 2023.

“When it became apparent that [Grants Pass Downs] was not going to renew their commercial license, we decided that the best thing was for the HBPA to seek that license for itself for the continuation of the commercial meet as well as the obvious benefits of the off-track betting (OTB) network,” Boden said during the Apr. 21 Oregon Racing Commission (ORC) meeting.

“Obviously, the cancellation of Grants Pass Downs has us scrambling a little bit,” McGrail said. “Although things are a little grim right now, there is a path forward if we can get to use that facility. It's been improved dramatically, and it really is a track that we can have some really lengthy and good meets at. So those improvements do provide an opportunity for us down the road.”

McGrail continued: “We are working towards, hopefully, a successful summer fairs season…. That track at Grants Pass is a vital training facility, even if it's not running a commercial meet. And without it, it's hard to see how our horsemen and women will have a chance to get their horses legged up in time to run at these fair meets.”

Travis Boersma took over Grants Pass Downs, which is located on the Josephine County Fairgrounds, in 2019. After making substantial capital improvements and seeking historical horse race gaming to fund the racing there, the ORC recently voted to deny an operating license to the gaming part of the operation based on a Department of Justice opinion that called the project unconstitutional because of the way the state's gambling laws are set up.

So on Apr. 12, Boersma pulled the plug on the upcoming racing season, stating that “Grants Pass Downs has lost its economic engine.”

“I'm saddened to say that we just didn't have enough horses to run a successful commercial meet,” Evers said in a succinct presentation to the commission. “The horsemen and women have until Apr. 30 to exit the backside. At that time it will be closed. We do have a few horses left over and a few recreational vehicles that we've been assured will all be leaving next week.

“The plan is to operate the off-track-betting OTB network until June 30. That's when [the] racing license expires. That continues to bring in some revenue for our horse associations; the racing commission, and provides the opportunity if someone else wants to take over the OTB network and the commercial racing license at that time.”

That's where the OHBPA would step in.

“That is our plan,” Boden said. “We're going to be in that process. As you guys know, it's a very extensive thing…to have everything in place so that there is no lag time between June 30 ending and July 1 beginning, so that there is no stoppage of the OTB network.

“We also have received a list of equipment from [Grants Pass Downs] that's available to be purchased for us to continue,” Boden said.

“Obviously we'll need the correct equipment to run a race meet, everything from starting gates to the stalls to tractors, et cetera, et cetera, all down the line. So we are going through that list as we speak, and we'll be acquiring as much of that as we can to further our goals in that regard.”

Two years ago, Oregon's racing community rallied around Grants Pass Downs, which transitioned from a fairs track to being the lone commercial licensee in Oregon after the closure of Portland Meadows. Grants Pass carved out a 35-date, split-meet season over two staggered meets, May through July and September through November.

The plan was for Grants Pass to dovetail with the state's four summer fairs meets. The Eastern Oregon Livestock Show meet in Union traditionally kicked off that circuit in June. Crooked River Roundup in Prineville then followed in July. Tillamook County Fair in Tillamook ran in August. Harney County Fair in Burns rounded out the fairs circuit in September.

Then the COVID-19 pandemic wiped all four fairs off the map in 2020, and Grants Pass Downs supported the circuit alone.

The start of 2021 looked promising. But by May, Harney executives told the ORC it wouldn't be running.

In July, jockey Eduardo Gutiérrez Sosa was killed in a Quarter Horse racing accident at the Crooked River Roundup.

Nov. 9, 2021, was the final day of the Oregon racing season. It turned out to be an ominous premonition when the half-mile oval at Grants Pass was plunged into complete darkness eight seconds into the running of the final race when the track's lights cut out unexpectedly, leaving the field of six sprinters barreling blindly into the first bend of a three-turn race.

There hasn't been a sanctioned horse race in Oregon since.

“We are further looking into the possibility of working with Southern Oregon Horse Racing Association (SOHRA) to see if there's a possibility of running a short race meet in between the end of Union and the start of Prineville,” Boden said. “Currently, since we have no racing license until June, we have no standing to run a race meet as the HBPA, but SOHRA has many years of experience running race meets at Grants Pass [prior to Boersma taking over].”

Boden said that SOHRA had a meeting scheduled for Thursday evening, beyond deadline for this story. He expected them to discuss and possibly vote on working with the OHBPA to bring racing back to Grants Pass.

“And if it works out that [SOHRA] would like to do that, then we would have to be willing to fund that meet to go forward that way,” Boden said. “That would be the optimal thing.”

Boden then focused on the fairs meets.

“We've got to get something open for training. These horses are not fit. They are not ready to run,” Boden said. “And so the last thing we want is for the horses not to be ready for the rest of the fairs, because that will be a negative thing on the fairs and the population of horses that are ready to go there-as well as the fact that some of the horses may wind up going to Wyoming or Montana. And any horse that goes that far away is not going to come back to run at our fairs.

“We want to keep our horses in the state as much as we can. We want to be able to offer the horsemen a place to train, and make sure that if nothing else happens, that we have a very successful summer fairs season. The fairs are important to all of us, and we're going to support them all the way down the line,” Boden said.

“Ultimately, going forward, we talk about '23, we'll be able to once again put a commercial race meet together and allow for us to get our legs back under us a little bit in that regard.”