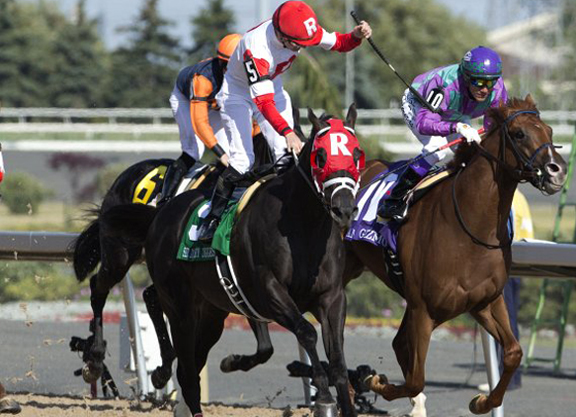 Trainers Wesley Ward and Mike Maker have filed separate lawsuits against owners Ken and Sarah Ramsey over unpaid training bills. Ward is alleging that the Ramseys piled up unpaid bills totaling $974,790. Maker claims the Ramseys owe him $905,357. The story was first reported in Paulick Report.

When reached Monday by the TDN, Ken Ramsey admitted that he owes both trainers a considerable amount of money.

“The root of my problem is the fact that I bought three big horse farms over the last two years and I have a cash flow problem,” Ramsey said. “My net worth is better now than it's ever been. Overall, I am good. However, I have been delinquent and I'm not making light of the fact that I do owe these two trainers. These are the only two trainers I have left and every trainer I have ever had, over 50 of them, have all been paid in full. I never beat any of them out of anything whatsoever.”

Ramsey said that he will take out loans, using the collateral he has built up in the horse farms and other properties, and use the proceeds to pay off Maker and Ward.

“I thought I could ride this out,” he said. “I am embarrassed by this and hurt by this.”

According to Ward's filing, the Ramseys have been making regular monthly payments, but did not pay enough to keep the balance owed from escalating. In February alone, Ward billed the Ramseys for $98,657.40 for care of 30 horses. Ward lists 45 horses that he trained for the Ramseys from June, 2020 to the present. Due to being claimed or other factors, not all remain in Ward's care.

Ward is asking the court to order the Sheriff of Jessamine County to sell the Ramsey horses, with the net proceeds going to Ward to help pay off the debt.

Maker contends that a debt of $543,597 is more than 90 days overdue and that the Ramseys have been delinquent when it comes to paying their bills for about four years. Like Ward, he will seek to be repaid in part by the sale of the Ramsey horses. However, only three Ramsey horses remain in his barn and their combined value falls way short of $905,357.

The Ramseys have cut back on their stable after peaking in 2013 with 230 wins. According to Equibase, they have run 38 horses so far this year with five wins for earnings of $112,115. Four of the wins came in lower level maiden claiming races at Turfway Park. They have used numerous trainers over the years, but all of their 2021 starters were trained by either Ward or Maker.

The Ramseys have won the Eclipse Award as the nation's outstanding owner four times, in 2004, 2011, 2013 and 2014. They were named outstanding breeder in 2013 and 2014. Their best horse was Kitten's Joy, who earned over $2 million. He became a standout sire for the Ramseys, who stood him at their Nicholasville, Ky. Farm until he was relocated to Hill 'n' Dale in 2018.