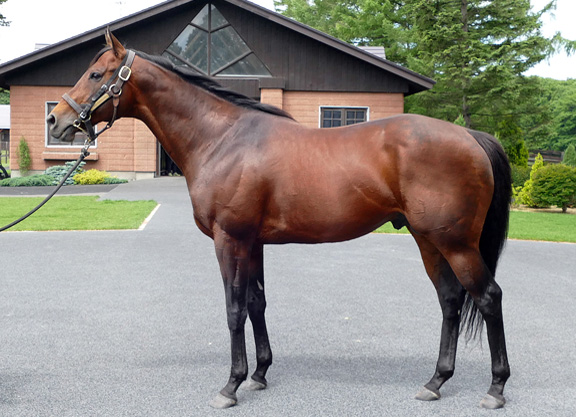 In the space of a fortnight, Shadai Stallion Station lost its two flagship stallions, Deep Impact (Jpn) on July 30, and King Kamehameha (Jpn) on Aug.10. The pair won back-to-back runnings of the Tokyo Yushun (Japanese Derby) in 2004 and 2005. A year older than Deep Impact at 18, King Kamehameha had been pensioned earlier this year and his legacy at stud was outlined by Kelsey Riley in Saturday's TDN.

Losing two such heavyweights in the same year is doubtless a blow to Shadai but in Japan's stallion table for this year, King Kamehameha is joined in the top six by two of his sons—Rulership (Jpn) and Lord Kanaloa (Jpn)—while two Shadai-based sons of Sunday Silence other than Deep Impact—Heart's Cry (Jpn) and Daiwa Major (Jpn)—currently feature in the top seven. Further consolation can be found in the GI Arlington Million victory of Bricks And Mortar (Giant's Causeway). The breeding rights to America's leading turf horse were secured by the Yoshida brothers in the days leading up to the race and he will retire to Shadai after the Breeders' Cup.

Deep Impact remains way out in front on the sires' list and is likely to hold that distinction for several years to come while the hunt goes on for his successor. Six of his sons currently occupy the Shadai roster.

Deep Impact's major earner this season is the Derby winner Roger Barows (Jpn), who will sadly not be seen on the racecourse again after it was announced last week that he will be retiring to stud following a bout of tendonitis. His exit from the racing scene at the age of only three in a country where it is pleasingly routine for the top performers to race on until the ages of six or seven was perhaps expedited by his sire's regrettable death.

Only last year we were witness to two European Classics falling to sons of Deep Impact with the victory of Saxon Warrior (Jpn) in the 2000 Guineas followed by Study Of Man (Ire) in the Prix du Jockey Club, and in the last week Lord Kanaloa (Jpn) posted his first European winner. The Johnny Murtagh-trained Know It All (GB), a half-sister to the Group 3-winning sprinter Astrophysical Jet (GB) (Dubawi {Ire}), struck at the Curragh for her breeder Qatar Bloodstock on her second start and could head next to the G2 Debutante S.

Members of Lord Kanaloa's first crop are only four and they are led by Almond Eye (Jpn), whose versatility was exemplified by her Triple Tiara success before she set a new record time in the Japan Cup over 12 furlongs and then dropped back to nine furlongs to win the G1 Dubai Turf. Her longed-for foray into Europe did not come about, but she ran with great credit when third in the Arima Kinen over a mile and her sire's flag was flown again this summer when Saturnalia (Jpn) became his latest Classic winner in the G1 Satsuki Sho (Japanese 2000 Guineas). Lord Kanaloa, has likely been extra busy this covering season in the absence of his sire and partial absence of Deep Impact, though in his first five years at stud he never covered less than 250 mares, and in 2018 that figure rose to 294. He is certainly a stallion of whom we will be hearing much more in the years to come, hopefully in Europe as well as in Japan.

French King Rules Germany
The Night Shift branch of the Northern Dancer sireline hangs by several threads, and perhaps its most celebrated member in this part of the world in recent years was the National Hunt stallion Midnight Legend (GB), who died in 2016 at the age of 25.

Night Shift's former Spanish-based son Dyhim Diamond (Ire) gave the line a lift a little while back when his G1 Prix Jean Prat winner Turtle Bowl (Ire) made an eye-catching start to his own stud career at Haras de Montaigu. The exploits of his first-season representatives Lucayan (Fr) and French Fifteen (Fr) in particular raised the interest of the Yoshida brothers, who bought Turtle Bowl to join Shadai in time for the 2013 covering season. Sadly he lived for less than five years after that before succumbing to a heart attack. But the G1 Poule d'Essai des Poulains winner Lucayan and French Fifteen, who was runner-up to Camelot (GB) in the 2000 Guineas, are both now at stud themselves and the latter was represented by his first Group 1 winner on Sunday.

Unholy Criticism
It was disappointing to hear on Sky Sports Racing such criticism about the weakness of Europe's mile division after the victory of Robert Ng's Romanised (Ire) (Holy Roman Emperor {Ire}) in the G1 Prix du Haras de Fresnay-le-Buffard Jacques le Marois. Yes, Too Darn Hot (GB) has fallen by the wayside, and Laurens (Fr) wasn't there, but Romanised is hardly some colt from the wrong side of the tracks.

He's a Classic winner whose form this season has improved steadily, run to run, from finishing fourth in both the Lockinge and the Queen Anne before winning the G2 Minstrel S. and then beating a field which included recent G1 Coronation S. winner Watch Me (Fr), last year's Jockey Club winner Study Of Man (Ire) and Poule d'Essai des Poulains runner-up Shaman (Ire) on Sunday.

Romanised also served a reminder to breeders queuing up for unproven fashion among the freshman ranks that his sire Holy Roman Emperor remains one of the best value proven sires in Europe. His fee for the last two seasons has been just €15,000, and for a good-looking former top-notcher of a juvenile, who has proved as adept with fillies as with colts, and of appeal to the rich Hong Kong market, he's a much safer bet than many stallions out there.

The British and Irish domination of France's group races continues, but it was good to see a different face in the winner's enclosure at Deauville as the understated Ken Condon went up to collect the trainer's prize for his stable star.

Freshman Firsts
Along with the excitement of a first domestic Group 1 winner for Ger Lyons with the impressive Siskin (First Defence) in the Keeneland Phoenix S., the trainer was also associated with another first this week, this time for the Irish National Stud stallion Free Eagle (Ire), for whom the listed Coolmore Caravaggio S. win of Justifier (Ire) was a first black-type success.

The stakes are rising in the freshman championship, quite literally, with Hot Streak (GB) having his first listed winner in France last weekend via the Richard Fahey-trained Flaming Princess (Ire), while Golden Horn (GB)'s daughter West End Girl (GB) won the G3 german-thoroughbred.com Sweet Solera S. at Newmarket. The latter, out of a Dansili (GB) half-sister to top sprinter Reckless Abandon (Exchange Rate), was bred by Car Colston Hall Stud, which brings a rather nice link to the race sponsor, as one of the most famous graduates of the Nottinghamshire farm is Soldier Hollow (GB) (In The Wings {Ire}), who is now the leading sire in Germany.

They breed 'em tough at Car Colston Hall. The diminutive Soldier Hollow won 12 of his 31 races, including four Group 1s, racing successfully until he was seven. His fellow graduate Brando (GB) (Pivotal {GB}) is another such example. The half-brother to dual American Grade I winner Ticker Tape (GB) (Royal Applause {GB}), and indeed to West End Girl's grandam Sant Elena (GB) (Efisio {GB}), is also still in training at seven. Now the winner of nine of his 35 races, including the 2017 G1 Prix Maurice de Gheest, he was last seen being beaten only a neck for second in that same race by Advertise (GB) (Showcasing {GB}) on Aug. 4.

Charlie's Angel
We all love Enable (GB) (Nathaniel {Ire}), of course, but giving her a good run in the race to be considered the best European-bred mare in training is the admirable Sistercharlie (Ire) (Myboycharlie {Ire}), who won her second GI Beverly D S. on Saturday and her fifth straight Grade I (sixth in total) since joining Chad Brown's stable.

We'll be hearing plenty more of this family come Saturday night when her Fastnet Rock (Aus) half-brother goes through the ring at Arqana's August Sale as lot 21. Their dam Starlet's Sister (Ire) (Galileo {Ire}) hardly needed another update for she also has provided this year's G1 Prix du Jockey Club winner Sottsass (Fr) (Siyouni {Fr}), but her eldest child continues to do her proud.

The Ecurie des Monceaux draft was also given a boost in the G1 Arlington Million courtesy of an admirable performance from Magic Wand (Ire) (Galileo {Ire}), who was runner-up to Bricks And Mortar. Her Dubawi (Ire) half-sister will sell on Sunday evening as lot 148.