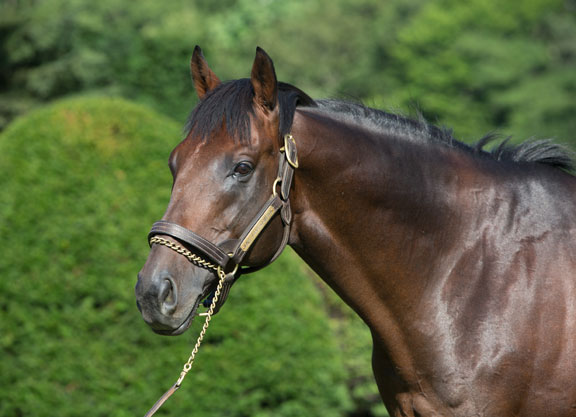 King Kamehameha is out Manfath, who raced in Britain for Sheikh Hamdan but failed to find the winner's enclosure in seven outings. Manfath was offloaded for 4,200gns at the 1994 Tattersalls December Mares Sale, and proved to be an incredible bargain when her first live foal, The Deputy (Ire) (Petardia {GB}), went on to win the GI Santa Anita Derby in 2000. Manfath, by that point, had already been expatriated to the U.S., and she was sold to Katsumi Yoshida at Keeneland November in 2000 carrying King Kamehameha for $650,000.

King Kamehameha won seven of his eight starts over the 2003/2004 seasons. Unbeaten in two outings at two, he finished third on his 3-year-old debut but would not lose again. He won the G1 NHK Mile Cup by five lengths in early May and three weeks later stepped up to a mile and a half to win the G1 Tokyo Yushun (Japanese Derby), opening Kaneko's Derby double that would be completed by Deep Impact the following season. King Kamehameha ran just once more, winning the G2 Kobe Shimbun Hai in September before retiring to stud.

Just as he had done on the track, King Kamehameha hit the ground running in his second career, earning the title of champion sire of 2-year-olds in his first two years with runners. In 2010, when his first crop was four, he earned his first of two consecutive champion sire titles. Were it not for Deep Impact coming along with his first runners in 2010, King Kamehameha would have taken nine straight sire championships; he was second to his barnmate annually from 2012 through 2018, and at the time of his death he sat fifth on the 2019 sires' table, with his books having been limited to 100 mares or fewer from 2014 onwards.

Rulership and Lord Kanaloa will ensure that King Kamehameha's legacy lives on. Rulership was champion first-season sire in Japan in 2016 and his first-crop son Kiseki (Jpn) won the 2017 G1 Kikuka Sho. Lord Kanaloa followed up as champion first-season sire in 2017 and he has not yet slowed down; his flagbearers include Japan's 2018 Horse of the Year and globetrotting Group 1 winner Almond Eye (Jpn), G1 Satsuki Sho (Japanese 2000 Guineas), G1 Hopeful S. winner Saturnalia (Jpn) and G1 Mile Championship victor Stelvio (Jpn). Also standing alongside that pair at Shadai is King Kamehameha's dual Classic winner Duramente (Jpn), whose first crop are yearlings this year.