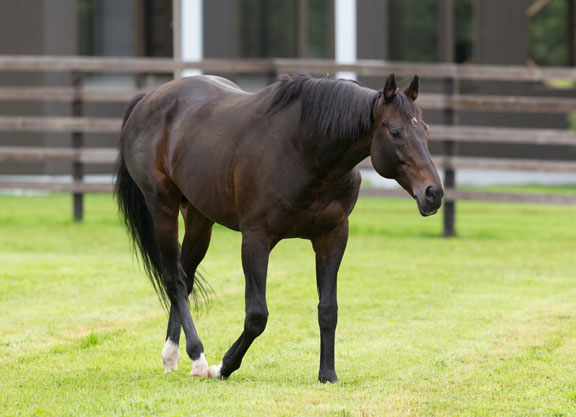 Deep Impact (Jpn) (Sunday Silence-Wind In Her Hair {Ire}, by Alzao), the Japanese Triple Crown winner who quickly rose to become one of the world’s most influential stallions, died on Tuesday, according to a release from Shadai Stallion Station. The 17-year-old underwent surgery on his spine on July 28, according to the release, and the operation was pronounced a success with a ‘stable’ post-operative prognosis. The release read, “We had been treating Deep Impact’s neck injury for some time and he underwent surgery on July 28. The operation was successful and [he] was doing well after the operation.

“However, on the morning of July 29, he was unable to stand up and we had been giving him the maximum treatment possible. On the morning of July 30, we took an x-ray and found a fracture in his cervical spine. We decided that he did not have any chance of recovery. We are extremely shocked and in grief with the sudden turn of events.”

The aforementioned neck injury had been revealed in early April when Deep Impact was removed from covering duties. About 20 foals are expected for his final crop in 2020.

Northern Farm’s Katsumi Yoshida, the breeder of Deep Impact, said, “He was, without a doubt, the finest racehorse that Northern Farm ever bred. It is just disappointing to see him go, as he was extremely successful as a stallion. I hope he is resting in peace.”

Deep Impact is the result of a mating of the Shadai group’s legendary American import Sunday Silence with the Swettenham Stud and Barronstown Stud-bred Wind In Her Hair, a dual listed winner in Britain who was second to Balanchine (Ire) (Storm Bird) in the 1994 G1 Oaks before going on to win Germany’s G1 Aral Pokal at four. Deep Impact is the seventh foal out of the mare, who also left the useful Shadai sire Black Tide (Jpn) (Sunday Silence {Jpn}). Deep Impact’s arrival marked the true passing of the baton from a great sire to his heir, as Sunday Silence died aged 16 in 2002, the year Deep Impact was born.

Deep Impact was purchased by Makoto Kaneko out of the 2002 JRHA Select Foal Sale for ¥73.5 million (£556,321/€607,110/$677,008, by today’s conversions), the 12th-highest price of the sale, and won his lone start at two before taking his first six appearances as a sophomore, including the Satsuki Sho (2000m), Tokyo Yushun (2400m) and Kikuka Sho (3000m). He tasted domestic defeat for the only time in his career when going down narrowly to Heart’s Cry (Jpn) (Sunday Silence) in the 2005 G1 Arima Kinen. Winner of the Tenno Sho (Spring) and G1 Takarazuka Kinen in 2006, he carried the hopes of a nation in the G1 Prix de l’Arc de Triomphe, but fell 3/4 of a length short in third before being disqualified to last for testing positive for a banned substance. He bounced back to add the G1 Japan Cup and the 2006 Arima Kinen before retiring to Shadai with 12 wins from 14 starts, two Horse of the Year titles, four championships overall and earnings of over $12.8-million, making him the richest-ever runner by the great Sunday Silence.

Yutaka Take, who rode Deep Impact in all 14 of his races, said, “I knew he was not in good shape, but I am disappointed to hear of the news. He is a very special horse in my life. I am just appreciative for all that he gave me.”

His now-retired trainer Yasuo Ikee added, “I am in shock of the sudden news. I could not have asked for any more in the two years-plus of his racing career. I just pray that he is resting in peace.”

Owner Makoto Kaneko, who continues to this day to splurge for Deep Impact’s best progeny at the sales and raced his 2016 and 2018 Tokyo Yushun winners Makahiki (Jpn) and Wagnerian (Jpn), expressed similar sentiments, saying, “It was shocking to witness how easily he won the Triple Crown, and I am thankful for what he showed us. The most emotional moments were winning the Japan Cup and the Arima Kinen consecutively, after his loss in the Arc. Not many horses become stallions after their 4-year-old season, but he was also extremely successful as a stud. He gave me two more Derby winners, Makahiki and Wagnerian. I am in tears hearing this sudden tragic news. May he rest in peace.”

Deep Impact has more than lived up to his moniker as a stallion, having sired no fewer than 42 Group 1 winners at home and abroad. He has accounted for five winners of the Tokyo Yushun (Japanese Derby) since his first foals turned three in 2011, his son Roger Barows (Jpn) having become the latest victor of that colts’ Classic earlier this year. He was champion sire seven times and sired group stakes winners in seven countries-Japan, the UAE, Hong Kong, France, Australia, Great Britain and Ireland. At the time of his death, Deep Impact led all sires in Japan in 2019 with earnings of ¥4.44-billion, more than double the ¥2-billion thus far accrued in 2019 by Heart’s Cry.

Deep Impact has sired to date 135 black-type winners, including 113 at group level. He has been represented by 16 champions and his leading earner is the two-time Horse of the Year Gentildonna (Jpn), winner of the Japanese fillies’ Triple Crown, two Japan Cups and a Dubai Sheema Classic. She is one of the highest earners in the sport globally with prize money totalling over $18-million.

Deep Impact has left a legacy not just in his country of birth, but all across the globe. A Shin Hikari (Jpn) made headlines when winning the 2015 G1 Longines Hong Kong Cup and the 2016 G1 Prix d’Ispahan, while Real Steel (Jpn) and Vivlos (Jpn) won Group 1s on the Dubai World Cup card.

The Wildenstein family was an early supporter of Deep Impact and they were rewarded with his second-crop daughter Beauty Parlour (GB), winner of the 2012 G1 Poule d’Essai des Pouliches. Beauty Parlour was purchased by Peter Brant’s White Birch Farm from the Wildenstein dispersal at Goffs November in 2016 for €1.6-million, and her second foal, the 3-year-old filly Blowout (GB) (Dansili {GB}), finished second in the G3 Lake George S. at Saratoga on July 19 for trainer Chad Brown and has been first or second in all five starts thus far.

Deep Impact had subsequently been championed by the best breeders internationally, principally as a much-needed outcross, and as a result he was responsible for two Classic winners in Europe last year: Coolmore’s G1 2000 Guineas and G1 Racing Post Trophy victor Saxon Warrior (Jpn), who stood this year in Tipperary for €30,000, and the Niarchos Family’s G1 Prix du Jockey Club winner Study of Man (Ire), who remains in training with Pascal Bary and who keeps hinting at a return to top form, with seconds in the G1 Prix d’Ispahan and G1 Prix Ganay and a third in the G3 Prix Messidor this year. The use of Deep Impact has also yielded Coolmore the talented filly September (Ire), a listed winner and three times Group 1-placed as a 2-year-old, and Saxon Warrior’s listed-placed sister Pavlenko (Jpn). This Deep Impact story line could still be very much in its infancy, with other Coolmore mares sent to Hokkaido in recent years including the brilliant Classic-winning daughters of Galileo, Minding (Ire) and Winter (Ire), as well as two full-sisters to Saxon Warrior’s dam Maybe (Ire) (Galileo {Ire}), Fluff (Ire) and Promise To Be True (Ire).

Deep Impact has also been patronized in Australia, where his sons Real Impact (Jpn) and Tosen Stardom (Jpn) have won Group 1s. Tosen Stardom now resides at Woodside Park Stud, with Real Impact formerly shuttling from Shadai to Arrowfield Stud. While Real Impact, whose first Australian crop officially turns two this week, wasn’t on the plane to Australia this year, Arrowfield has still shuttled Deep Impact sons Real Steel and Mikki Isle (Jpn). Saxon Warrior will stand the upcoming Southern Hemisphere season at Coolmore Australia, while two sons of Deep Impact are available in New Zealand: Satono Aladdin (Jpn) at Rich Hill Stud and Staphanos (Jpn) at Novara Park Stud. The most anticipated Deep Impact progeny to set foot in Australia has yet to be born, however, as Winx’s dam, Vegas Showgirl (NZ) (Al Akbar {NZ}), is currently in foal to him.

Though still in his relative youth as a broodmare sire, Deep Impact has sired the dams of seven stakes winners, four at group level, including fellow Kikuka Sho hero Kiseki (Jpn) (Rulership {Jpn}). His legacy as a sire of sires will be given every chance to thrive at Shadai with six of his young sons on the roster: G1 Tokyo Yushun and G2 Prix Niel winner Kizuna (Jpn), Mikki Isle, Real Impact, Real Steel, Satono Aladdin and dual Group 1 winner Satono Diamond, Deep Impact’s second-highest ever earner.

Deep Impact’s legacy is perhaps made all the more remarkable by the fact that he wasn’t the towering physical specimen that his legend, or even his ominous name, suggests. The diminutive Deep Impact was proof that when it comes to Thoroughbreds, great things really do come in small packages. He embodied everything that anyone who has ever been involved with a Thoroughbred dreams of accomplishing, and he will be sorely missed by racing and breeding enthusiasts across the globe.