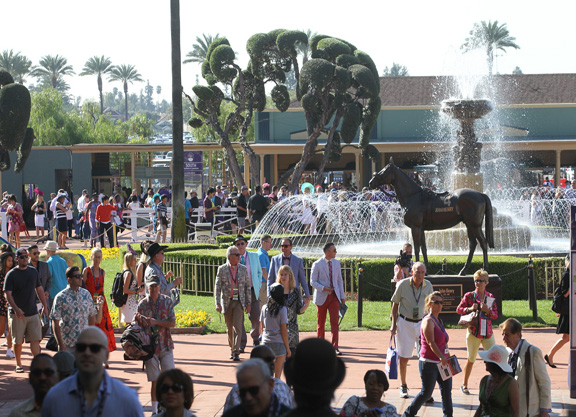 When Aidan Butler, The Stronach Group (TSG)'s chief strategy officer, arrived at Santa Anita earlier this Spring, he did so in the midst of a welfare crisis unfolding on a national stage.

Since then, TSG has solidified Butler's position within the company, where he will additionally serve as acting executive director of California Racing Operations. In terms of the crisis, Del Mar's summer meet–at which there were no race day fatalities and only four training-related deaths, two of which were the result of a freak accident–has had the effect of ameliorating the intense scrutiny.

With racing set to resume at Santa Anita Sept. 27, Santa Anita has just released its rules and conditions for training and racing this fall–a two-page, 13-point document that tightens the policies implemented in the spring, closely resembling the processes in place at Del Mar this summer. In this first of a two-part Q&A with TDN, Butler discusses his new role in TSG, the safety protocols in place, and plans for the facility going forward.

The following is an edited version of a long conversation that proved wide-ranging and discursive.

TDN: How does your role overlap with TSG COO Tim Ritvo? Who makes the day-to-day decisions?

AB: I'm overseeing everything in California. What are all those parts? Obviously, there's racetrack operations. How the industry works, meaning the relationships between the TOC [Thoroughbred Owners of California] and the CTT [California Thoroughbred Trainers]. How we work with Del Mar. How we work with bigger picture stuff like stabling. Then, how the money is divided up–how the money that's taken out is best used.

One of the biggest benefits that we have, we have the beauty of California. It's a beautiful place to live. The fact that we are light on purses, we've got to address that. Is that via looking at subsidies? Looking at a different format? Yeah, all of it–it's not an easy fix. One thing that rings true is if we can get safe racing, we have a happy ecosystem, we're halfway there. People love the place and people want to be in California.

TDN: In terms of the safety protocols for the fall, I understand you're still requiring 48-hour notice before every work–something Del Mar didn't require during their summer meet that was a success safety-wise.

AB: The reason we still want that is because I want to know my constituents. I want to know who's on the track at any given point, and if you don't know who's going to go out there, it's very difficult to then, heaven forbid something happens, to know why or where it happened. That can be seen as a little overbearing, but I think the benefits the racing office gets out of it are worth it.

We get to know who's fit, and once you get to know who's fit, you know who's going to be ready. I understand how a lot of stuff is taken in the negative–you're trying to tell us how to train. Which is a criticism and I'll take that. But that isn't the intent. I think going forward, with the limited population we've got, the more data the better. The more we know, the better the racing office can perform.

TDN: In the event there's another wet winter, do you have a plan of action in place and are taking into account the flex dates recently added to the calendar?

I'm blessed. I've got years of experience around me. As a manager, there's the old adage, 'you don't want to be the smartest guy in the room.' You want the smartest guys in the room giving you advice, then you make a decision on the best advice you've got.

AB: If the track gets messy and sloppy, we're going to back-off a lot of stuff. So, can you let the horses go out there and gallop? Yeah–course you've got to let them. But, the old adage, 'if it isn't good enough to race on, then it shouldn't be good enough to train on,' should ring true, right? Consistency of surfaces–it's got to be consistent. I hope the horsemen understand that everything we do now is with the best possible safety of the horse in mind. On the main track, we've put in some brand-new drainage on the rail. Pray to God, we don't see the weather. But if it does, and when it does, we're going to monitor it really closely.

TDN: When it comes to horse welfare, a big part of the issue concerns the environment in which they live. Trainers have long called for improvements to the barn area. Will that finally happen under your watch?

AB: It is definitely something we're working on. We need a solution to long-term training. Constantly beating Santa Anita up ten months of the year because there's so many horses working over it, that's probably not the smartest play. We're lucky we've got San Luis Rey. We're looking at various plans to maybe grow San Luis Rey out, which I think would be good. Beautiful place to train.

TDN: You've got some regulatory hoops to jump through first to do that though, right?

AB: We're working on that. As to the matter at hand, the stables [at Santa Anita] aren't the best, and what's worse, there's no turn-out pens. Is the plan, I'm going to rock up tomorrow, promise that we'll knock them down? The reality is, there's no money to do that in the big scale of things–$50-$100 million to build a new set of barns? But, is there the ability to start to improve them? Yeah. Is there the ability to look at how we program around that? Yeah.

TDN: Are you still planning to build 800 new stables in the north parking lot?

AB: That's on hold at the moment for a few different reasons. One, I would rather put more horses at San Luis Rey, where there are less horses. Is it wise to have another 800 horses at Santa Anita? That would be close to 2,800 horses. I don't know. My preference would be to reduce the amount of traffic on a daily basis at Santa Anita.

TDN: That's one of the reasons Del Mar's safety record has improved so markedly the past few years.

AB: Yes. But on that point, when you look at Santa Anita, it's one of the biggest training centers in the U.S. Every day, thousands of horses going over it. So, the difference between Del Mar, a ten-week meet, and us, we're relentless every single day [for ten months]. Having one track open for the vast majority of the year is not ideal on a bunch of fronts.

TDN: What's going on with Pomona?

AB: Just wished they hadn't ripped the track up, that's all I'll say.

TDN: Could it still be developed as an auxiliary training center?

AB: I've actually had a couple meetings. They're great, the people who run it. They want to look at what we can do there. You'd have to put a track in, first and foremost. Believe it or not, that's one of the biggest issues–having horses in a metropolitan built-up area, the environmental piece to it. Santa Anita, Del Mar, they're older places. They're established. There's rules and regulations that we've worked with over time. But when you cease to be and then restart, the rules are pretty tough.

There are four or five places we're considering for auxiliary stabling. Some are completely new, from building a California industry training center like a Palm Meadows, through to patching together one of the older places, like a Pomona or a Galway. It takes up a lot of my time, working really closely with the TOC, Del Mar, to see what that looks like. San Luis Rey is one of those factored. It's beautiful down there.

But, my intention isn't to come out here and make a bunch of promises. People have been promised enough through the years out here. So, my aim is, we're going to work as best we can together, really try and find improvements where the improvements are needed.

TDN: One of those areas for improvement is in the wedge that was driven between TSG and the horsemen during the spring. How do you propose to fix that?

AB: It isn't a modern thing–historically, it's been a little tough. Without saying who's right and who's wrong, it's easy to point fingers when things aren't going right. I think what happened this year, the awful events, we reacted really quickly. Things like a lot of medication reforms, they were done on an expedited basis, which you can understand, right? I feel the horsemen feel–and I don't blame them for this–everything got parked on them. The finger-pointing was on them, which wasn't fair–99.99% of them are doing a stand-up job.

Now, it's tough. When there's a crisis going on, you start to move quickly, and it isn't always that easy to bring everybody on board. The intent was never to shift the blame–I know how it may have looked that way. But we are where we are. I know there's a little bit of bad blood, so my job now, you have to get a bit of trust back, and trust is earned.

I'll tell you what we can do: communicate with the horsemen. That's number one. We've got to be a little more collaborative–show the horsemen that we're all on the same side. How? It's not going to be easy. They've got to understand that I understand that without them firing on all cylinders, nothing's going to work out here.

In part two of the Q&A, Butler discusses his history in horse racing, and his plans to tackle a depleted horse inventory, boost handle, and lure new owners to the game.