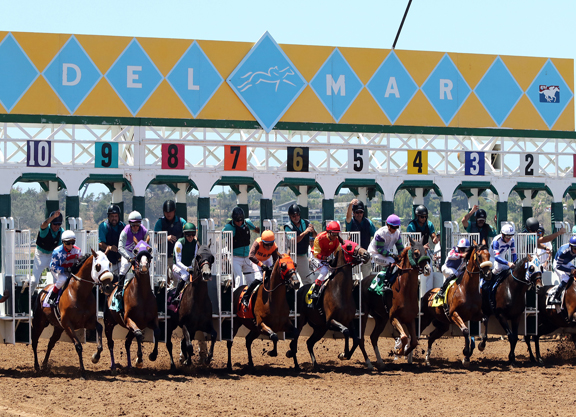 Given events at Santa Anita in the spring, it was understandable that Del Mar racing secretary David Jerkens approached the track's annual summer meet with both hope and a certain amount of trepidation.

In the end, the track achieved what Jerkens called “unprecedented”–the entire seven week, 36-card meet played out with zero race-day fatalities. That works out to 0 for 2,372 starts. Of the four catastrophic injuries sustained during morning training, two were the result of a freak accident involving a loose horse.

It's important to note that these numbers build upon the progress Del Mar has made in the area of safety over the past three years, with significant changes first instituted in 2017. Last year, for example, there were two race-day fatalities the whole summer meet, one of which was the result of clipped-heels.

The aftershocks from what happened this spring were felt in other ways, however. According to Jerkens, the horse inventory in Southern California is down some 350 horses. As a result, Del Mar carded 21 fewer races compared to last year–a drop of 7%. Total all-source handle topped $432 million, what amounted to a 10.9% decrease on last year after growth of nearly 7% in 2018 and more than 5% in 2017. On-track attendances also dipped nearly 14% over last year's totals.

Nevertheless, that Del Mar maintained a five-days-per-week schedule means that it's the only track in California, since the welfare crisis erupted, to do so. Jerkens spoke with TDN about his thoughts on a meet that wrapped Monday. The following remarks have been lightly edited for clarity.

TDN: The big takeaway from this meet is this rather remarkable stat: no equine fatalities during race day. What do you attribute as the primary reasons for this?

DJ: We put an emphasis on safety, right–that was our main focus going into the meet. There are multiple factors that are responsible for that. I think one of the biggest ones is that trainers and everyone involved are more aware of the current climate. We've had increased veterinary presence this summer. People just adapted to the new medication reforms. You have to credit the track maintenance personnel for continuing to evolve–Leif Dickinson and Dennis Moore [track superintendents] for providing the safest surfaces possible.

People are focused on safety, all the way down from the trainers, outriders, exercise riders, jockeys, it's a collective effort to make these things work. We met for hours and hours and hours, days and days and days before the meet, like Del Mar always does. Obviously, we'd like to get to zero, but the reality is it's been a safe meet and we're happy with that.

TDN: Will you continue to tweak things on the safety front?

DJ: Once the meet ends, we're going to review everything, what worked, what worked better than something else. We're going to continue to look at moving forward. Let's start with Dennis Moore and Leif Dickinson, they're constantly researching any ways to make the track conditions safer. We'll see how the Santa Anita meet goes. There could be new policies they make, and we're going to be open-minded and continue to be progressive.

TDN: Stepping back for a bird's-eye look at the meet as a whole, what's your broad impression?

DJ: I think our goal was to establish normalcy in Southern California, maintain a five-day-a-week program. We feel that was important. Many in the industry rely on Del Mar to race five days a week. In order to accomplish that, we carded fewer races. But that was our goal–instill confidence that races in the book would fill. Owners, trainers rely on a condition book that's going to go. And we did everything we could to accomplish that. I like to call it a revival–we want to be part of a revival of Southern California racing, continue to move forward, and go into this new era with a positive attitude. Be progressive.

TDN: Field size dipped slightly to around eight. How difficult has it been to navigate the waters of a shortened horse inventory?

DJ: In terms of field size, most important thing is giving the horse players the best product possible. We knew last year's numbers would be hard to match. Our field size was 8.7. That's what we call the Del Mar standard–it's what we strive for. We knew under the conditions we were facing going into the meet, that would be difficult to maintain.

We're going to end up at [at a field size of] eight, which is still a decent number. It's actually comparable to Saratoga, given that we've been going five days a week. It's not at the Del Mar standard, but it's still, given the climate and what not, it's a number we're hoping, moving forward, which we can move on. But there are positives moving forward.

Our Ship & Win recruitment program increased from a year ago–that was a key component of the success of our meet. A strong presence from our Northern California horsemen was a key component–that's another 100 starters or so that we relied on. Another positive for California racing was that 100% of the races stayed on the turf. That's another advantage we have–an owner, trainer can rely on our grass races going. So, those are the positives that we take on the meet.

TDN: Are we talking more turf racing in the future?

DJ: I think that's the way things are going generally–more categories being offered on the turf that five, ten years ago weren't offered. We actually ran the same number of turf races as we did a year ago, but with 21 fewer races [in total], so, that just shows you the importance of turf. Our summer meet follows Los Alamitos, so obviously people are looking for turf races before Santa Anita.

Again, we're going to review everything like we do at Del Mar, analyze every race. Everything will be reviewed, see if we can change some things up, continue to make improvements.

TDN: Before the start of the meet, you'd mentioned how some horsemen from back East were confused and concerned about some of the changes implemented in California. Are those concerns lessening?

DJ: Perception becomes reality, right? Before our meet, that was the whole firestorm of what was going on. They were hearing snippets of news coming out of California and it wasn't positive. So that was a challenge. But I'm encouraged by the amount of shippers that we saw for the meet for stakes races. [GI] Pacific Classic day, we had about eight shippers come in, and we've continued to have shippers coming in, which is encouraging for the summer.

The fall meet, where it's located in the calendar, there aren't as many turf opportunities, and we do attract quite a few horses to the [GI] Matriarch [S.], the [GI] Hollywood Derby, races like that. The summer can be challenging because there's so many options back East in that time frame.

TDN: Were you aggressively reaching out to out-of-state trainers throughout the meet?

DJ: Definitely. I've always learned that you just need to get your information out, and people are going to make their decisions accordingly. But make people aware of what you're offering. We're aggressive in that approach. Every year we do our recruiting in the spring. When we hosted the Breeders' Cup, many people came to Del Mar for the first time, and you just continue those relationships. Make the experience as positive as possible, which I think Del Mar does well.

TDN: Handle was understandably down–how worrying are the numbers when put into context?

DJ: I haven't really analyzed the handle numbers to be honest. Handle's definitely down. It picked up the last couple of weeks, since Pacific Classic week. We knew when we had a reduced number of races, field size wasn't as robust as it's been, and there would be a financial hit. What we're seeing is, especially in our out-of-state numbers, the last few weeks of the meet we seem to be recuperating. It looks like people took a wait-and-see approach with our signal a little bit, especially with what had been going on with California racing, so, as the product got better at the end of the meet, we started to see our numbers go back to normal.

The approach before the meet was: we're going to communicate with trainers, be as prepared as possible. For me, I breathed a sigh of relief when the horsemen who sent strings elsewhere returned. To me, that was vital. And, we put a lot of effort into communicating with owners, trainers, doing our best to instill confidence in Del Mar and California racing.

TDN: Backstretch workers routinely counter-protested the anti-racing protestors. Do you think this was an effective strategy?

DJ: Let's be honest, this industry in California impacts a lot of people's lives. There are hundreds of thousands of jobs here, and I think we felt we wanted to get the word out about how well horses are treated, pampered and treated like royalty. We know they are but perhaps the general public doesn't. They read what the media says, which is to focus on the negative. I think that message has been delivered. I think people are passionate about the game, and they wanted to get the word out.

TDN: What are your thoughts about the fall meet?

DJ: Preparations have already started for the fall meet this year, with Santa Anita hosting the Breeders' Cup, that leaves me more overnight races available because there's two days of Santa Anita, but they're Breeders' Cup races, so they're not using [the] existing population. It helps the start of our meet.

The fall meet really is determined if we get lucky in terms of weather. We have a high demand in terms of turf racing. We get a lot of interest from all over for our turf festival. There are certain categories that I saw a significant decline from a year ago. For example, maiden claiming races. Overall claiming races. I'm just going to have to figure out where we're at with that population moving forward for the fall. But I think we're going to see a little bit of an uptick in our 2-year-old program.