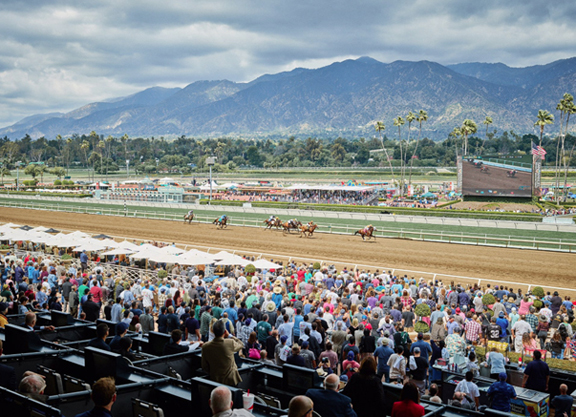 After three years of negotiated stability in the Southern California race dates calendar, significant changes are on the horizon for 2020.

Not all parties are happy with the proposed schedule, which has an emphasis on fewer racing dates and was only partially approved on Thursday by the California Horse Racing Board (CHRB) at its monthly meeting.

Santa Anita Park's 2020 winter/spring meet will still occupy roughly the same block of December-June dates. But the CHRB voted unanimously on Thursday to allow the track to carve out a three-week (12 racing programs) “flex dates” break of no racing if track management encounters severe or potentially horse-harmful weather like it did this year.

At the Del Mar Thoroughbred Club, the 2020 summer meet will still mirror its traditional July-September season. But once that meet is finished, a major switch is that instead of the SoCal circuit going to Los Alamitos–which in 2015 took over the Los Angeles County Fair dates that for decades had been run at now-defunct Fairplex Park–the CHRB approved a plan that calls for racing instead to move directly to Santa Anita, then pick up at Del Mar Oct. 28-Dec. 1.

In theory, no Los Alamitos in September means a reduction in the amount of opportunities lesser-caliber horses have to compete on the SoCal circuit. But the tradeoff, as framed by proponents of the newly revised calendar, is that the flexibility that allows for fewer racing dates overall will be a plus for the California racing industry in light of safety and horse population concerns.

The higher-profile tracks–Santa Anita and Del Mar–both got the date plans they jointly proposed in conjunction with the Thoroughbred Owners of California (TOC).

But officials from both Los Alamitos Race Course and the California Thoroughbred Trainers (CTT) claimed they were left out of some stages of the planning process that involved private meetings among those other stakeholders.

They also expressed dismay and frustration that they only found out about the proposed 2020 schedule when it was posted online by the CHRB about 48 hours prior to Thursday's meeting.

As a result, the CHRB split its Thursday vote, acting only upon the Santa Anita and Del Mar portions of the SoCal calendar. Voting on the remaining four weeks that had been allocated in that proposal to Los Alamitos (June 24 to July 7 and Dec. 2-15) was moved to the agenda for the September CHRB meeting.

It was not immediately clear in the aftermath of Thursday's vote what might change over the course of the next month to give Los Alamitos a schedule that more closely resembles its 2019 dates allocation, which is what track officials told the CHRB that they wanted.

CHRB spokesperson Mike Marten explained to TDN via phone after the meeting that it is his belief that the board has “no plans to revisit” the vanished Los Alamitos block of September dates that the board awarded to Santa Anita.

“We do have a specific concern about racing three additional weeks at Santa Anita immediately upon the close of Del Mar,” said Alan Balch, executive director of the CTT. “We're talking about changing the calendar and [losing] the opportunity for a different level of horses [to race]. That's serious.”

Jack Liebau, vice president of Los Alamitos, pointed out that his track's traditional September meet also has value to the state's industry because it pulls in horses from tracks like Turf Paradise and Emerald Downs that often remain to compete at the larger tracks on the California circuit.

CHRB Vice Chair Madeline Auerbach said that when the 2020 proposal with fewer racing dates was first floated at a dates committee meeting earlier this month, the logic of a less-is-more approach appealed to her.

“What we talked about was the fact that we would have less racing days at Santa Anita, and the reason that nobody put in a specific time [for the mid-meet break] is because we're trying to be sensitive to the weather situation [as it relates to] the safety of the horses and the riders,” Auerbach said. “We put in what we like to call “flex dates,” so that they would be racing less days, more amenable to taking days off in between to satisfy not only weather conditions, but conditions around the horse population.

“We were very cognizant of the need for the industry to recognize that we have fewer horses available,” Auerbach continued. “We all have come through a very difficult period…. Rather than [leaving it up to the CHRB to mandate safety-related closures] we have given Santa Anita the ability to do it themselves. And if they can't do it or won't do it, we can.”

Greg Avioli, president and chief executive officer the TOC, explained why his organization supported the 2020 concept.

“The thing that we like the most about this calendar is it's less racing,” Avioli said. “The reality is we continue to be down significantly in the horse population from previous years. We do not believe it's in the best interest of the sport, the horsemen, or the horses to continue to race every week of the year, so the calendar [that was proposed by Santa Anita, Del Mar, and the TOC] has three weeks less of racing for Santa Anita in their winter/spring meet and also has Del Mar starting effectively two weeks later.”

Del Mar president Josh Rubinstein said “from Del Mar's perspective, the calendar that we're requesting is based on breaks. We're requesting a 13-day break prior to our summer meet, and we believe that's the only way we'll be able to run five days a week and pay out what we're estimating to be $500,000 a day in purses.”

Aidan Butler, acting executive director of California racing operations for The Stronach Group, which owns Santa Anita, said, “This is a safe calendar. As safe as we can [have it be] at the moment. Horse racing has been through a terrible time. We need to run less. Change is tough. People get frustrated. But the most important thing now is the health, the safety, and the welfare of the horse and rider.”