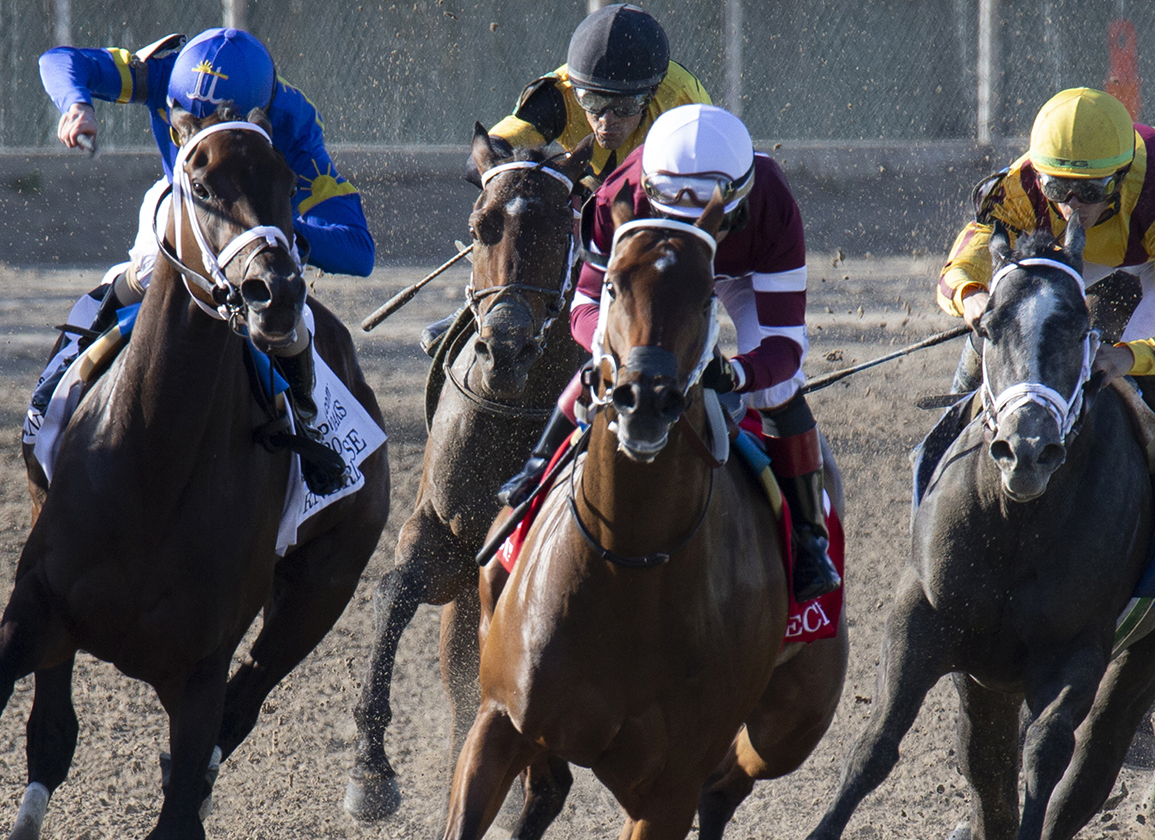 The big story last week was the return of Eclipse Award winner Echo Zulu (Gun Runner) in the GII Twinspires.com Fair Grounds Oaks, which she won by a nose over Hidden Connection (Connect) to stay unbeaten in five career starts. There will be plenty going on Saturday, with Secret Oath (Arrogate) stepping outside of her division to take on males in the GI Arkansas Derby and Kathleen O. (Upstart) looking to stay hot in the GII Gulfstream Park Oaks. A GI Kentucky Oaks contender could also come out of the $250,000 Bourbonette Oaks at Turfway.

This could be the last week that Secret Oath is included in our Oaks rankings as there's a strong chance that after Saturday she will be off the Oaks trail and instead on her way to the GI Kentucky Derby. How she performs in the Arkansas Derby will likely decide just that. Should she beat the boys Saturday, it's hard to imagine that trainer Wayne Lukas and owners Rob and Stacy Mitchell won't take what would be the next logical step and go in the Derby.

The Secret Oath team has found the perfect spot to test their star filly against males. She's the 5-2 morning line favorite in a $1.25-million race and will likely go off lower than that versus what is not a particularly strong group of male rivals. She is the only horse in the race to run a Beyer number in the 90s, something she has done twice. They have nothing to lose by trying this. Should she win, she would likely be on track for the Derby. If she falls short, they can go back to Plan A and run in the Oaks. A fascinating story. Will be fun to see how this plays out Saturday.

What should we make of her narrow win Saturday in the Fair Grounds Oaks? It's not an easy question to answer. On the one hand, it was her first start after a lengthy layoff and trainer Steve Asmussen had been saying all along that he hadn't really cranked his filly up just yet. She also showed some grit and determination to prevail over a quality rival in Hidden Connection. All signs point to her running better in the Oaks. Then again…weren't you expecting more?

She is a champion and a GI Breeders' Cup Juvenile Fillies winner and some thought she might be better than the best of the boys. It wasn't unreasonable to expect that she would thrash her rivals, win by six or seven while crossing the wire with her ears pricked. It's also worth noting that she got an 88 Beyer, making this the slowest race of her career. Is the 5-2 favorite in the Oaks Future Wager. Not all great 2-year-olds turn into great 3-year-olds. The jury is out.

Unraced since romping by 13 lengths in the GIII Las Virgenes S. on Feb. 6 at Santa Anita, she has been transferred to the barn of former Bob Baffert assistant Tim Yakteen. Owner Michael Lund Petersen was forced to make the move because it looks like Baffert will not be eligible to start any horses in the Oaks due to his problems stemming from the betamethasone positive from last year's Derby.

Because Baffert-trained horses were not eligible to earn Kentucky Oaks points, Adare Manor doesn't have any yet. But that shouldn't be a problem. She will be the heavy favorite next week in the GII Santa Anita Oaks and a win or even a second-place finish there should get her to the Kentucky Oaks. A daughter of Uncle Mo, she took a little while to get good, but started to put things together when winning a Jan. 7 maiden at Santa Anita by 12 lengths. With two straight Beyer numbers of 94, she has the top figures so far among any of the fillies eyeing the Kentucky Oaks.

She's 3-for-3 and has been visually impressive in each of her starts. She passed a big test last out when beating graded company for the first time in the GII Davona Dale S., which she won by two lengths. She takes her time to get going in her races, but when she does she launches a kick that is something to see.

She'll stretch out from a one-turn mile to a two-turn mile-and-sixteenth Saturday in the GII Gulfstream Park Oaks, but that doesn't figure to be a problem. If anything, the two turns and the longer distance should result in an improved effort. On the Beyer scale, she's improving. Went from a 67 in debut to a 78 in the Cash Run S. to an 85 in the Davona Dale. She'll need to up her numbers to win the Kentucky Oaks, but no reason why an improving filly in the hands of Hall of Fame trainer Shug McGaughey can't do just that.

Trained by Todd Pletcher, Nest is the winner of last year's GII Demoiselle S. at Aqueduct, which has emerged as a key race. Nest came back to win the Suncoast S. at Tampa Bay Downs and runner-up Venti Valentine (Firing Line) won the Busher S. at Aqueduct. Magic Circle (Kantharos) also emerged from that race to win a stakes and Nostalgic (Medaglia d'Oro) recently romped in an allowance race at Gulfstream. Nest won the Demoiselle by just a neck, but obviously beat some good horses. Didn't prove much when beating inferior rivals as the 3-10 favorite in the last, but did what was required of her.

Goes next in the GI Ashland S. at Keeneland, which will be a much tougher test. This is a good one. Very much a contender to win the Kentucky Oaks.

Wesley Ward certainly knows what he is doing and he is confident that this very fast daughter of Runhappy can stretch her speed around two turns.

“We're going to take it one race at a time and see how she runs in the Ashland before deciding on the Kentucky Oaks,” Ward said. “She had an awesome work over the Keeneland main track (six furlongs in 1:12) the other day. [Exercise rider] Julio Garcia was beaming after the work. He was going crazy when he got off her.”

The Ashland will be a huge test. Even though Happy Soul has won her last three starts by a combined 26 1/4 lengths, she's never gone beyond six furlongs. Has a ton of ability. The distance is the only question, and it's a big one.

She dropped off the list after finishing fourth in the GII Rachel Alexandra S. in her 3-year-old debut. After losing by just a nose to champion Echo Zulu in the Fair Grounds Oaks, she is back. Showed a new dimension in the Fair Grounds Oaks, closing from fourth after taking the early lead in her prior start. But…was she that good or did Echo Zulu put in a sub-par performance?

Showed a lot of promise last year when winning the GIII Pocahontas S. by 9 1/4 lengths, but didn't back that up when a distant fourth in the Breeders' Cup Juvenile Fillies. Probably not quite as talented as the top three or four on this list, but is a solid filly, a graded stakes winner and is in the capable hands of trainer Bret Calhoun.

Will look to give up-and-coming trainer Jorge Abreu his first graded stakes win. A native of the Dominican Republic, Abreu has been training only since 2016 and had his best year ever when his stable earned over $2 million in 2021. Abreu has served as the assistant to John Terranova, Nick Zito and Chad Brown.

This New York-bred filly won a pair of state-bred races last year before losing by just a neck to Nest in the Demoiselle. She followed that up with a blowout seven-length win in the Busher S., which was a tougher spot than one would ordinarily expect from a non-graded race. In most any other year would be a top three or four contender for the Kentucky Oaks, but not among this loaded group.

Arrived in the Pletcher barn after winning the GIII UAE Oaks on Feb. 18 for trainer Fawzi Nass and owner KHK Racing. Is 4-for-4 in her career, with all her races coming in Dubai. Half-sister to champion Lookin At Lucky (Smart Strike) sold for $425,000 last year as a 2-year-old at OBS April. Really hard to get a read on her. Cost a lot and obviously has some talent, but there's no telling how the competition she faced in Dubai stacks up to what she'll meet in the Kentucky Oaks. Is going to have to be very good to beat the kind of field she is set to face at Churchill Downs.

The third of three Pletcher-trained fillies to make the list. Bought for $550,000 at the Fasig-Tipton Midlantic 2-year-old sale, the filly showed something when second to the highly regarded Kathleen O. In the Davona Dale. Another New York-bred, she has never run beyond a mile or around two turns, so the Gazelle at nine furlongs, should be a good test for her. Appears to be on the improve, but needs to show more to win the Kentucky Oaks.