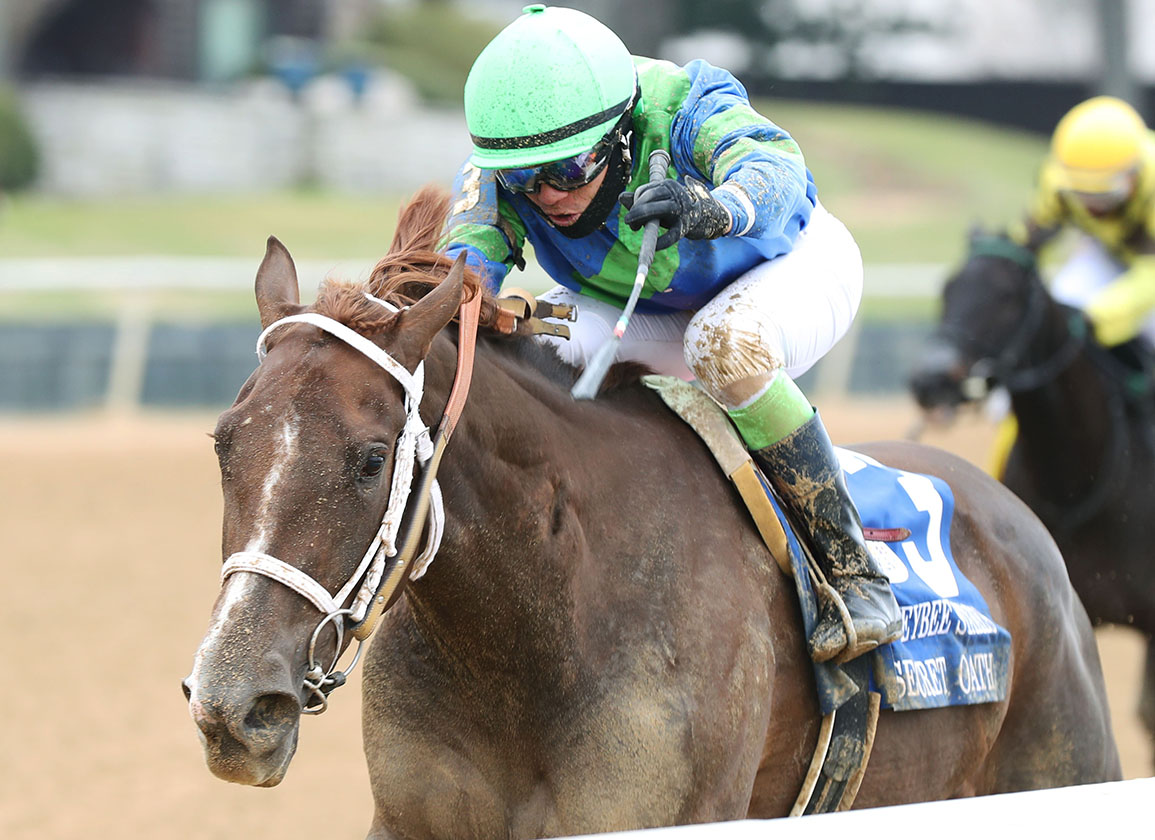 Though Secret Oath (Arrogate) will meet males Saturday in the GI Arkansas Derby, Hall of Fame trainer Wayne Lukas has been saying all along that the main goal for her remains the GI Kentucky Oaks. That's starting to change.

“First of all, we have to assume she is going to run a top race in the Arkansas Derby,” Lukas said. “(Owner-breeder) Rob Mitchell and I were talking three weeks ago and he said he wanted to go in the Oaks. Since then, he's brought up the Derby two or three times. I think it's a 50-50 proposition. That Derby Fever runs deep. I'll do whatever they want.”

Lukas understands that there is nothing like running a horse in the Kentucky Derby, especially a top contender. Even a race as prestigious as the Kentucky Oaks doesn't compare.

“I've been there and done that,” he said. “I've had all the thrills. I've sang 'My Old Kentucky Home.' I've had the experience a number of times. I want to give the Mitchells that experience. I want them to do whatever they want to do. If they say we want to run in the Derby that's what we will do. Whatever way they lean, I will endorse it 100% and try to make it work.”

Lukas and Mitchell, who owns Secret Oath along with his wife Stacy, have laid the groundwork for a possible Derby start. Had they opted instead to run against 3-year-old fillies the same day in the GIII Fantasy S., they would not have been able to accrue any points for the Derby. After Secret Oath romped in the GIII Honeybee S., winning her third straight, the decision was made to test the water in the Arkansas Derby. On paper, it looks like a smart move. The males lining up for the race are not a particularly strong group and Secret Oath has been made the 5-2 morning-line favorite. Secret Oath is the only horse in the race to have run a Beyer figure in the nineties.

“There was a lot of discussion that went into this,” Lukas said. “The Fantasy, believe it or not, is a Grade III. Rob and Stacy Mitchell thought that if we were going to go for a Grade I, maybe this was the spot to try it. They think we are competitive with the colts, which we probably are. Secondly, it's $1.25 million for the Arkansas Derby versus $600,000 for the Fantasy. I let them make the decision. I told them their filly was in top shape right now and I had led them over there against the colts before and I would do it again with great confidence. But the Grade III versus the Grade I was the main thing that pushed us in that direction.”

More so than any other trainer in the sport, Lukas knows what buttons to push when it comes to running fillies against colts. He won the Kentucky Derby in 1988 with the filly Winning Colors, one of only three fillies to win the race, and he won the 1984 Arkansas Derby with the filly Althea. She came back to run 19th in the Derby. He's won Grade I stakes races against males with Lady's Secret and Serena's Song.

“We are so tradition bound in Thoroughbred racing,” he said. “Nobody changes anything. I came along in the seventies and we made some changes and we were criticized for it. Even for the white bridles. Tradition is real strong, even with the younger guys. But, with a filly, if you have the fastest horse, you're in the right situation, the horse is doing the best they can possibly be doing and you can analyze the field and say, 'look, we are as good as they are,' I have no problem leading them over there. The Kentucky Derby is a career-making race.”

Appearing on the TDN Writers' Room podcast, jockey Gary Stevens, who rode Winning Colors, said that Secret Oath might be better than the Hall of Fame filly. Lukas isn't ready to go there yet, but he has a ton of confidence in Secret Oath.

“She breaks their heart when she runs by horses,” he said. “She'll clock them for a little while, and then when Luis Contreras let's her go, she has an acceleration that is really special. Winning Colors has done a lot more. But she could be that type. I don't know if I'd rate her as high as Winning Colors just yet. But when we get a little further down the base paths, she could turn out to be that good.”

Throughout his career, Lukas has been the eternal optimist. But even he probably never thought he might get back to the Derby at age 86. He has not won the race since 1999 with Charismatic, and his last Derby starter was Bravazo (Awesome Again) in 2018.

“My wife tells me every day, boy, with the way that filly has been running, it has really picked your head up,” Lukas said. “I have a passion for the main event. I want to compete in them. At 86, I have a few things going for me. We have a really good filly and we have a pretty good colt too in Ethereal Road (Quality Road). I have an experience edge on these guys big time. There's no how-to book when it comes to winning the race. I have already having done it and that gives you an edge. I am enjoying it immensely.”

During a prolonged period where negative racing stories have dominated the headlines, the story of an 86-year-old icon winning the Kentucky Derby with a filly could help heal a lot of wounds. Can it happen? It looks like Wayne Lukas is willing to give it every chance.