Richard Duchossois Passes Away at 100 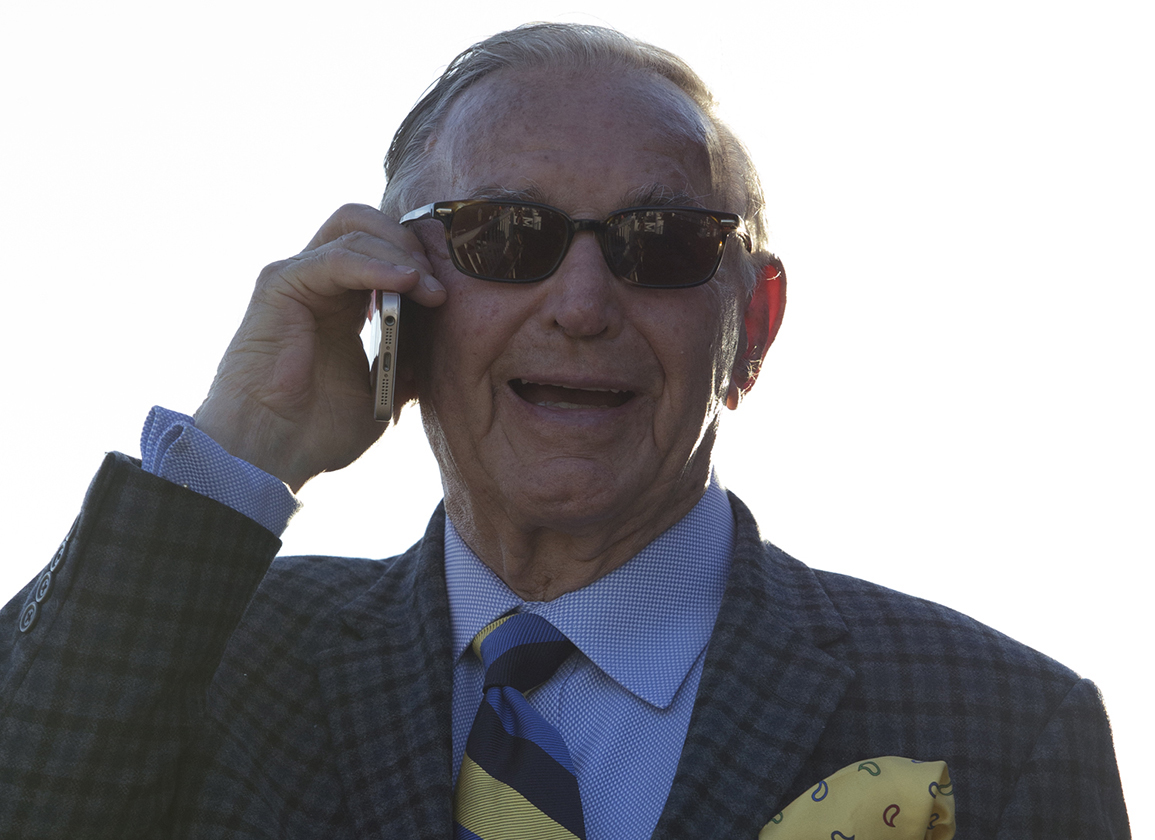 Richard Duchossois, the businessman whose name was synonymous with Arlington Park, a track he bought in 1983, has passed away. He was 100.

Duchossois was born in 1921 in Chicago and was a graduate of Washington and Lee University. He joined the Army in 1942 and became the commander of Company C of the 610th Tank Destroyer Battalion, which landed on Utah Beach in Normandy. He served in five European campaigns and later served as the military governor for the region of Eichstatt. He was released from active service in 1946 and was awarded the Purple Heart and two bronze stars.

After the war, he became the CEO and president of the Thrall Manufacturing Company, a company founded in 1916 that specialized in repairing and leasing rail cars. In 1978, the company diversified by buying The Chamberlain Group, a maker of consumer goods and defense products. In 1983, Duchossois bought out the Thrall family and renamed the company Duchossois Industries, Inc. The business would later diversify and operate as both an investment company and a company that makes access control systems such as garage door openers.

Duchossois started in the racing business as an owner and a breeder and operated out of Hill 'N' Dale Farm in Barrington, Illinois, which developed into one of the top breeders in the state. Over the years, he campaigned a number of stakes horses, including Eclair de Lune (GER) (Marchand de Sable), who won the 2011 running of the GI Beverly D. S., a race he named after his late wife.

In 1983, Duchossois Industries bought Arlington Park, then the flagship track among the Chicago racing circuit, from Gulf & Western. On July 31, 1985 Duchossois was returning from a birthday celebration when he received a phone call that Arlington was on fire. He arrived at the track by helicopter to watch as all five levels of the grandstand were engulfed in flames. The track was destroyed. Read more here.

In less than a month, Arlington was scheduled to run the GI Arlington Million, the sport's first $1-million race. Undeterred, Duchossois vowed to hold the race.

“Some people said it would be impossible, but I said, 'I'm the owner, and we're going to run the Million race. Period,'” he told the Chicago Tribune in 2015.

Arlington employees worked around the clock to erect tents and makeshift stands and the race, dubbed the “Miracle Million,” was held with more than 35,000 people in attendance. Recognizing the efforts it took to be able to hold the Million, the Arlington team was honored with a special Eclipse Award.

It took four years for Arlington to be rebuilt and Duchossois was not content to build just another racetrack. Renaming the track Arlington International Race Course, Duchossois set out to create one of the most beautiful tracks in the world, putting an estimated $175 million into the rebuild.

“I've always worked to please our customers,” Duchossois told the Associated Press in 2021. “There's nothing we have done there that hasn't been built for the customers.”

Arlington enjoyed another moment in the spotlight when Cigar was lured to the track in 1996 in an attempt to tie Citation's record of 16 straight wins. Cigar won the $1,050,000 race, called the Citation Challenge, before a crowd of 34,223. In 2002, Arlington hosted the Breeders' Cup.

In 2000, Duchossois negotiated a $72-million stock deal which allowed Churchill Downs to take over Arlington Park. The transaction made Duchossois, at the time, the largest shareholder in the Churchill Company.

“We believe that Churchill Downs' business strategy and its commitment to excellence are aligned with our own operating philosophy,” Duchossois said at the time. “We have the shared vision of dedication to customer service and a commitment to the live racing experience and the growth of simulcast sales.”

While Duchossois remained the face of Arlington Park for several years after it was purchased by Churchill, Churchill's focus soon started to drift from racing to gaming. In 2019, Churchill announced that it would not apply for a license to open a casino at Arlington and would, instead, close the track after the end of the 2021 season. It is believed that Churchill did not want an Arlington casino to compete with a casino it owns in nearby Des Plaines, Illinois.  What will likely be the last ever race run at Arlington was held Sept. 25, 2021. Arlington first raced in 1927.

Under Churchill, the Arlington Million underwent a name change in 2021 to the Mister D. Stakes, in honor of Duchossois. The purse was reduced to $600,000.

Somewhat surprisingly, Duchossois was publicly supportive of Churchill's decision to close and sell the track.

“I think Churchill has two of the finest managers in the country,” he told the AP.

Duchossois earned many honors in racing, including the American Jockey Club's Gold Medal and the Joe Palmer Award for Meritorious Service to Racing from the National Turf Writers Association. He was inducted into the Chicagoland Sports Hall of Fame and was also inducted into the National Museum of Racing and Hall of Fame and named one of their Pillars of the Turf in 2019.

“We are profoundly saddened today by the loss of Richard Duchossois. He was a tireless champion of Churchill Downs and thoroughbred racing. His impact on those of us involved in this industry was simply immeasurable. He was a mentor and friend to so many in Churchill Downs, most especially me, and we will all miss his grace, wisdom and humor. His contributions to Churchill Downs and thoroughbred racing were merely a small part of his extraordinary life. They call his generation 'America's Greatest' and to be fortunate to spend time with this man was to be in the presence of a truly special individual who led a full life of sacrifice, commitment and service to others. We will mourn him, miss him and wonder if there could ever be another like Richard Duchossois.” -Churchill Downs Incorporated CEO Bill Carstanjen

“On behalf of Illinois Thoroughbred owners and trainers, we extend our deepest condolences to the family and friends of Dick Duchossois.

“Mr. D served our nation with distinction and thereafter brought his enduring tenacity and exceptional work ethic to the helm of Arlington Park–a track he worked to build into a world-class destination for Thoroughbred horse racing.

“As we mourn his loss, we are reminded of his immense contributions to Thoroughbred racing in North America, most especially here in Illinois. His imprint on the sport and industry was vast and will not be forgotten.” -Illinois Thoroughbred Horsemen's Association

“Richard L. Duchossois was a great American who served his country valiantly during World War II, and later served the Thoroughbred industry with great honor and distinction. Very few individuals exhibited the drive and determination of Mr. Duchossois in his very full and successful life. Following a devastating fire that destroyed the Arlington Park grandstand in 1985, he conducted the Arlington Million under tents, and it was dubbed as the 'Miracle Million.' He then rebuilt Arlington Park into one of the shining jewels of all racetracks. Mr. Duchossois propelled the Arlington Million into a top international showcase and paved the way for further interest in global competition among the world's top Thoroughbreds. It was our great pleasure to bring the 2002 Breeders' Cup to Arlington Park with Mr. Duchossois at the helm. We cherish his legacy and extend our deepest condolences to the Duchossois family.” -Breeders' Cup Ltd.