The Night and Day That Arlington Died 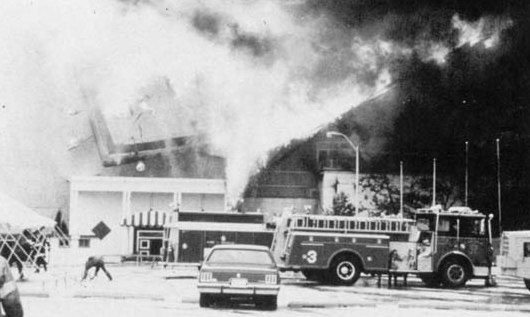 The Arlington grandstand burned to the ground July 31, 1985 | arlingtonpark.com

Wednesday, July 31, 1985, dawned a normal midsummer morning in Arlington Heights, Illinois, some 45 minutes from downtown Chicago. I was an 18-year-old high school graduate from nearby Wheeling High School, fresh from a homesick-shortened trip to Germany (I studied the language in school) and a handful of days from packing up my belongings to move into Bromley Hall for my first semester at the University of Illinois at Urbana-Champaign.

Later that morning, I had on WBBM-AM radio, when words to this effect were uttered:

“There is a fire at Arlington Park Racetrack.”

Two summers earlier, I'd watched Tolomeo (Ire) become the only 3-year-old take out the Arlington Million (upsetting John Henry in its third running) and now the track was on fire?

The early reports were that the fire was confined to a small area in the western part of the plant; it was even suggested that officials were hopeful that racing could go on as scheduled.

At one point, the fire, which reportedly began in horsemen's lounge adjacent to the lush Post and Paddock Club during the early-morning hours, was thought to have been under control. But unbeknownst to the firefighters, the flames found their way into numerous hidden spaces and false ceilings, ultimately giving the fire access to essentially the entire length of the grandstand.

From my home about eight miles north and east of Arlington, the smoke became thicker and increasingly black. The once-smallish blaze had morphed into an inferno. Hundreds of firefighters and first responders from nearly 20 communities in the north and northwest suburbs of Chicago tried to tame the fire. But, as is often the case, the fire won, and spent firefighters became little more than spectators, reduced to simply allowing the conflagration to burn itself out.

“We've done everything humanly possible to extinguish this fire–we weren't successful,” a sullen Arlington Heights Fire Chief Bruce Rodewald, who had been on the job for less than a year, told the Chicago CBS television affiliate, Channel 2.

I, too, became a spectator. I left my home to witness personally the devastation and watched the 'old lady' burn from the parking lot of the Arlington Park train station. And the track that had hosted the likes of Citation and Secretariat–and fewer than 12 months earlier John Henry for a third time–was nothing more than a twisted maze of melted I-beams and charred wood. No people or horses were injured in the blaze.

Click for video coverage of the fire from Chicago TV stations CBS Channel 2 and NBC Channel 5.

For decades, the name Richard L. Duchossois has been synonymous with Chicago Thoroughbred racing. A Chicago-area native, Duchossois, served in five European campaigns during World War II and was the recipient of several citations. He became a prominent businessman, founding the suburban Elmhurst-based Duchossois Group, which operates or owns stakes in a diversified group of businesses involving consumer products, entertainment and venture capital.

On Aug. 18, 1983, a little more than a week before the aforementioned Tolomeo won that year's Million, Duchossois, along with Joe Joyce, Sheldon Robbins and Ralph Ross combined forces to purchase Arlington Park from the Madison Square Garden Corporation. Less than two years later, their investment, had, quite literally, gone up in smoke.

“I had just returned home from a surprise party for a friend and I got a call from Joe Joyce, the president of the track,” Duchossois recollected. “He told me that there was a small fire in the Post and Paddock Club, but not to worry, that it was under control. A little while passed and I got another call saying that we were in good shape, but the next call I got went, 'Hey, you better get over here.' So, I got in the helicopter and did that.”

By his own admission “not a racetracker” and more an investor at the time, Duchossois realized fairly quickly that the situation was quickly deteriorating.

“Of course it was dark out at the time, and that fire lit up the entire night sky,” he explained. “My immediate thought was, 'Well, if the fire has gone this far, we're not saving the grandstand,' and my concern was how are we going to run the Million,” just over three weeks away.

For the next 21 days, for 20 hours a day (there was a four-hour break between 4 and 8 a.m. to allow the horses to train), crews worked feverishly to dismantle the burned-out track, to haul away the melted steel and the rest of the rubble. Bit by bit, progress was made, a veritable tent city was erected and Sunday, Aug. 25, 1985, the track–the one that couldn't possibly host another day of racing that year or maybe ever–staged the fourth running of the nation's first seven-figure horse race. At odds of 14-1, British raider Teleprompter (GB) and Tony Ives crossed the line first in what has gone down in history as the “Miracle Million.”

“I never gave it a second thought,” the eternally optimistic and driven Duchossois replied, when asked if he believed that staging the race could be accomplished. “If you think too much about things, they never get done.”

Committed to the breeding and racing industry in the state of Illinois, Duchossois bought out his partners and a new Arlington rose from the ashes a few years down the road.

Joe Joyce acceded to the throne at Arlington in 1977 before he turned 40 years of age, a meteoric rise from New York attorney to general counsel for NYC OTB to working for the Madison Square Garden Corporation en route to business superstardom.

“He went from nowhere to sitting at the big-boy table really fast, he went from nothing to something really quick,” explained Joyce's son Mike, part of the on-air talent at TVG. “He was just one of those people who accomplished everything he set out to do–nothing rattled him, nothing shook him.”

Such resolve was tested that Wednesday morning and afternoon.

“I remember getting the news at my sister's house,” said Mike Joyce, then just seven years old. “I remember my dad getting the call that there was a fire at Arlington. From the executive offices, when you walk through the grandstand, there was this room that time had sort of forgotten, something between a diner and cafeteria and an electrical fire started in there somewhere. One of the great ironies is that my father, in 45 years, he never left his briefcase at the office and that was the first time he'd ever forgotten it. God knows what was in there.”

As seen in the video from Channel 2 television, even as the track lay in smoldering ruins, Joyce remained remarkably poised and, not surprisingly, businesslike in his demeanor, ready to face what lie ahead.

“He was never a very negative guy and I really don't ever remember him being upset or distraught about it,” Mike Joyce remembered. “They almost laughed it off, like, 'OK, now we've got this in our way.' There was talk about the Million being run elsewhere, but they said, 'We can do it.' Everyone thought they were crazy– and they were–but they were able to pull it off.

Mike Joyce continued, “He always said competence is confidence. If he had it on his mind to do something, he'd do it. He was always very focused and determined, even from the time he was a kid. He just inspired confidence in people, so if he was like, 'We're going to do this,' then people said, 'OK, Joe thinks we can do it, so I guess we're going to do it.'”

Joyce, who along with former MSG President Sonny Werblin gave birth to the idea that would become the Arlington Million, and who along with Duchossois, Robbins and Ross received a special Eclipse Award for their efforts to stage the 'Miracle Million,' passed away at the age of 77 in late 2006.

For years, Chicago native Ernie Poulos conditioned horses on the local circuit and took over the training of Black Tie Affair (Ire) in 1989 before campaigning the popular gray to a victory in the 1991 GI Breeders' Cup Classic and Horse of the Year honors. Since his passing in 1997, his wife Dee has continued to operate the Ernie Poulos Racing Stable and she vividly remembers the day the track burned.

“It was really scary, because you think it's the end and you think racing is going to be over and that they're not going to rebuild,” she commented. “It was fortunate that the wind was blowing away from the barn area, because the embers were falling all around us. And we were in these wooden barns, so it was pretty scary.”

Mrs. Poulos, who also lived through fires at the old Washington Park and at Hawthorne, remembered how her late husband put himself in harm's way in an attempt to rescue valuable documents.

“[Ernie] had gone up there and actually it was him and [former racing official] Bill Thayer and they went into the racing office to save the papers because at that time there was no such thing as computers,” she explained. “The firemen were telling them to get out, that it was too dangerous, but they got in there and got the papers out.”

The near-term racing landscape on the Chicago circuit was altered dramatically, by definition, with the rest of the Arlington meet shifted to Hawthorne, bar the Million. But if the horses were unduly affected, they weren't showing it, Poulos said.

“It was a very strange thing to be out there training with that building smoldering,” she commented. “You'd think the horses might react to that, but they went on about their business.”

Like many other horsemen and women on the backstretch, Poulos and her husband were naturally heartened when the decision came to rebuild the track.

“We went from horror to euphoria,” she said. “I look back and it was an unbelievable feat for them to do that and for things to go back to a relatively normal life. Arlington was such an important part of our lives, so it was so good that it came back.”

The three decades since the fire have “flown by,” says the ageless Richard L. Duchossois, who in two weeks' time will preside over the 33rd renewal of the Arlington Million.

“It really does seem like yesterday,” he offered. “It's the fastest 30 years there's ever been.”