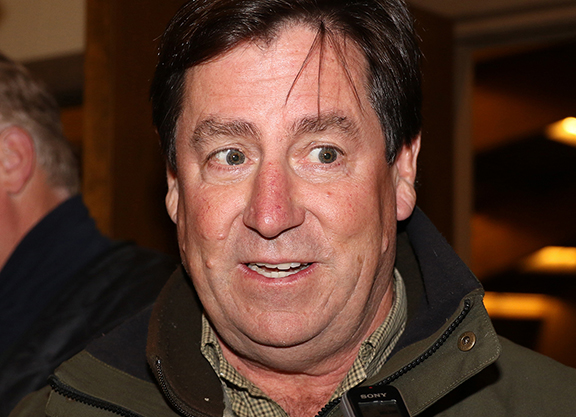 Dozens of angry industry members took to social media Monday morning after a racially charged social media post by a prominent Thoroughbred consignor surfaced on Twitter. By the end of the day, The Jockey Club, Keeneland, Fasig-Tipton, the Stronach Group and the NTRA had issued statements denouncing the posts.

Tom VanMeter, who owns and operates VanMeter Sales, a leading consignor based in Lexington, Kentucky, posted two comments in response to a question posted on Facebook by farm manager Donnie Snellings, asking people to repost his post if they planned to boycott the NFL season. Some fans pledged to boycott the NFL in 2016 after Colin Kaepernick first sat down, and then kneeled on the sidelines during the playing of the national anthem in protest of police brutality and racial inequality in the United States.

The question of the boycott was raised again when the NFL, after the nationwide protests and outrage in the wake of the killing of George Floyd, reversed its policy on allowing players to kneel before the game.

VanMeter's first reply contained an abbreviation of the “N-word,” when he referred to the NFL as the “n-word football league,” and he later posted, “Put em back in their cage!!!”

Official industry reaction was swift. The Jockey Club posted the following statement on their Twitter feed. “OwnerView, jointly owned by The Jockey Club and TOBA, has suspended the account privileges of Tom VanMeter pending further review, based upon offensive content posted on social media under the same name. There is no place in racing or our society for racially hateful language.”

OwnerView is an owner platform which helps promote racehorse ownership along with industry providers. VanMeter's profile has been taken down from the site.

Fasig-Tipton also denounced the comments in a statement.

“Fasig-Tipton does not generally comment on social media postings made by third parties, other than to make clear that this comment was not made by an employee or representative of Fasig-Tipton and does not reflect Fasig-Tipton's values,” the statement read. “We do not condone or support any statements or actions that do not promote a more diverse and inclusive environment for industry participants.”

“Keeneland condemns Tom VanMeter's post,” the sales and racing company said in an emailed statement. “There is no place for racism in our sport or our society and his words are antithetical to Keeneland's values of respect, community and equality. Our industry must deal honestly and directly with our lack of diversity and look hard at its underlying causes. It is not only the right thing to do, it is critical for the future of the sport we love.”

“At Keeneland, we have begun the process of reviewing our internal culture, structures and practices to try and build a better, more diverse and equitable Keeneland family. We do not believe there are easy answers to these complex and systemic challenges and everything is on the table as we move forward.”

The NTRA's Alex Waldrop Tweeted, “The racist remarks and views posted on social media on an account belonging to Tom VanMeter have no place in society, let alone the horse racing industry. The NTRA no longer will accept financial contributions of any kind from him or others who share his views.”

The Stronach Group, which also owns and operates Santa Anita, Gulfstream Park, the Maryland Jockey Club and Golden Gate Fields, Tweeted the following: “The Stronach Group and 1/ST are appalled by Tom VanMeter's comments. This type of hateful speech does not belong in any civilized society. It is repugnant, divisive and just plain wrong. It will not be tolerated at our tracks as it's contrary to our mission as we believe strongly in human equality. To be clear, we celebrate our diverse employees, horsemen, guests and community that together make our venues and the sport as a whole, truly special.”

People on social media called for others not to support his consignment. “If you buy a horse from Tom VanMeter in September, you are part of the problem. End of story,” Tweeted owner Robert Masiello.

Denali Stud, where Donnie Snellings serves as farm manager, issued a statement of their own on Twitter. “In light of recent events surrounding racist comments made by a third party on an employee's private social media account, it should be known that Denali doesn't condone these comments. They don't reflect our core values and there is no place for them in our industry or society at large.”

In a letter this morning, the TDN informed VanMeter that it would no longer accept advertising from him out of respect to its staff, readers and fellow advertisers.

A phone call to VanMeter's cell phone was not returned in time for publication of this story.