Owner Donoghue: 'Disgust' With Cheating Pushing Me to Race Overseas 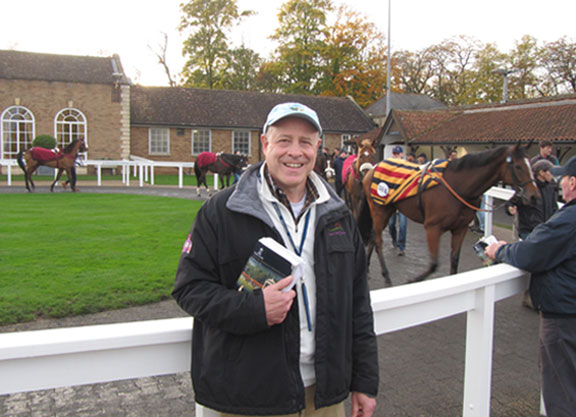 Last week on the TDN Writers' Room podcast presented by Keeneland, spurred by this Bill Finley column in which prominent owner Joe Sutton spoke out about trainer Joe Sharp and his twice-disqualified Blackberry Wine (Oxbow)–who continues to run in conditions he would be ineligible for if not for positive drug tests–I put out an open call. I wanted to hear from owners and trainers who have been adversely affected by cheating and drugging of horses in light of the bombshell allegations revealed by the FBI indictments that rocked the sport last month.

Surely, there are hundreds if not thousands of people who have been turned off at one point or another by the rampant use of performance-enhancing drugs in American racing and, owners in particular, have the leverage to affect change if they threaten en masse to leave or reduce their involvement in a game that is already hemorrhaging participants.

Enter Daniel Donoghue. Not a household name, to be sure. But he is a new owner who was steadily increasing his investment in American racing until he soured after being victimized by cheating rivals. Now, the American-born investment banker is sending his horses overseas and beginning to race in the vastly more strictly regulated European market instead.

“I am not a large, name-brand owner, but I campaign about four to six horses at a time,” he said in his original response to me. “I buy a couple each year at the Keeneland September Sale. As a result of my disgust with U.S. racing, I have been shifting my interests to England.”

Donoghue had enthusiasm for horse racing going back to when he was a kid in Illinois and would skip school to go watch the races at Arlington Park. After becoming successful in the field of finance as an adult, his first foray into ownership was as a partner with West Point Thoroughbreds in 2009. His first win came a year later, and then he was off and running, eventually starting his solo journey as Signal Hill Farms.

“After I kind of figured out how it all worked, I decided I wanted to do it on my own. I had the unfortunate circumstance of my first horse I ever bought on my own doing really well,” he joked. “It's like when you take somebody out golfing and they play really well their first time. It's a curse.”

“That's about as good as it gets for a guy like me,” he said. “Ever since then, I've been campaigning four, five, six horses at a time. I'm in it to watch my horses develop and become very competitive athletes and maybe win an allowance or stakes along the way.”

One year, Donoghue decided to try his hand at buying a horse from Newmarket's Tattersalls Horses-in-Training Sale with the notion that he could find a horse who would prefer the faster turf surfaces of America, and came back with Highly Prized (GB) (Manduro {Ger}) from a Juddmonte dispersal in 2015. He won his Stateside debut for Donoghue on New Year's Eve at Gulfstream, but eventually found stakes waters too tough and ran out of allowance conditions. Not wanting to lose him for a claiming tag, Donoghue and trainer Mike Stidham's English-born longtime assistant Hilary Pridham decided to send him back across the pond to become a jumper. Winning three of his first four European starts, Highly Prized opened Donoghue's eyes to the striking contrast of drug regulation and enforcement in England, just as he was starting to grow discouraged by the lax, patchwork system in place in America.

“It's very clear over there what the rules are,” he said. “I'm not naive enough to think there aren't unscrupulous people in England or it's some kind of panacea, but I do believe there's less chance as an owner that I'm going to be as disadvantaged as I am here in the U.S., where you work really hard to get your horses ready, take good care of them, you get to race maybe four, six, eight times a year and you occasionally get a good trip, and just when you think things might be working right, a cheater's horse re-breaks at the quarter pole, and it's just devastating. You're like, 'Why am I in this anymore?'”

Like many issues in American racing, Donoghue believes the underlying problem is a lack of centrality in its regulatory structure, and he says he's seen that in especially stark contradiction to the omnipresent British Horseracing Authority in England.

“I've come to appreciate the way they do things there broadly in terms of things like training, but more specifically in terms of the central governing body that is the BHA,” he said. “The clarity of their positions on performance-enhancing drugs that makes the U.S. pale in comparison. The reason I think cleaning up the game hasn't happened [here] is principally because we don't have that central body. We have a clown car of regulators where, depending on what state you're in, a different clown comes out of the car.”

Donoghue thinks that helps to give cheating trainers cover when their horses test positive. He also says that even when rules are clearly broken, punishments aren't nearly severe enough, lamenting specifically the way the Sharp issue was handled by Kentucky and Louisiana regulators. Sharp was fined just $1,000 for each of his eight positive tests for levamisole and was given no suspension.

“What applies in one state doesn't apply in another state, and a lot of trainers use that to hide behind,” he said. “'Oh, it was OK to do here, we didn't realize we were going to be running there.' And the other part of it is in these states, even when they have the ability to detect and the rule to enforce, they're just not enforced. The literature on levamisole has been very clear. I have a copy of the letter from the RMTC to all the trainers going back to February of 2017 where they said if you use this stuff, you could really jeopardize your livelihood in racing. Comparing it to England, there that's actually the case.”

Beyond the integrity of the sport being at stake, rooting out performance-enhancing drugs is at its core an animal welfare issue. One of the most staggering aspects of the recent doping scandal was how flippantly some of the defendants spoke about drugging and breaking down their horses. Donoghue says that factors into his decision not to run horses in America, particularly when it comes to claiming races.

“The problem with our system in this cheating world is, I don't want to run my horses in a place where they can end up in the hands of a trainer who abuses them through these kinds of methods,” he said. “So I don't want to run in those situations, and I'm better off in the UK, where at least I don't have to worry that my horse ends up in a bad place. The reverse is true too, like, 'I'm not claiming a horse off that trainer because it'll fall apart as soon as you get it,' so it has that kind of impact too as a secondary iteration.”

The racetrack isn't the only segment of the sport where drugging occurs and demands more strict regulation. Sales companies have started to ban the use of bisphosphonates in young horses, belatedly in Donoghue's mind, and there has been a recent push to get rid of clenbuterol use as well.

“The other issue is as an owner, you go to the sales, and now you're not talking about the cheating trainers, you're talking about the breeders and consignors whose horses have been on clenbuterol to try to gain from its steroidal properties,” Donoghue said. “Then there's the issue with bisphosphonates. In the UK, if you're found to have given your horse bisphosphonates before they're 42 months old, you're out of the game for life. All the things we're talking about with regulators when it comes to racetracks, we could say all the same things about the sales. There's a lack of real determination to root out corruption.”

Like me, Donoghue knows that there's a large number of other people in the industry who feel the way he does but haven't spoken out publicly. He is especially surprised that horsemen who are directly losing market share to juicers haven't been banging the drum to rid the sport of cheating.

“I can't get over the trainers who don't speak out against the trainers they know are cheating, because it's taking money out of their own pocket,” he said. “I don't understand it. I guess as owners we feel that we're never really regarded as having an opinion that matters, but it is interesting that I find my way to the UK and you see other people like [Team Valor International's] Barry Irwin pulling out of the U.S. and focusing on Europe. That's only two data points, but it's a big enough statistical pool of owners, that I can't be the only person who's to the point of saying I don't want to commit more capital to U.S. racing in its current state.”

As for the FBI's indictments, Donoghue had similar reactions to much of the racing world. Shock, not at the contents of them, but that consequences finally were coming to some of the sport's worst alleged dopers. Embarrassment, that law enforcement had to do the job of American racing's regulators. And skepticism, that things will actually change as a result.

“I was thrilled when I saw the indictments,” he said. “There was nothing surprising about the allegations. The only thing that was surprising was that it was investigated so seriously and thoroughly. And when I reviewed the list of people involved, I expected to see more name-brand people in there, but maybe that's another shoe to drop. Will it have ramifications? It does embolden regulators, but there's just no appetite of anyone I see in jurisdictions in this country to really root this stuff out. In this case, it really wasn't the industry, it was the FBI, and that says something right there. That there was enough to go find that the FBI went and found it, and industry regulators who know it's been going on forever couldn't bother to look at it.”

That skepticism is warranted, but it also speaks to the need for people like Donoghue and Sutton and Irwin to make their voices heard. Without internal public pressure from the people who have the most to lose from the allowance of cheating and drugging, it is exceedingly likely that American racing will fall back into conducting business as usual. And business as usual, as we all know right now, is an insufficient way forward.