Home » Archive » Op/Ed » Op/Ed: Clenbuterol–It Has To Be Stopped, And Now

Op/Ed: Clenbuterol–It Has To Be Stopped, And Now 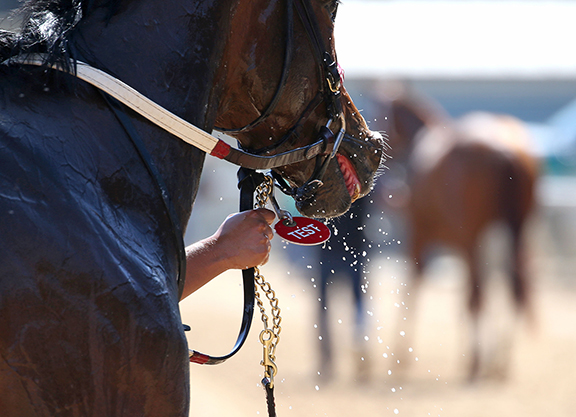 Clenbuterol is the most abused drug in our industry. For anyone who does not know what Clenbuterol is, please read this: a synthetic drug used in the treatment of asthma and respiratory diseases and also in veterinary obstetrics. It also promotes the growth of muscle and has been used illegally by athletes to enhance performance.

This drug is banned by every major sporting body in the world. The Olympic Committee banned it more than 20 years ago, yet it is alive and well in the Thoroughbred industry. The mind-boggling thing to me is that with all the trouble we have in our industry with breakdowns, nothing has ever been brought up about the use and impact of this drug.

When the drug first came out, it was used for respiratory issues, but of course a few smart men and women discovered that when it was given in higher dosages, sometimes 10 to 20 times the described amount, it has similar effects of an anabolic steroid.

There have been many studies done on Clenbuterol over the last 20 years. Findings include the following: increases muscle mass; improves endurance and stamina, boosts energy levels. And here are some of the side effects: bone loss (click for study), bone micro-architecture altered (click for study) and irregular heartbeat.

About a year ago I read a study showing that an intact horse has almost a three-times greater chance of a fatal breakdown than a gelding, filly or mare. I was surprised by how big a discrepancy there was, but not shocked. For years I have gelded colts, not because of their manners, but because of how massive they become as they get older. It has always been my belief that geldings stay sounder longer because a gelding does not carry the muscle mass of a colt.

I believe very strongly in something and here it is: it is a proven fact that Clenbuterol causes increased muscle mass and that in itself could cause more stress to our athletes, but when you add the fact that it causes bone loss, that doubles the risk to soundness. Is muscle mass/bone loss a recipe for disaster or what, I ask you?

Now a short lesson on how this drug is being used and abused, but still falling under the rules of racing.

First, let me point out that the rules and withdrawal times vary from state to state and Canada. That in and of itself is very frustrating and is why I signed on to be a supporter of the Integrity bill currently making its way through the Congress.

Here is how it works: a trainer will claim a horse, buy or receive a horse from another trainer and this new trainer will instantly put this new horse on a high dosage of Clenbuterol. After less than two weeks, this horse will start having more muscle mass, his lung capacity will increase, his stamina and endurance levels will also increase. This treatment will go on for another two to four weeks. Then comes the withdrawal time, which as I said previously, varies depending on where the horse is racing.

I am disappointed to say that a place that is very dear to me, Woodbine in Canada, has a withdrawal time of seven days, which I find to be totally unacceptable and leads to unimaginable form reversals on a weekly basis. I must say that it is not Woodbine's fault or the CEO Jim Lawson's, but more the governmental agencies that have not found it fit to change.

A claimed runner's new trainer runs his bigger, stronger horse, and guess what? It runs a Beyer number that is 10, 15 maybe 20 points higher than it did for the previous trainer. The other big surprise is that he or she has not broken any rules because he or she has met the withdrawal times.

Then right after the race, the horse will go back on Clenbuterol or the horse will start going into depression and melting away. There have been many thoughts and discussions why horses do not run as often as they used to, and you can see by the process being employed by the Clenbuterol trainers, a horse can only run every six weeks to two months. The problem with this system is the trainers and owners that do not want to subject their horses to this type of treatment compete at a huge disadvantage.

We have a similar issue with our horse sales, where Clenbuterol is being used to increase muscle mass in weanlings, yearlings and 2-year-olds. I commend the recent move by Fasig-Tipton, Keeneland and OBS in the last few months to ban the drug completely in juveniles being sold. I now am begging those same companies to ban it in any horse no matter the age. I cannot tell you how many times I have bought a yearling or a 2-year-old, brought them home, and watched them wilt away to nothing. It is very sad and disheartening.

Owners, if you are receiving extremely high vet bills each month, you are more than likely paying for Clenbuterol. Hint: it may not show up on your bill in that name, but I promise you, you are paying for it.

I urge all involved in Thoroughbred racing and sales to please unite and ban this drug before it is too late.