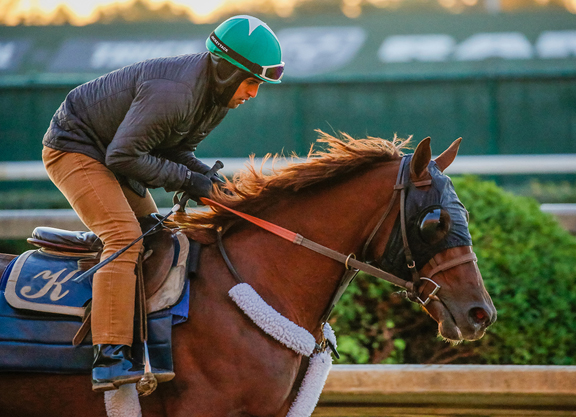 Like most owners, Joe Sutton asks only for a level playing field, which is why he is still trying to make sense of the fact that Blackberry Wine (Oxbow) will be allowed to run in Saturday's fourth race at Oaklawn against his colt Scabbard (More Than Ready).

Blackberry Wine has crossed the wire first on three occasions, but, so far as his official record goes, only one counts. He was disqualified from purse money in two of his starts after testing positive for the drug levamisole. Because of the demotions, he fits the conditions of the upcoming race, which is for horses who have never won two races. Coming off a 13-length win in a maiden race, from which he did not test positive for any illegal medications, Blackberry Wine will be among the favorites Saturday (Scabbard is the 5-2 morning-line choice).

“There are a couple of issues here,” Sutton said. “Number one, why is he allowed to compete in the race? It's supposed to be a race for 3-year-olds who have only won one time. He's won three times, even if two of them resulted in a disqualification because of using drugs. I was shocked to see that he was permitted to run in this race.”

Sutton continued: “Those races should have counted against his conditions, even if he was taken down. I guess that's not the rule.”

Trainer Joe Sharp and the owner, Calumet Farm, have been playing by the rules when deciding where to run the horse. Whenever a horse is disqualified from a victory for any reason, the races are not officially considered wins and therefore do not count when it come to conditions. Sutton said those rules need to be changed.

“I can't fix everything in horse racing, but in my opinion, there should be some standards for what happens when a horse tests positive,” he said. “Certainly, part of that standard should be you forfeit the condition.”

Sutton also questioned why Sharp was not handed down stricter penalties. He had eight horses test positive for levamisole during the Fair Grounds meet. He was not suspended by the Louisiana Racing Commission, and, instead, received a $1,000 fine for each infraction. Sharp also had three horses test positive for the drug at Churchill Downs. Kentucky officials have yet to announce any penalties against the trainer.

Sharp said the positives were the result of his using an over-the-counter deworming product, which he said, veterinarians told him complied with Kentucky and Louisiana racing rules.

“Why is the trainer with a horse who has tested positive at two different tracks allowed to run again at a different racetrack?” Sutton said. “Why isn't someone watching this? The trainer obviously has some problems.”

Blackberry Wine tested positive after crossing the wire first in a Nov. 30 maiden race at Churchill Downs. Two starts later, he again crossed the wire first, this time in a Jan. 18 allowance race at the Fair Grounds. After a seventh-place finish in the GII Risen Star S., he showed up in a Mar. 14 maiden race. A horse who already “won” an allowance race, he had no problem beating maidens, winning as the 3-5 favorite.

“There needs to be a new set of rules for horses who fail tests,” Sutton said. “Maybe they shouldn't be allowed to race for 60 days until the drugs get out of their systems. We have to use common sense. There has to be a better solution. This is not good for horse racing. There have been multiple problems with drugs with this trainer and it seems like horse racing doesn't care.”

Scabbard, who is trained by Eddie Kenneally, broke his maiden last June at Churchill Downs and then ran second in the GII Saratoga Special and in the GIII Iroquois S. In his most recent starts, he was  fifth in the GIII Lecomte S. Jan. 18 and sixth in the GII Risen Star S. Feb. 22.

Sutton, whose business ventures include an ownership interest in the Houston Texans, has owned Thoroughbreds for 25 years. He said he still enjoys the sport but has grown wary of competing against stables he says have an illegal edge.

“I think that's the case with all the honest owners,” he said when asked if he had become disillusioned with the sport. “I've been in the business for a long time and have owned some quality horses. I really enjoy it. But you can't continue to put horses out there who are good horses and continue to lose races because someone is cheating. You have to win races, not just for the purse money, but for the potential stud value or to increase a horse's values as a broodmare. It's a big thing when a horse loses a race they shouldn't lose. You're only racing a handful of times, as it is.”

Though he said he intended to stay involved with racing, Sutton also said he could see himself investing less in the sport.

“I'm not going to quit horse racing because of what is going on, but something like this makes you disinclined to keep spending money on horses when you don't think they are going to have a fair shake,” he said.