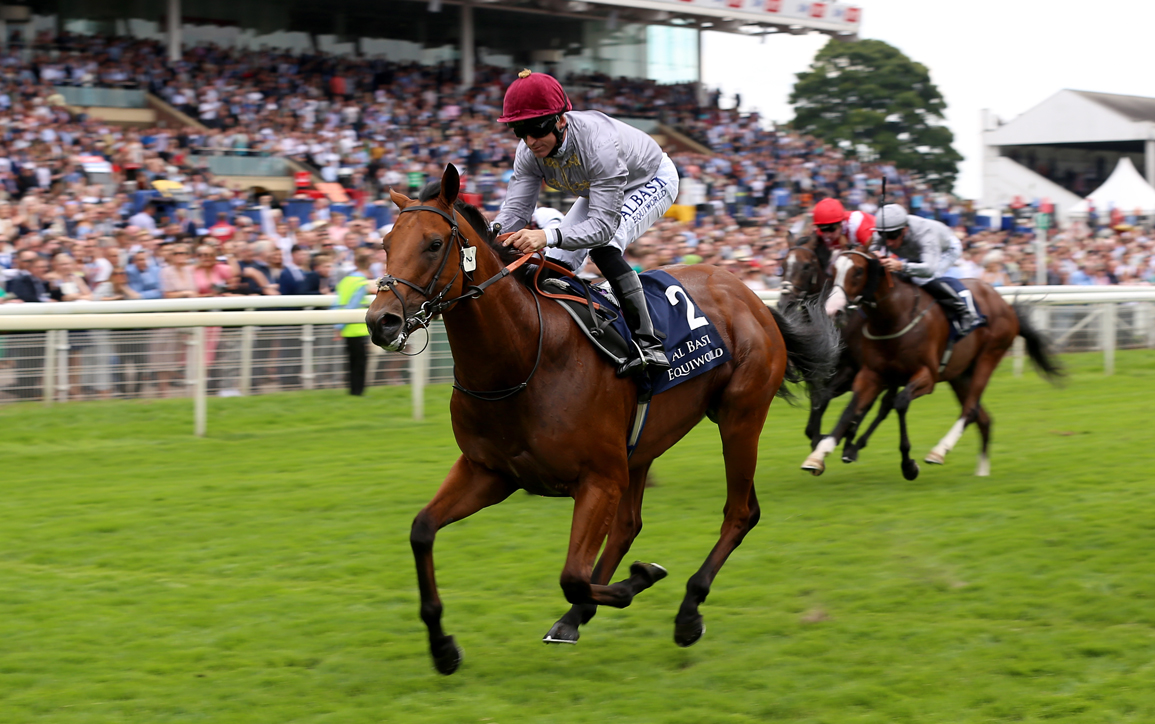 Defying a three-pound penalty for his success in the G2 July S., Lusail (Ire) (Mehmas {Ire}) continued Al Shaqab Racing's purple patch with the juveniles in Friday's G2 Al Basti Equiworld Dubai Gimcrack S. at York. Always perfectly placed behind the pace-setters by Pat Dobbs, the 7-2 second favourite stayed on past Gis a Sub (Ire) (Acclamation {GB}) just inside the final furlong en route to a 1 1/4-length success from that long-time leader, with Twilight Jet (Ire) (Twilight Son {GB}) 3/4 of a length behind in third. “He's very babyish and we haven't got to the bottom of him yet,” the winning rider said. “I got to the front about half a furlong earlier than I wanted. He's quick enough for six, but seven is not a problem for him either and he's so laid-back. He's a nicer type of a horse than Mehmas with a lot more scope. This guy has everything you need.”

Trading at 28-1 when springing a surprise on his debut over this course and distance May 13, Lusail ran into two smart opponents in Angel Bleu (Fr) (Dark Angel {Ire}) and Khunan (GB) (Twilight Son {GB}) when third behind the subsequent G2 Vintage S. winner and G2 Richmond S. runner-up over this trip on soft ground at Pontefract 15 days later. Making all over seven furlongs at Newmarket June 19, the bay returned to the latter venue to upstage Asymmetric (Ire) (Showcasing {GB}) in the G2 July S. and after that rival took the G2 Richmond S. and the fourth Ebro River (Ire) (Galileo Gold {GB}) the G1 Phoenix S. the form of that July 8 contest was looking rock-solid. With the operation already boasting this stable's G3 Molecomb S. winner Armor (GB) (No Nay Never) and Ebro River, the hardest task may be keeping the trio apart from here.

Richard Hannon said, “He's never done much at home, but often I find they are the best 2-year-olds. He wasn't there in his coat even in the July Stakes and didn't look great that day, but that's just him. Of all our 2-year-olds, he is the one with the most scope and he's going to be a big powerful horse next year. He's already got seven and I'd love to take him to the [G1] Dewhurst [at Newmarket Oct. 9], but he's in the [G1] Middle Park [at Newmarket Sept. 25] and the [G1 Prix] Jean-Luc Lagardere [at ParisLongchamp Oct. 3] so they are all possibilities. He's done it both ways, as in the July he was up with two others who dropped out and he was the only one who kept going and today he had a lead. That's hugely encouraging and he's an amenable horse and lovely to have anything to do with. Him getting beaten at Pontefract might have been the making of him, as we didn't go to Royal Ascot on the back of that defeat but he won't go on soft at all. He didn't go to Goodwood for that reason and that was the right decision. The Guineas is the long-term objective and he's big and strong enough, so that's the end-game. He's doing this in spite of his size, as he's a big physical.”

A useful type for Alan Jarvis, Lusail's dam Diaminda (Ire) (Diamond Green {Fr}) was tried in the 2013 G1 1000 Guineas won by this stable's Sky Lantern (Ire) (Red Clubs {Ire}) but trailed in last and was retired with her best effort being a fourth in the Listed Dick Poole Fillies' S. over this trip. She is a half to Fayr Jag (Ire) (Fayruz {GB}), one of man-of-the-moment Tim Easterby's best as the winner of the G1 Golden Jubilee S., G3 Ridgewood Pearl S., G3 Chipchase S. and G3 Hackwood S. Her daughter of Kodiac (GB) is due to sell at the upcoming Tattersalls October Yearling Sale Book 1, while she also has a filly foal by Cotai Glory (GB).