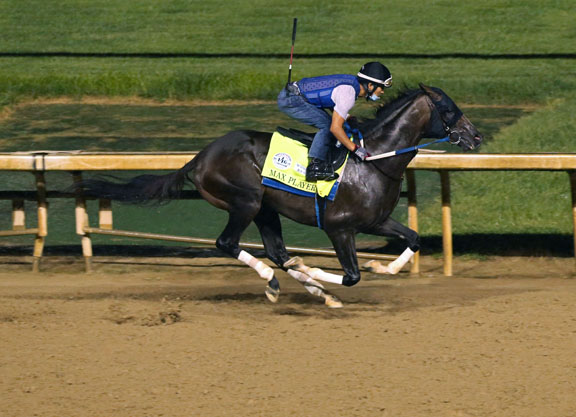 “He's continuing to do well,” Steve Asmussen, who has taken over training duties from Linda Rice, said. “I'm extremely excited about how he's going to run in the Kentucky Derby. I love how he looks going over the racetrack. His attitude is really good. He came in with a really good attitude and was moving really well. That has stayed the same.”

Max Player won the GIII Withers S. for the New York-based Rice in February and is coming off third-place efforts in the June 20 GI Belmont S. and Aug. 8 GI Travers S. He will be making his first start for Asmussen in the Derby.

“The reason he is here is to give him time to acclimate to the track and the surroundings to hopefully make up the difference,” Asmussen said. “He's been third to Tiz the Law in his last two races. That horse is the deserving favorite and a tall task. You only have one chance to run in the Derby and we just wanted to do everything we could to give him his best chance.”

Allied Racing Stable's Mr. Big News (Giant's Causeway) has been added to the field of Derby contenders. Fifth in the Feb. 15 GII Risen Star S., he won the Apr. 11 Oaklawn S. and is coming off a sixth-place effort in the July 11 GII Toyota Blue Grass S.

“I know we don't have some of the numbers like Tiz the Law, Art Collector and Honor A. P., but this horse is improving,” said owner Chester Thomas. “I think he is absolutely going to love the distance and will make a big run late.”

Trained by Bret Calhoun, Mr. Big News will be ridden by  Gabriel Saez in the Derby. He worked five furlongs in 1:04.40 (2/2) at Churchill Downs Sunday.