Mare of the Moment: London Plane 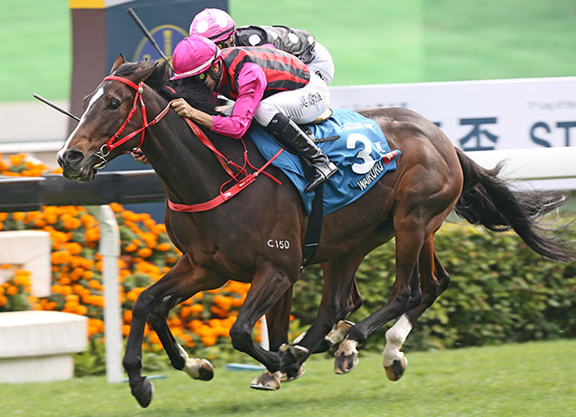 Recognising breeders' achievements, the Mare of the Moment is run in association with the Irish National Stud. The owner of the mare will receive a personalised headcollar. This month's prize goes to London Plane (Ire), the dam of G1 Stewards' Cup winner Waikuku (Ire).

Competitive black-type action continues in Hong Kong throughout the winter with plenty of expatriate horses to the fore. The G1 Stewards' Cup on Jan. 19 was won by the former John Oxx-trained Waikuku (Ire) (Harbour Watch {Ire}). The 5-year-old, who is now in the stable of John Size, was bred by Shane Molan of Riversfield Stud in Co. Limerick from the Danehill Dancer (Ire) mare London Plane (Ire).

In an article written by TDN's Managing Editor Alan Carasso last year, Molan described how he came to purchase the mare. “She represented good value, first and foremost, and she's by a good broodmare sire,” he said. “She had a good bit of size and she was a full-sister to quite a good horse in Al Waab. On pedigree, we wanted to buy something that we could afford and then on physical, she had good bone, a good step, a very nice frame.”

London Plane's €13,500 price tag looks good value given what her first foal has gone on to do. Waikuku is now a seven-time winner and also landed the G2 Jockey Club Mile last November. For Molan this was his first foray into breeding on his own and it could not have started better for him.

While choosing a stallion can seem like a drawn-out process, for Molan choosing Harbour Watch must have been an easier decision to make given that his father, Thomas Molan, bred the stallion. “We liked his first foals, he was really stamping his stock. He was a good-sized horse himself and a very good 2-year-old and we wanted to get a good-sized [stallion] into her for her first foal. And then, obviously, to support a stallion that Dad bred himself,” remarked Molan last year.

Waikuku was sold as a yearling for €33,000 at the Tattersalls Ireland September Yearling Sale to John Oxx and was fifth on debut before winning his maiden at Leopardstown. This was to be his only win in Ireland as he was purchased for Hong Kong and joined the stable of John Size.

London Plane has since given Molan a Tamayuz (GB) gelding called It's Good To Laugh (Ire), who is in training with Clive Cox and who won on his second start last August as a 2-year-old. This gelding yielded a far greater return for Molan when sold through the same ring as his sibling for €100,000 to Kevin Ross Bloodstock on behalf of Paul and Clare Rooney. The mare also has a yearling filly by Highland Reel (Ire), whose residual value, if nothing else, has just increased, and London Plane is due to foal to Australia (GB) in the coming months.