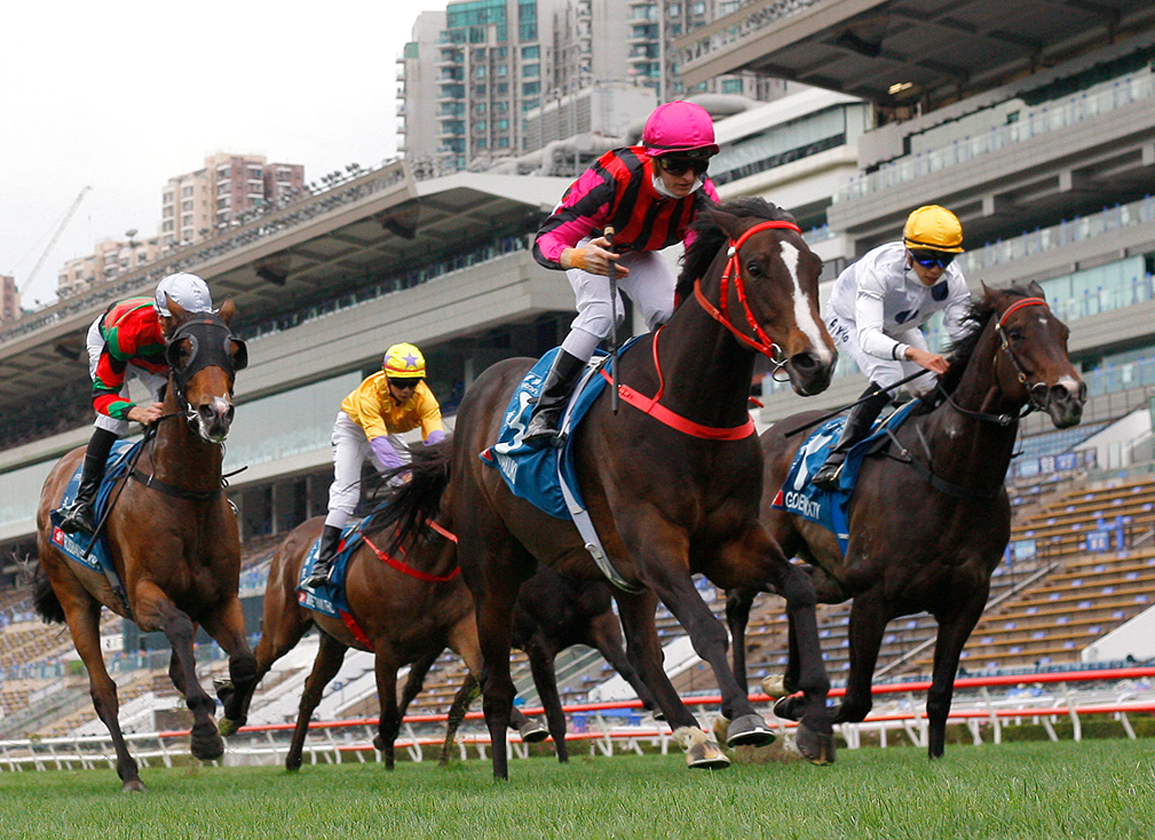 The Omicron variant of the COVID-19 pandemic dictated that there would be no one on hand Sunday at Sha Tin Racecourse to 'witness' the running of the G1 Stewards' Cup. But there was a collective 'silence' right round the world when Waikuku (Ire) (Harbour Watch {Ire}) crossed the wire three-parts of a length to the good of the virtually unbeatable Golden Sixty (Aus) (Medaglia d'Oro), who saw his attempt to equal the winning streak of Silent Witness (Aus) go by the wayside while tasting defeat for just the second time in his 21-race career.

For the record, Russian Emperor (Ire) (Galileo {Ire}) was an eye-catching third over an insufficient trip, but all eyes were on the reigning Hong Kong Horse of the Year Golden Sixty, who jumped brilliantly from gate one, but then eased back to take up his customary position at the back, a few lengths less handy than last time in the G1 Longines Hong Kong Mile. Healthy Happy (Aus) (Zoustar {Aus}) lobbed them along up front, but Zac Purton had Waikuku right at his flank through an opening 800 metres in :49.47, some eight to nine lengths off standard time, as Golden Sixty raced keenly and tactically disadvantaged beneath Vincent Ho.

Steered out and around Hong Kong Mile runner-up More Than This (GB) (Dutch Art {GB}) at the three-furlong pole, having continued to race freely, and losing crucial ground in the process, Golden Sixty had clear sailing into the stretch, but Waikuku raced to the front with a bit more than 300 metres to travel and the alarm bells would have been sounded. Though he was able to produce his typical barnstorming finish, with a final quarter-mile in :21.95, Golden Sixty had simply been set a task too tall. Unlike when he managed to scrape home in the 2020 Hong Kong Derby off a similarly slow tempo, he could not do so this time, and Waikuku was able to cause the upset. It was a seventh Stewards' Cup for trainer John Size.

“I was really happy with the way the race was run, I was in a lovely rhythm and I knew he was going to give me a kick but with Golden Sixty in the race, you're never home until you pass the post,” said Purton, who only recently returned from injuries suffered in that horror fall in the Hong Kong Sprint six weeks ago. “He's run many horses down the last few years, he's a champion and obviously the race wasn't run to suit him today.”

Golden Sixty was tasting defeat for the first time in 30 months.

“The horse is OK–he appears to have pulled up well,” trainer Francis Lui said. “It was just the draw. The way the race was run, he needed to be closer but, from the inside, it wasn't possible today.”

Winner of this race in 2020 when favoured at 1-2, the 2019 Derby runner-up was exiting a three-lengths' seventh to Golden Sixty in the international Mile Dec. 12, having previously run second to him in the G2 Jockey Club Mile Nov. 20.

Waikuku is one of two top-level scorers for the late Harbour Watch (Ire), the other being G1 Coronation Cup hero Pyledriver (GB), a latest second in the G1 Longines Hong Kong Vase last month.

Away alertly for Vincent Ho, Stronger allowed the speedier early types to go on with it and raced with only Sky Field behind him, as Computer Patch (Aus) (Exceed and Excel {Aus}) and Courier Wonder (NZ) (Sacred Falls {NZ}) went a solid gallop up front. Eased out into about the six path as the field hit the straight, with Sky Field now alongside, Stronger (1098 pounds) was roused to the front inside the furlong marker and managed to hold the physically more imposing and similarly colored Sky Field (1205 pounds) in the run to the line.

A Group 3 winner in Australia for Peter and Paul Snowden, Stronger won one of nine starts for trainer John Moore in 2019/2020 and joined the Whyte yard upon the latter's compulsory retirement last season. Stronger scored in his first run for the barn in November 2020, and though he had dropped his last 13 races, posted board finishes four times at group level, earning the right to soldier on. He was most recently fifth in the Sprint Dec. 12.

Star Pupil is the dam of a yearling filly by Pariah (Aus), a filly foal by Snitzel (Aus) and visited the latter again last November.