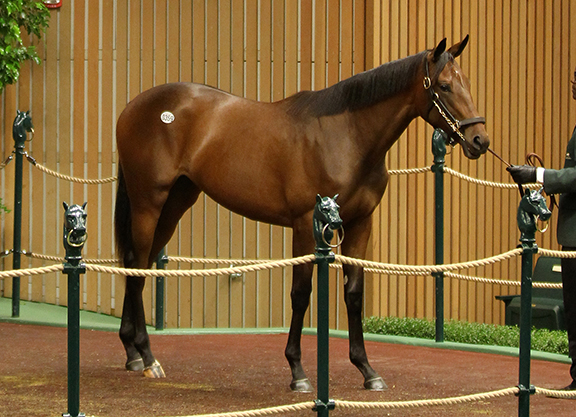 Bridlewood Cat in the ring at Keeneland September | Keeneland

Bridlewood Farm went to $750,000 at Keeneland September to secure BRIDLEWOOD CAT (Street Sense&log=">Street Sense), a half-sister to 2016 GI Spinaway S. heroine Sweet Loretta (Tapit). Her stakes-placed dam is also a half to Canadian champion and GISW Spring in the Air (Spring At Last), with MGSW Tejano Run (Tejano) residing further down the page. Trained by Jonathan Thomas, the bay has shown speed in several Gulfstream workouts, most notably a half-mile breeze in :48 flat (4/70) Mar. 3. Edwin Anthony's Skep (Bodemeister) is bred to be a runner and sold for $200,000 at OBS April after working a quarter-mile in :21 2/5. The first foal out of her dam, she counts as her second dam 2009 GI Darley Debutante S. heroine Mi Sueno (Pulpit), while her third dam is the brilliantly fast 2004 GI Ashland S. winner Madcap Escapade (Hennessy). TJCIS PPs

In a rarity this late in the season, a field of only first-time starters will line up as racing returns to Santa Anita Friday, with 10 colts and geldings set to open their accounts. Headlining the group is OXO Equine's $750,000 Fasig-Tipton Saratoga buy OGGONIS (Animal Kingdom), previously scratched out of a similar spot Feb. 14. Trained by Jerry Hollendorfer, the bay is out of a half-sister to GSW Indian Firewater (Indian Charlie) and has had a stamina-building worktab, capped by a six-furlong move over the local training track in 1:16 2/5 (2/4) Mar. 23. Bob Baffert appears to have a promising runner in Rashed Humaid Rashed's Rafal (Alpha). From the first crop of his MGISW sire, the New York-bred half to New York Derby winner Force (Flatter) summoned $150,000 at OBS April after breezing a co-bullet quarter-mile in :20 3/5. He's built on that promise with a handful of blistering workouts, most notably a :58 4/5 (1/43) five-furlong spin from the gate here Mar. 4. TJCIS PPs