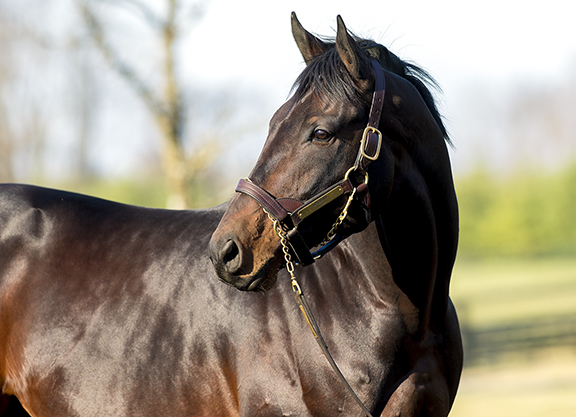 Laoban was one of three first-crop sires represented by a Grade I winner in 2020. | Sarah Andrew

The buzz started around this time last year. The first crop of 2-year-olds from Sequel New York's Laoban were fast.

In a TDN series last spring polling various juvenile consignors and buyers, the son of Uncle Mo was on several shrewd observers' lists as a predicted under-the-radar stallion.

“Laoban is a sneaky one that I'm not sure if a lot of people will notice,” Brandon Rice had said last March. “I can see that there's guaranteed speed, and I could see him having a break out year…They all have a pleasing physical type. Horses that stamp their progeny this way usually have at least some level of success.”

“There's been some buzz surrounding him by the breeze-up consignors,” Justin Casse had echoed. “He's by Uncle Mo, which should help with precocity, and he has the numbers. I think he has a chance to be a premier stallion in New York going forward.”

Casse was correct in hypothesizing Laoban's shot at becoming a premier stallion, but this year the young sire will have the opportunity to take it one step further by hosting his fifth book of mares in Kentucky.

First his daughter Simply Ravishing took the GI Darley Alcibiades by over six lengths. Then the next day, his son Keepmeinmind ran second to Essential Quality (Tapit) in the GI Claiborne Breeders' Futurity.

Later that month, it was announced that Laoban would be relocating to WinStar Farm.

“Coming from New York, he stood his last season for $5,000,” said WinStar's David Hanley. “The difference in quality of mares he's getting now off a $25,000 fee, with the kind of physicals that he gets, I think he really has the possibility to be a big success as a stallion.”

Laoban wrapped up the 2020 season in second place on the freshman sire earnings list. His other top performers included Ava's Grace, his first winner from July who ran back to a third-place finish in the GII Adirondack S., dual New York-bred stakes winner Laobanonaprayer and Dreamer's Disease, who broke his maiden on the turf and switched back to dirt to go wire-to-wire and win an optional claimer at Keeneland by 4 1/2 lengths.

“From the kind of mares that he bred to consistently get these kind of runners, I think it speaks a lot to his future as a stallion,” Hanley noted.

Laoban, along with another son of Uncle Mo in Darley's Nyquist, led their class by graded stakes winners last year after Keepmeinmind became Laoban's second when he took the GII Kentucky Jockey Club S. in November.

When Keepmeinmind enjoyed a brief freshening at WinStar following his win in the Jockey Club, Hanley said he recalls being awed by the youngster.

“Wow, what a nice horse he is,” Hanley said. “Every time you see him on the track, he's such an impressive physical specimen and a beautiful mover. A disposition just like Laoban himself, really laid back.”

Laoban's momentum didn't stop over the winter as several of his weanlings carried hefty price tags at the breeding stock sales.

A colt out of Dixie Gem (Stonesider) was the highest-priced weanling at the Fasig-Tipton Midlantic December Mixed Sale, going for $150,000 to Machmer Hall.

At the Keeneland January Sale, a colt out of Making a Point (Freud) sold for $120,000 to Cavalier Bloodstock in the first session. Later in the week, a colt out of Jade (Colonel John) sold for $70,000 as the highest-priced short yearling of the third session.

Then at the OBS Winter Mixed Sale, his filly out of Best Reward (Grand Reward) topped the sale, going to Sand Hill Stables for $175,000.

Hanley spoke on visiting this youngest crop at the sales over the past months.

“As they came out, they all had that similar sort of balance. They stand up square and have a beautiful shoulder. They walk off just like he does. Then when you go look at the mares and you see how much he moves those mares up physically, I thought it was quite astonishing because he was literally stamping his stock and they had his qualities. All beautiful horses off a $7,500 stud fee.”

He continued, “Then you look at the horse himself and he's such an impressive individual. He's got such stature to him. He's got the most beautiful shoulder, length of leg and a beautiful long, clean neck. He's such a classy horse to be around. I think that was evident in his stock as well.”

The next few weeks could prove to be defining for Laoban's early success as several first-crop 3-year-olds aim towards a start on Derby weekend.

Keepmeinmind is expected to return to the starting gate in the GII Rebel S. at Oaklawn Park on Mar. 13 while Simply Ravishing remains uncommitted to her next start, but is ranked highly in Bill Finley's most recent TDN Oaks Top 10. Meanwhile Laobanonaprayer looks to get her first victory against open company in this weekend's Busher Invitational S., where a win would earn 50 points towards the Oaks.

Hanley said Laoban has been well received by Kentucky breeders since his arrival, but that he is confident their new addition will see more success before the first Kentucky-breds hit the track. After filling a book of 122 in his first year, Laoban bred a combined 230 mares in his next three years at Sequel.

“He had very impressive 2-year-olds off a stud fee of $7,500,” he said. “When you look at the pedigrees they're out of, he has really moved those mares up. [His progeny to date] don't have very exciting pedigrees, just very good physicals. When you look at the mares that are booked to him this year, he's got 130 mares booked at a fee of $25,000. If he can continue to stamp his stock and produce the kind of quality that he had out of those lesser mares, I think the future for Laoban is really exciting.”

The GII Jim Dandy S. winner is out of stakes-placed Chattertown (Speightstown) and his half-sister produced Mr. Hustle (Declaration of War), a champion 2-year-old in Canada. His extended family also includes three-time Grade I winner I'm a Chatterbox (Munnings).

“He's out of a Speightstown mare and her second dam is by Danzig,” Hanley noted. “Being an Uncle Mo, he's an outcross for a lot of mares. Physically, he fits a lot of mares. He's a big horse, but he's very well-made. He's a great horse to be around. He's doing great in the breeding shed, has settled in really well and we're very happy with how it's going with him right now.”