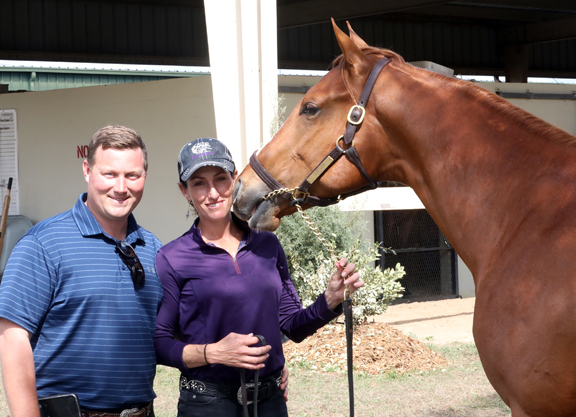 Since we are a moderate-scale operation, I often feel that there are young sires that I have coveted after but I am unable to attain anything from their first crop. This year, I was lucky enough to obtain a colt and a filly from the first crop of Air Force Blue. One is to go to the sales and one will go to the races. (Editor's Note: the colt going to the sales sold for $390,000 last week at OBS March. See Out of the 'Blue' for more.)

If you had a race amongst all of the horses in my stable this year, I think these two Air Force Blues might come in first and second. That didn't happen by accident.

They're beautiful, sellable, and are great movers with great frames. They aren't limited to being sprinters or exclusively one-paced routers, these horses seem like they have all the goods. Their shape is enticing, and once we start putting pressure on them, they stride a little bigger, and show a little more brilliance than the horses next door to them.

I'm a big fan of Air Force Blue based on what I was lucky enough to get in my stable. My stable is largely horses I have hand-picked because of really good bodies and pedigrees I can afford, and I don't think there's any more promising candidates than the Air Force Blues in my stable.

They fit the 'perfect-medium stature with excellent motion' type common to the War Fronts. They are so efficient in their movement, and I can't even work out what surface they prefer. They move great over synthetic and dirt. Even though I might have a hunch that they could be turfy due to the success of the family on the turf, I would say it doesn't need to be exclusive. I wouldn't be surprised if he has stone cold runners on both surfaces.

We all can be biased and blind to the sires that we don't have in our stables. It's not like we get a sample pack from every first-crop sire. So, from shopping the sales, I have also noticed the Runhappys. I really like them physically. I've also liked the Frosteds.

And again, the Air Force Blues keep hitting my list consistently at the sales. Usually that's an indicator for me when they keep hitting as I'm going through thousands of horses and looking strictly at body types until purchasing time.

I only have a few Laobans and a few Not This Times, but I'm choosing those two as the stallions I'm most excited about as under-the-radar sires.

The Not This Times that I have are really impressing me. I'm finding that they have good speed when I press on them, combined with big, dreamy body types. They have the full package, so they could by dynamite.

Laoban is a sneaky one that I'm not sure if a lot of people will notice. I can see that there's guaranteed speed, and I could see him having a break out year. They are going to come out running hard if we are allowed to have more 2-year-old sales this year. They all have a pleasing physical type. Horses that stamp their progeny this way usually have at least some level of success.