Labor Reform in Washington: Could it Help Racing? 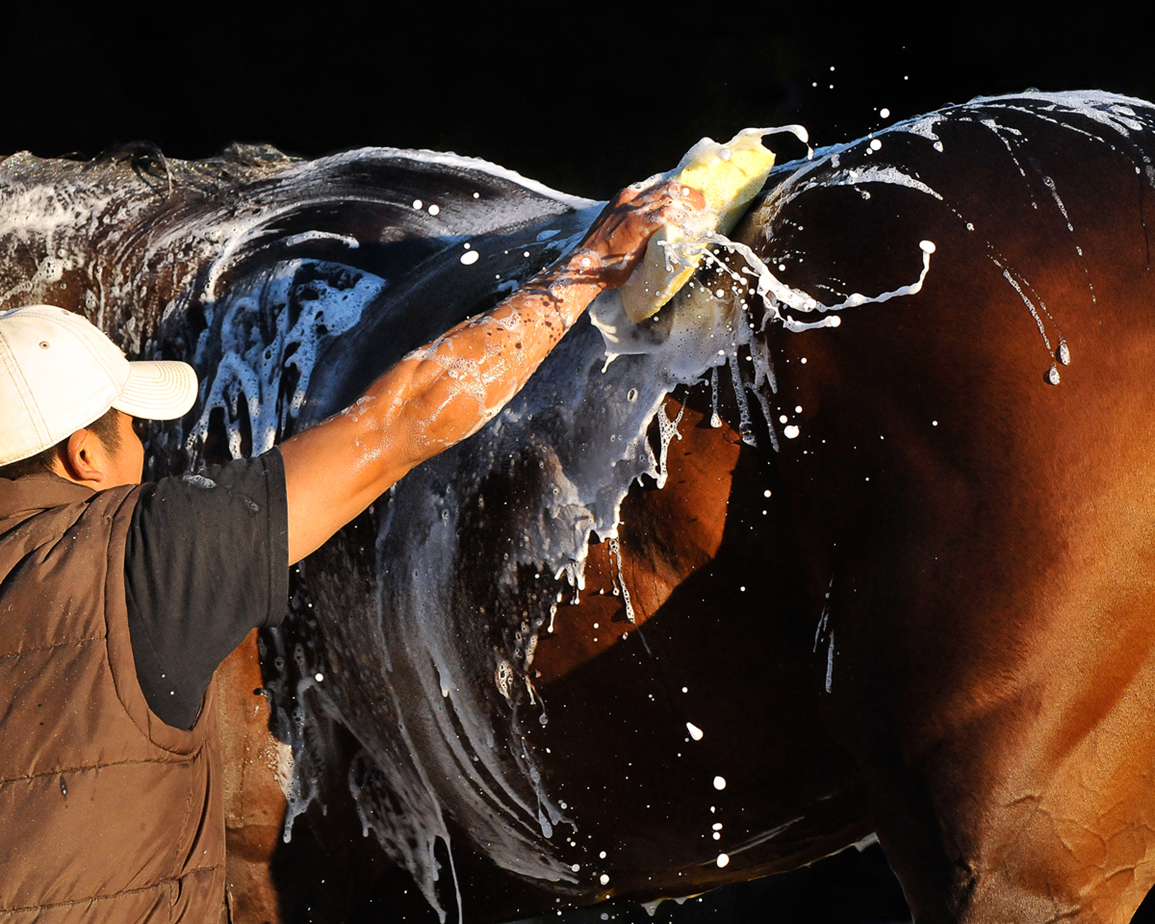 For many trainers around the country, their biggest practical worry from day to day isn't the patchwork quilt of medication rules and regulations, or the fear that one trainer has an unfair competitive edge over another, but whether they've enough grooms, hotwalkers and riders populating their barns to properly tend to the horses in their care.

With fewer and fewer North Americans siphoning into horse racing, the sport has turned for relief, of course, with growing reliance on Central and South America–what has proven an increasingly tenuous stable of talent the more calcified the topic of immigration has become politically.

“It's always been tough,” said trainer Dale Romans, about the hiring of immigrant workers. “The whole system is messed up no matter what administration is in. It just needs to be changed and fixed.”

After many years of political atrophy surrounding the issue, however, there are a number of bills either floating around Capitol Hill already, or else waiting in the wings, which offer the promise of long-needed assistance to the industry, an integral component of which appears to be a sweeping piece of legislation called the Farm Workforce Modernization Act.

The act passed the house earlier this year, and farmworker groups met Wednesday with a bipartisan group of senators, along with agriculture secretary Tom Vilsack, to discuss introducing a senate version of the bill.

“There's all of a sudden multiple buckets,” said Eric Hamelback, CEO of the National Horsemen's Benevolent and Protective Association (HBPA), of these various pieces of legislation. “All of them, to some extent, are positive for our industry and the overall guest workers program.”

Arguably the most commonly requested visa for backstretch workers is the H2-B, awarded to seasonal “non-agricultural” workers like those in landscaping, hospitality sectors, seafood and in some construction jobs.

The number of H-2Bs is capped at 66,000 annually, with an even split of 33,000 available for each half of the federal government's fiscal year. And while additional visas are frequently made available, they're not always enough to meet demand.

Just look at this February, when the fiscal year 2021 H-2B cap of 33,000 slots was easily reached. The Department of Labor (DOL) reported receiving applications for nearly 100,000 separate workers.

To help release a bit of steam from the system, congress has periodically enacted a returning worker provision, which permits those who had previously been in the U.S. on an H-2B visa–granted during a particular period–to be exempt from that cap.

The last time this program went into effect–towards the end of Dec. 2015–the returning worker exemption permitted those who had previously held an H-2B visa issued between Oct. 2012 and Sept. 2015 to be cap-exempt for fiscal year 2016.

That exemption expired at the end of 2016 and has not been re-enacted since.

On Tuesday, however, a bipartisan group of senators introduced the H2-B Returning Worker Exception Act of 2021 designed to develop a long-term solution to permanently address the annual H-2B visa cap.

As currently written, the bill does a number of things, including amending the definition of “returning worker” to include anyone who has entered the U.S. on an H-2B visa in any one of the 3 previous years.

The bill also seeks to streamline the application process, requiring the DOL to maintain a public online job registry. It would also implement new integrity measures and anti-fraud provisions.

Romans calls the re-enactment of the returning worker exemption something that would make it “much easier” for him to hold onto valuable employees.

“Think about running a business where you have to have 60 employees at all times, and you never know for sure if you're going to get classified or get the visas,” he said. “How can you consistently operate your business like that?”

According to Hamelback, of all the pieces of legislation swirling around Washington, this bill potentially has the most political traction.

“This is something we've always advocated for,” Hamelback said. “And this has been the first time, at least since I've been in my current role, there's been a strong champion for that.”

One of the biggest obstacles to securing, and then holding onto, immigrant labor in horse racing surrounds the way backstretch grooms, hotwalkers and exercise riders are not legally classified as agricultural workers.

This means they are not eligible to apply for H-2A visas, geared towards field workers and general farm laborers, among others. Why is that important? For one, there's no cap on the number of H-2A visas issued annually.

According to various sources, there's a potential bill being drafted that, if introduced and passed, would redefine the remit of the agricultural worker to include laborers related to the breeding, care and feeding of horses.

According to these sources, the bill could be attached as an amendment to the Farm Workforce Modernization Act, a sweeping piece of legislation that would provide undocumented farmworkers and their family members with a path towards legal citizenship, and impose mandatory employment verification (“E-verify”) in agriculture, among a host of other changes.

Any move to reclassify equine laborers as agricultural workers, Hamelback said, needs to be done in such a way that backstretch workers are eligible for both H-2A and H-2B visas.

“The definition is very general and open, which usually is good, and we don't want it to close the door on H-2Bs at this point,” said Hamelback.

Back in 2017, a bill–the Agricultural Guestworker Act of 2017–was introduced into Congress which, had it proven successful, would have created an entirely new category of guestworker visa, coined the H-2C.

As envisioned, the H-2C visa was seen as a replacement to the H-2A system–seen as cumbersome, outdated and broken–bringing a more flexible program, one potentially open to workers in racing.

Indeed, the legislation received support before from key industry groups like the National Thoroughbred Racing Association (NTRA) and the Thoroughbred Owners of California (TOC).

According to Hamelback, there is talk among legislators on Capitol Hill for similar legislation to be potentially reintroduced in the near future.

“But we don't have a lot of details on that at the moment,” he said, stressing the tenuous nature of any immigration-related negotiations in the current political climate. “It's a difficult topic that sometimes isn't approached properly.”

While these bills maneuver their way through Washington–successfully or not, as we'll find out–the daily woes surrounding staffing will continue to chaff.

And so, has the advent of a new administration brought about any meaningful change to the immigration environment? Attorneys and trainers send different messages.

“The difference is huge,” said Will Velie, an Oklahoma-based immigration attorney with many clients in the racing industry.

The stringent immigration policies of the Donald Trump administration saw pretty much any illegal immigrant apprehended by law enforcement vulnerable to deportation proceedings, no matter their criminal background, said Velie.

But the new administration, he said, has reinstituted a prior policy, whereby illegal immigrants who come into contact with law enforcement are priorities for deportation only if they fit the following five categories of criminal history: Felons, gun possession, drugs, gang membership or domestic violence.

This change has had a knock-on effect for racing, said Velie, explaining how it has loosened the pressure valve on backstretch communities. “Just like that, the temperature dropped.”

Due to a COVID-related backlog in biometric appointments–a reported 1.3 million pending applicants earlier this year–the U.S Citizenship and Immigration Services has suspended fingerprint requirements for certain petitions, another development that has helped ease pressure on the system, said Albany-based immigration attorney, Leonard D'Arrigo.

“Every day, it seems, they're issuing a new executive order or some policy guidance, undoing what the prior administration has done,” he said.

According to Romans, however, from a practical standpoint, the task of finding talented and reliable staff is as difficult as it has always been. Which is why any change to the system should be broad and sweeping rather than incremental, he added.

“We need a comprehensive overhaul of the whole thing,” Romans said. “Not just a few little pieces they try to patch it up with.”