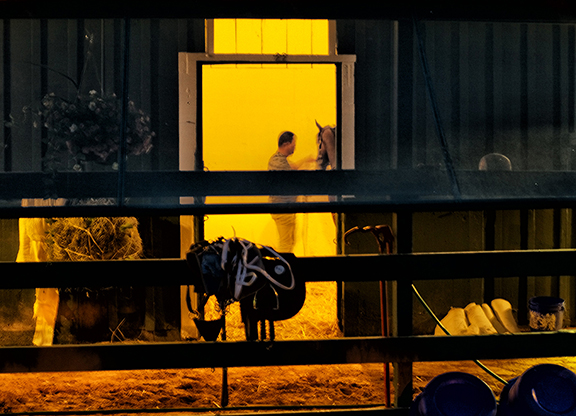 Last year, Delaware Park-based Tim Ritchey, trainer of Preakness and Belmont Stakes-winning Afleet Alex, was offered 15 horses to train, but he turned them away. Why?

“There was no way we could have taken those extra 15 horses because we didn’t have the grooms,” said Ritchey’s wife, Janet, who said that a continued shortage of staff means they’re unable to bring to the track two 2-year-olds currently cooling their heels at an outside training center.

“When I get more workers, I can get more horses. And when I get more horses, I can employ more American workers, like the exercise riders, hotwalkers, vets,” she said, describing as “very small” an available pool of American stable staff. The seasonal H-2B work visa program, however, could be a “perfect solution” to the problem, she said. But political and bureaucratic hurdles–the online application site crashed early this year, for example, causing chaos–the H-2B program “has become ridiculous,” she added. “It’s so frustrating.”

The Ritcheys are far from alone when it comes to decrying a broken immigration system. Nor are trainers only hurting through its impact on staff levels–just ask Chad Brown, recently fined $1.6 million in back wages, liquidated damages, and civil penalties after agreeing to “willful violations of the Fair Labor Standards Act and the labor provisions of the H-2B non-immigrant visa program.”
According to Will Velie, an Oklahoma-based immigration attorney with a number of clients in the racing industry, there are two factors weighing on the industry right now that make it hard for trainers to find and retain documented and competent backstretch workers. A low unemployment rate is one.

Another is increased immigration enforcement under the current administration, which has had “a very noticeable effect on the number of people who will actually go out and be available to work,” Velie said. “The story I get at every track I go to is, people used to go barn to barn asking if there was any work available, and there’s just nobody anymore.”

By far the most popular available visa for backstretch workers is the H-2B–a seasonal visa designed for occupations like hospitality workers, landscapers and construction workers.

Given the sheer volume of applications, the government announced back in March that it would issue another 30,000 H-2B visas to help ease the bottleneck. Velie warned, however, that the additional quota would offer the racing industry only limited relief. “How many does horse racing use? I’d say less than 1000 a year,” said Velie. Interestingly, the spending bill Congress passed in February gave DHS the authority to add as many as 69,320 additional H-2B visas.

Crucially, the additional H-2B visas were available only to applicants who have held H-2B status at least once during the past three fiscal years. This brings up another important technicality. The returning worker exemption–which excludes from the annual cap workers who have held an H-2B visa during the prior three years–was last in effect in 2016, and has not been lifted (more on this later in the article).

Perhaps most salient to the industry right now is how the number of targeted immigration raids has diminished, while the volume of U.S. Departments of Labor (DOL), Homeland Security (DHS) and Immigration and Customs Enforcement (ICE) worksite inspections is on the rise.

“They decided to go where the deep pockets are to get some money out of it instead of just picking up aliens and sending them home,” said George Crimarco, an immigration attorney in Miami. “These trainers are pretty much defenseless when it comes to that.”

“Employers could be going through multiple agency audits at the same time,” said D’Arrigo. “And a lot of time, the information being requested is overlapping. These agencies don’t really share information, so they’re sometimes having to comply with all these different requests multiple times.”

During an audit, both the employer and employees can be called on to provide evidence. “They will talk to everybody,” warned D’Arrigo, who added that Brown’s case has triggered a “huge surge in calls” from worried trainers and seasonal businesses.

One of those trainers under a DOL audit is Tom Morley, currently based in Belmont Park with about 35 horses. “I’m in my third year,” said Morley, of the time that has lapsed since the audit first began. “I think what’s probably happened is that my case is relatively small, that it’s been shuffled to the side while they take care of these bigger ones.”

Morley describes himself as relatively lucky in that many of his employees are U.S. citizens who have worked for him for years. But the tight cap on the number of H-2B visas combined with the lack of U.S. workers willing to do the work makes finding backstretch staff a real headache, in certainly jurisdictions especially.

“New Orleans is a shambles,” Morley said. “The hotwalker base down there, they don’t show up, and when they do show up, you’re delighted to see them, to be honest. You don’t fire them. It’s a case of ‘here’s a shank, get on with it.'”

As for the audit, it’s a “nightmare,” Morley said. “You’ve no idea what number they’re going to come back with,” he added, describing the experience as “three years of waking up in the middle of the night worrying about it.”

Each racing jurisdiction enforces the immigration issue differently, most if not all putting the onus primarily on the employer to verify their employees’ legal status, said Velie.

Backstretch workers looking to get licensed in California, for example, are fingerprinted and asked for photo identification, typically a driver’s license or a state-issued form of ID, or else a license from another racing jurisdiction that also requires fingerprinting. The California Horse Racing Board can also request additional immigration-related documentation, such as work visas and attorneys’ letters.

When asked which jurisdictions are the strictest, Velie singled out Indiana, Minnesota, New York, Pennsylvania and Iowa. He explained that Indiana and Minnesota both in recent years considered using E-Verify as a licensing requirement. E-Verify is an online employment verification database much stricter than the I-9 program. It’s also notorious for a high error rate.

“That would have emptied out the backside of the track,” Velie said, about the E-Verify proposal. Instead, when backstretch workers are now licensed in Indiana and Minnesota, the trainer employing them must sign a document acknowledging their responsibility for maintaining I-9s, said Velie. This doesn’t, however, preclude trainers from using E-Verify themselves.

Which brings us back to the returning worker exemption. Competition for the 33,000 H-2B visas available in the fall is less intense than for the spring, and trainers should use that to their advantage, Velie said.

“If you get your guys in on the winter visas, there’s never any quota pressure,” he said. What’s more, he said, “when I file for my spring visas, instead of filing for workers out of country, I do in-country extensions for the guys with winter H-2Bs, and they’re not subject to the cap. A worker can be on an H-2B for up to three years,” Velie added.

There are still some important guidelines employers must comply with in that particular program, Velie said, and he recommends trainers speak with their immigration attorneys before going down that route.

As for the uptick in workplace inspections, D’Arrigo recommends that trainers conduct self-audits, especially when it comes to wage and hour, and I-9 documentation. “Those are the two things that result in costing you the most,” he said.

“Have someone come in and audit your current practices, look at what you’re doing, point out the things you’re violating and come up with systems to be in compliance,” he said, adding that “we always recommend that clients regularly review all their 1-9 paperwork to identify errors before an actual audit.”

Given the bureaucratic red-tape that employers face, along with the daily struggles of running a barn, D’Arrigo said he sympathizes with trainers. “They’re operating out of a horse stable,” he said. “They don’t have an office. They don’t have a sophisticated time-clock system.”

Back at Delaware, Bessie Gruwell, executive director of the Delaware Thoroughbred Horseman’s Association, confirmed the dire staffing situation facing trainers in the state. “We are seriously, seriously in need of much more help, and I don’t think that’s just us. That’s everywhere across the country,” she said.

As such, the industry must do better at attracting American workers, Gruwell, said. She pointed to Pennsylvania’s A Leg Up program–a mentorship designed to bring racing neophytes to the backstretch–as just such an example.