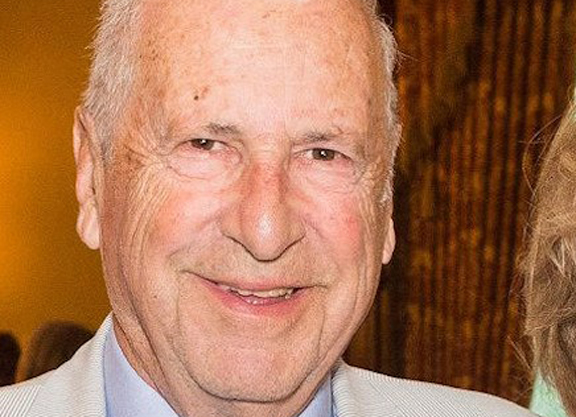 Funeral services were held Sunday for Herb Moelis, who bred, raced and sold horses for parts of five decades at the CandyLand Farm he founded in Middletown, Delaware. He was 91 and had recently suffered a bout of pneumonia as a complication from a years-long battle against Parkinson's disease.

Known for his passion for the sport, an even-keeled nature, and quiet, steadfast generosity, Moelis helped to create the Thoroughbred Charities of America (TCA), which since 1990 has distributed over $26 million to over 200 approved organizations.

Mike Palmer, who over the course of 30 years worked his way up from farm worker to CandyLand's general manager to being Moelis's business partner in various bloodstock endeavors, confirmed the details of his Oct. 6 passing in a Monday phone interview, noting that Moelis died “extremely peacefully” at his home on the farm property.

“He was a friend and a mentor. I'd call him my 'employer,' but what I did for Mr. Moelis wasn't work,” Palmer said. “It was what we both loved to do. In fact, he probably wouldn't want me to be calling him 'Mr. Moelis.' He always wanted me to call him Herb. He never thought he was better than anybody else. He was just a man's man. A true, true gentleman is what he was.

“He'd walk up to the barn with his dogs, a half mile every single day for 30 years, just to check in,” Palmer said. “And he and I would chat. Mostly the horses, matings, work that needed to be done. But a lot of times, we would just talk about life, for hours at a time. He was one of those guys whose horse could win by 17 lengths or lose by 17 lengths and he would have the same emotion. He was just very low key, and nothing excited him.”

Originally from New York, Herbert Irwin Moelis graduated from the Wharton School of the University of Pennsylvania in 1953, then earned a law degree and graduate degree in taxation from New York University Law School in 1956. According to his TCA biography, Moelis established a career as a certified public accountant and tax attorney for 30 years, retiring from practice and relocating to Delaware in 1986.

Fulfilling a longtime horse racing dream, Moelis and his wife, Ellen, began to breed Thoroughbreds from a broodmare band of about 20, racing some and selling others at auction.

According to the TCA bio, in 1988 the Moelises claimed a 2-year-old filly named Redeemer for $20,000 because she was a descendant of the influential broodmare La Troienne. Redeemer injured herself in a paddock accident shortly thereafter and was retired, but she produced a foal by Houston who was the top-selling colt in the 1993 Saratoga sale. CandyLand was also a regular fixture atop the sales-topper lists at Timonium over the last several decades.

In addition to the TCA, Herb and Ellen established The Moelis Family Foundation, which is involved in granting funds to charities involved in medical research, animal welfare, and children's causes.

“Herb Moelis was a visionary for sure,” said TCA President Mike McMahon. “Before the formation of TCA, there was not a broad discussion about the aftercare of racehorses. 'Aftercare' wasn't even in our lexicon yet, but our founders knew they needed to help provide Thoroughbreds with an appropriate retirement from racing. Thirty-two years later the Herb's vision for TCA has helped thousands of Thoroughbreds and the people who care for them.”

Palmer detailed to TDN how his relationship with Moelis grew into almost a “father and son” type of bond.

After Palmer had worked for Moelis for about 10 years, the CandyLand founder underscored to Palmer how important it was to him to have Palmer be with the horses on his 160-acre property on a 24/7 basis. To accomplish that, Moelis offered Palmer land on the farm to build a house for his family, with Moelis paying for the design and construction of the home.

“I mean, who does that, right?” Palmer said. “I had to pinch myself when he offered me that.”

Later, Palmer would run his own Thoroughbred venture, DreamTime Stables, on that same land, always adding “at CandyLand” on his signage at sales out of respect for Moelis and the farm's good reputation.

“Sunday was hard,” Palmer said of Moelis's services. “His death wasn't a surprise, but I don't know if I've come to terms with it. But I have come to terms with Herb not being tired anymore. He fought as long as he could, and I think he might have fought a little too hard in my personal opinion–but that's just me knowing him.”