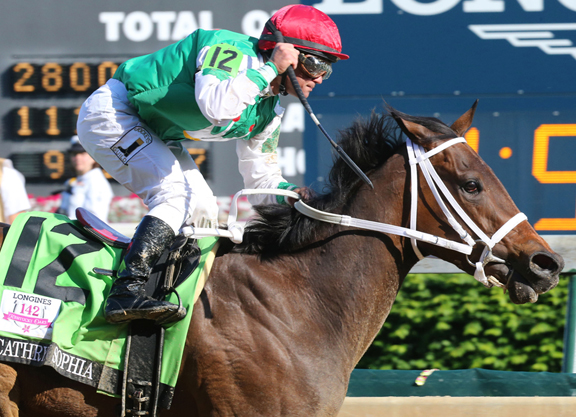 As reported in more detail by European Editor Emma Berry in Tuesday's TDN European Edition, members of the final crop of the late Deep Impact (Jpn) predictably dominated the yearling section of the JRHA Select Sale Monday on the island of Hokkaido, accounting for the day's top six sellers and eight of the top nine. Lot 114, the second Japanese foal from Sheave (Mineshaft)–the dam of GI Kentucky Oaks winner Cathryn Sophia (Street Boss)–led the way on a record final bid of ¥510 million ($4,766,356), as the offspring of American-bred and -raced mares acquired by the Yoshida family lit up the board one after the next.

Sheave, an unraced daughter of GSW & GISP Belterra (Unbridled), was bred by the late Bob Manfuso and was carrying a full-sister to Cathryn Sophia when she was acquired privately and exported to Japan. In February 2017, she produced Sharie al Malika (Jpn), who was a close second on debut in a Nakayama dirt maiden this past March. Sheave is the dam of the 2-year-old colt Satono Sky Turf (Jpn) (Deep Impact {Jpn}) and her colt foal by Heart's Cry (Jpn) sells Tuesday as lot 383.

The session's second-dearest offering at ¥400 million ($3,738,318) was lot 56, a colt out of Forever Darling (Congrats), who won the 2016 GII Santa Ynez S. for owner/trainer Richard Baltas and partners before continuing her career in the colors of Katsumi Yoshida. Forever Darling is a daughter of MSW & MGISP Darling My Darling (Deputy Minister), whose half-brother Zenno Rob Roy (Jpn) (Sunday Silence) won the 2004 G1 Japan Cup en route to Horse of the Year honors. Forever Darling's first produce, Mon Favori (Jpn) (Frankel {GB}), won a newcomers' event on turf over 1200 meters June 20 at Hakodate, scoring by five lengths in 1:08.7 (see below, gate 9). Daughters of Congrats have produced eight winners from nine starters in Japan, including Group 2 winner Hartley (Jpn) (Deep Impact {Jpn}).

During her racing career, Teddy's Promise (Salt Lake) registered her biggest victory in the 2011 GI La Brea S. and her Deep Impact foal of 2019 (lot 36) was the session's most expensive filly on a bid of ¥240 million ($2,242,991). Teddy's Promise is the dam of two winners from as many to race in Japan, most prominently My Rhapsody (Jpn) (Heart's Cry {Jpn}), victorious in Group 3 company last year and ninth, but not beaten far, behind Contrail (Jpn) (Deep Impact) in this year's G1 Tokyo Yushun (Japanese Derby). Teddy's Promise's current 2-year-old, a filly by 2015 Derby hero Duramente (Jpn), fetched ¥52 million last year.