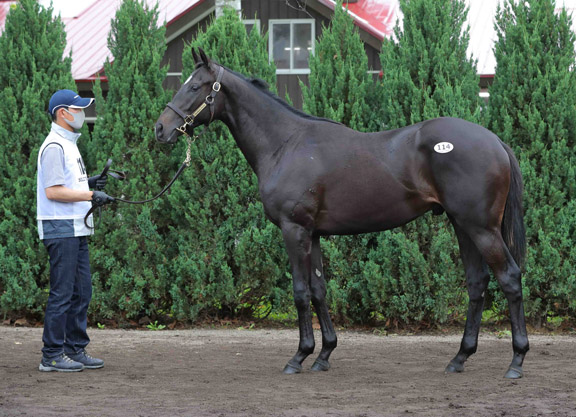 Almost a year after his death, Deep Impact (Jpn) still casts a long shadow over Japanese racing and breeding and the legendary stallion was responsible for two new records and the six most expensive yearlings at the JHRA Select Sale, at which turnover was down only fractionally from a record-breaking session in 2019.

The first record was set just 56 lots into the yearling session when his son out of the GII Santa Ynez S. winner Forever Darling (Congrats) sold for ¥400 million (£2.95m/€3.28m/$3.73m) to Masahiro Noda of Danox Co Ltd. That stood for only a matter of hours until lot 114 entered the ring. The dark brown colt, a half-brother to the Kentucky Oaks winner Cathryn Sophia (Street Boss) and offered by Northern Farm, swiftly set a new high price for the sale of ¥510 million (£3.77m/€4.19m/$4.75m) when bought by Tetsuhide Kunimoto, who has already enjoyed top-level success with a son of Deep Impact in the 2015 Japan Cup winner Shonan Pandora (Jpn). Like that colt, Kunimoto's latest acquisition will be trained by Tomokazu Takano.

“I have been involved in the ownership of racehorses for more than 35 years and I am sure this is one of the best yearlings I have ever seen,” said Kunimoto of the son of the unraced Mineshaft mare Sheave, whose Deep Impact 2-year-old has been named Satono Sky Turf. “I visited Northern Farm three times to inspect yearlings and went to the barn of Northern Farm at the sales ground this morning. I was determined to buy him. Price is no object with regard to this colt and I hope his quality is as high as his price.”

Absolute Lady (Ire) (Galileo {Ire}), the dam of dual French Classic winner La Cressonniere (Fr) (Le Havre {Ire}), was bought privately by Teruya Yoshida of Shadai Farm in 2016 and her first mating with Deep Impact produced a colt, who was offered as lot 67 and will in future race in the same colours as his sire after being bought by Kaneko Makoto Holdings Co Ltd for ¥220 million (£1.62m/€1.81m/$2.05m).

In all, 13 members of the penultimate crop of Deep Impact were catalogued for the sale, and 12 sold for an average price of ¥2.08 million (£1.54m/€1.71m/$1.94m). The stallion covered just 24 mares at Shadai in 2019 before succumbing to the neck injury that would ultimately claim his life.

Heart's Cry (Jpn), Deep Impact's erstwhile stud-mate and fellow son of Sunday Silence, has long been a dependable performer for Shadai and top among his 21 yearlings in the catalogue was lot 50, a half-brother to the American champion juvenile filly Champagne Room (Broken Vow), and another from leading consignor Northern Farm, who sold for ¥190 million (£1.4m/€1.56m/$1.77m). His dam Lucky To Be Me (Bernstein) was bought by Katsumi Yoshida for $1.25 million at the Keeneland November Sale of 2017 when carrying the colt now known as Lucky Mo (Jpn) (Uncle Mo).

The Shadai Stallion Station was dealt a double blow when King Kamehameha (Jpn) died just a fortnight after Deep Impact last August, having been pensioned before the 2019 covering season. Ten members of the former dual champion sire's final crop were offered for sale at Northern Horse Park, including lot 258, the last horse through the ring who, according to sale custom, was sold without reserve. None was needed, however, as the daughter of Marciano (Jpn) (Fuji Kiseki {Jpn}) brought the hammer down in favour of Azabu Shoji at ¥170 million (£1.25m/€1.39m/$1.58m) to end the sale as the second-most expensive filly of the day. Her dam is a sister to the top-class sprinter-miler and stallion Kinshasa No Kiseki (Aus), while another half-sibling, Catshaan (Aus) (Catrail), has produced the G1 AJC Australian Oaks winner Absolutely (Aus) (Redoute's Choice {Aus}).

The Kitten's Joy colt (lot 147), bought by Masahiro Noda and consigned by Shadai Farm, is out of the GI Santa Margarita S. winner Joyful Victory (Tapit). The mare's current 3-year-old Saqqara King (American Pharoah) is in training for Godolphin with Charlie Appleby and won last year at Newmarket as well as twice being listed-placed in France.

The War Front mare Old Time Waltz, a daughter of the G1 Queen Elizabeth II Challenge Cup winner Together (Ire) (Galileo {Ire}) was exported to Japan in 2018 when carrying a foal from the first crop of Coolmore's Caravaggio. The resultant offspring, also a first foal for the mare, was offered as lot 174 through Northern Farm and will race, like the King Kamehameha filly, for Azabu Shoji.

Assessing the market at the end of the yearling session, Northern Farm principal Katsumi Yoshida, said, “This is an amazing market. I was actually worried about the market because there were travel restrictions in Japan until June 19 and owners and trainers could not come [to Hokkaido] to inspect yearlings catalogued until then. I am very happy with the gross, which is the second highest at the yearling session, and am more than happy with the clearance rate of 92%. I would like to express my sincere thanks to owners and trainers who supported the market.”

The JRHA Select Sale concludes on Tuesday with a single session of 238 foals.