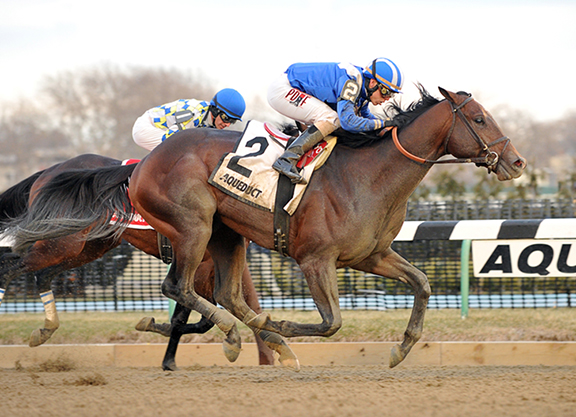 Last week belonged to 'TDN Rising Star' Shagaf (Bernardini), who won his stakes debut in the GIII Gotham S. at Aqueduct, putting trainer Chad Brown in the thick of things on the road to Churchill Downs. Who will grab the headlines this weekend? The list is numerous as the GII San Felipe S. at Santa Anita and the

GII Tampa Bay Derby at Tampa Bay Downs highlight Saturday's racing. Four members of the TDN's Top 12 will be in action in those races.

He might have cost $2.2 million at Keeneland, but it appears that Mohaymen was worth every penny and much more. Back when the Shadwell team bought the then yearling at Keeneland September 2014, here is what Shadwell Vice President and General Manager Rick Nichols had to say to the TDN, “That was a little bit more than I thought we'd have to give. Sheikh Hamdan will come soon, and look through the yearlings and he'll decide where he'll run. I'd say more than likely, we'll leave him over here.” Of the appeal of a hot commodity in sire Tapit, Nichols said, “He's the best sire in the country. You've got to pay attention to him,” adding that if his new purchase wins a Grade I, “He'll definitely be a stallion.” Imagine what Mohaymen will be worth if he wins the GI Florida Derby, not to mention the GI Kentucky Derby. The showdown between Mohaymen and Nyquist (Uncle Mo) in the GI Florida Derby will no doubt decide who will be the favorite in the GI Kentucky Derby.

Nyquist is named after Detroit Red Wings forward Gustav Nyquist. But Nyquist the hockey player isn't exactly becoming a big racing fan. “Obviously, it's a lot of fun to see that he's winning and see that he won–I don't know what you call it, a tournament or a cup or a race,” Nyquist told mlive.com shortly after his namesake won the GI Breeders' Cup Juvenile. At least the native of Sweden, where Standardbred racing is much more popular than Thoroughbred racing, has said he has heard of the GI Kentucky Derby. “That's a big deal for sure,” he said. Nyquist's owner Paul Reddam is from Windsor, Ontario and, is a big Red Wings fan. The showdown between Mohaymen (Tapit) and Nyquist in the GI Florida Derby will be one of the most anticipated of the year.

That botched workout when Mor Spirit was pulled up seems like something out of the distant past, as trainer Bob Baffert said this 3-year-old is “doing great.” Mor Sprit will race next in Saturday's GII San Felipe S., which is shaping up as a tough race and a battle to see who is the leading Derby contender in California. Having drawn post three and with a lot of speed to chase, he figures to get a perfect trip in the San Felipe. Mor Spirit's owner Michael Lund Petersen is the president of the Pandora jewelry chain. He started his first horse in 2014. “I want to be involved,” Petersen told the Washington Post last year when asked about his foray into racing. “I have no experience. It's going to take a little while.”

Should Exaggerator win the GI Kentucky Derby, it will mark a rare Triple Crown success for a horse that won a 2-year-old stakes at Saratoga. Exaggerator won the GII Saratoga Special S. Horses that can win juvenile stakes at Saratoga tend to be precocious and the trend over the last 30 years or so is that early-developing horses don't win Triple Crown races. The last Saratoga Special winner to win the Derby was Swale (1983 Saratoga Special, 1984 Derby). The last horse to come out of that race to win a Triple Crown event was Union Rags (2011 Saratoga Special, 2012 Belmont). The GI Hopeful S. hasn't produced a Derby winner since Affirmed (1977 Hopeful, 1978 Derby). Affirmed is also the last Derby winner to come out of Saratoga's other 2-year-old stakes for males, the GIII Sanford S. Afleet Alex won the 2004 Hopeful and Sanford before winning the 2005 GI Preakness and GI Belmont S. After running second in the seven-furlong GII San Vicente S., Exaggerator will be expected to show improvement in the two-turn GII San Felipe S. Saturday.

The Winchell family came close to owning not only Gun Runner, but Derby favorite Mohaymen (Tapit). Ron Winchell said that he was among the underbidders for the undefeated grey at the 2014 Keeneland September Sale. Partnering with bloodstock agent Alex Solis Jr., Winchell made a $2.1-million bid only to bow out after the Shadwell team bid $2.2 million. “At the time, we didn't know who we were bidding against,” Winchell said. “Now that I know it was the Shadwell people, I realize there is no chance we were going to get him.” Winchell raced Mohaymen's sire Tapit, so he has a rooting interest in the Derby favorite. “A win by Mohaymen would be fantastic, second best to Gun Runner winning,” he said. The Winchells have never won the Derby, but have won the GI Kentucky Oaks twice, with Untapable (Tapit) in 2014 and with Summerly (Summer Squall) in 2005.

'TDN Rising Star' Shagaf came into last Saturday's GIII Gotham S. as an untested but promising colt and left with a significant win to his credit, one that proved a lot. He'll have to face better horses than he met in the Gotham, but it was far from a bad field and he handled the assignment just fine, winning by 1 1/4 lengths. The only knock may be that he drifted out in the stretch. There could be a lot of reasons for that, but some of them could be cause for concern. Nonetheless, along with Mohaymen (Tapit), he gives Shadwell a potent pair aiming for the GI Kentucky Derby.

After also considering the GI Wood Memorial S., trainer Dominick Schettino has confirmed that Greenpointcrusader will start next in the GII Louisiana Derby. Schettino also said John Velazquez would be aboard in that contest. Though his horse ran well when second behind Mohaymen (Tapit) in the GII Holy Bull S., Schettino believes that when Greenpointcrusader went to the lead that took him out of his game. “The way that race came up, it went against his preferred style,” Schettino said. “He likes to sit and make one run.” With that in mind, Schettino has tended to give his colt slow breezes in the mornings. “He'll go in 1:02, with the last quarter in :23 and 2,” he said. “Right now, he's continuing to grow and develop and we're very happy with his training pattern.”

Brody's Cause will make his long-awaited 3-year-old debut in Saturday's GII Tampa Bay Derby, where he'll no doubt be the favorite for trainer Dale Romans. The race has a ton of speed in it, which should suit the late-running son of Giant's Causeway perfectly. With a :58 3/5 bullet work to his credit at Gulfstream, he seems primed to run at his best or close to it. One knock is that he's not the fastest horse in the race, according to the Beyer numbers, albeit his figures are during his 2-year-old year, but his top is an 88. Five horses in the race have run as fast or faster. The plus is he is the class of the field, having won a Grade I race in the GI Breeders' Futurity last year at Keeneland.

A lot has been made about there being a bias on the day of the GII Risen Star S. at the Fair Grounds and those who are looking at that race through the prism of a golden rail appear to be right. There were nine dirt races on the card and only one was won by a horse who did not race on or near the inside for most of the trip. As for Mo Tom and Risen Star winner Gun Runner (Candy Ride {Arg}), both raced on the inside for much of the race. A fairer track in the GII Louisiana Derby should help sort out the group campaigning in Louisiana for the GI Kentucky Derby.

Trainer Bob Baffert has yet to pick out a race for this promising 'TDN Rising Star', who romped in a Feb. 28 allowance, just his second career start. As the horse is lightly raced and didn't have that all-important start as a 2-year-old, time could be running short. Perhaps the connections might want to point instead for the GI Preakness S. or even the race Baffert owns, the GI William Hill Haskell Invitational S.? Too much too soon could backfire, but with a horse with this much talent, there's no doubt the temptation to have him ready for the GI Kentucky Derby must be strong.

'TDN Rising Star' Zulu worked a furlong in :10 1/5 prior to last year's Fasig-Tipton Florida Sale of 2-year-olds, among the reasons the ownership team of Stonestreet Stable and Coolmore purchased the colt for $900,000. It was tied for the second-highest price paid for a horse at the sale. Here's what Stonestreet's John Moynihan told the TDN after the purchase, “They [Coolmore] liked the horse and we liked the horse, so we decided to team up. I thought he worked fabulous. He is a horse that is immature. He's going to run two turns and he went :10 1/5 as easy as a horse can do it. We are excited about him.”

The GII San Felipe S. will be a huge test for the California-bred, who has been beating up on horses bred in the Golden State and is undefeated in six career starts. Really, no one knows how good he is. There is a ton of speed in the race and all of it has drawn inside of him, so he's not going to get the loose-on-the-lead trip he got when winning the Cal Cup Derby. But with a tougher trip than he faced that day, he could prove even more if he were to beat this tough group of open-company stakes horses.

Cherry Wine (Paddy O'Prado): A lot of upside to this 'TDN Rising Star'. Don't count him out.

Collected (City Zip): Baffert looking at revamped Sunland Park Festival of Racing S. for this one, but no Derby points will be awarded in the new race that replaces the GIII Sunland Park Derby.

Destin (Giant's Causeway): Didn't appear to beat much in the GIII Sam F. Davis S., but can jump way up if winning the

GII Tampa Bay Derby. Odd to see John Velazquez get off this one to ride other Pletcher-trainee Outwork (Uncle Mo).

Economic Model (Flatter): Has raced just twice but showed some promise when second in GII Swale S.. Can jump into Top 12 with win in Tampa Bay Derby.

Flexibility (Bluegrass Cat): Trainer Chad Brown says this one might go next in the GI Wood Memorial, where he'd be up against a formidable foe in stablemate and 'TDN Rising Star' Shagaf (Bernardini)

Frank Conversation (Quality Road): May need to pick up points in G2 UAE Derby to be able to get in to GI Kentucky Derby. Is he just a synthetic-track lover?

Forevamo (Uncle Mo): Did a rail bias help this one in GII Risen Star S.?

Ralis (Square Eddie): Winner of GI Hopeful S. resurfaces with news that he will make his 3-year-old debut in GII Rebel S.

Sunny Ridge (Holy Bull): Though fourth in the GIII GothamS., he ran 38 feet farther than the winner did, according to the Trakus chart and actually ran faster at 36.5 miles per hour. Winner Shagaf (Bernardini) clocked 36.4 mph.

Click here to visit the Derby Top 12 section of our website, complete with video past performances, Equibase Pps, and Thoro-Graph sheets.