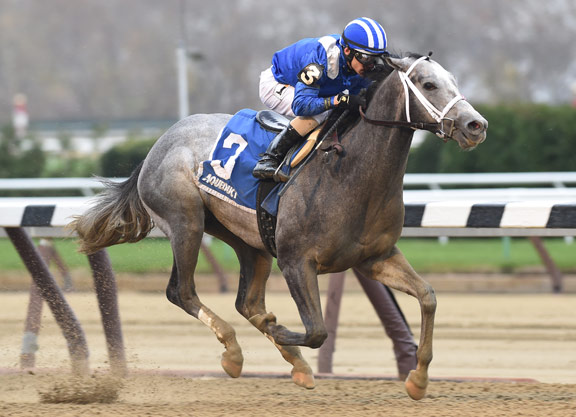 According to good old Wikipedia, a shaman is “a person regarded as having access to, and influence in, the world of good and evil spirits…Typically such people enter a trance state during a ritual, and practise divination…”

Wiki also says the noun derives, by a complicated route, from a word meaning “fatigue, weariness, exhaustion, labor, toil, etc.” In which case I am well qualified to have a go at a bit of forecasting the future: I am approaching a trance-like state following a very demanding schedule over the last few months. My prediction is that Tapit’s son Mohaymen, winner of the GII Remsen S., is a colt with a very bright future.

Let’s look at the omens. For a start, there is the record of other recent Remsen S. winners. Six of the last 10 have gone on to become GI winners, thanks to Honor Code, Overanalyze, To Honor And Serve, Court Vision, Nobiz Like Shobiz and Bluegrass Cat. Their collective achievements include victories in the Metropolitan H., Whitney S., Arkansas Derby, Cigar Mile, Woodward S., Hollywood Derby, Breeders’ Cup Mile, Wood Memorial and Haskell Invitational. And that’s not all. As I’ve pointed out in the past, Aqueduct’s nine-furlong contest fell to five future Kentucky Derby winners in the second half of the 20th century, in the shapes of Carry Back, Northern Dancer, Pleasant Colony, Go For Gin and Thunder Gulch.

Then there’s the record of other Tapit colts in the Remsen. Last year Frosted failed by only half a length to wear down Leave The Light On (but finished six lengths clear of dragon-slayer Keen Ice). Of course Frosted has gone on to win the GI Wood Memorial and to finish fourth in the GI Kentucky Derby and second in the GI Belmont S. In the 2012 Remsen another of Tapit’s sons, Normandy Invasion, went down by just a nose to Overanalyze. He too was destined to run well in the Wood Memorial (a good second to Verrazano) and the Kentucky Derby (fourth to Orb after leading inside the final quarter).

Of course Tapit also contested the Wood Memorial back in 2004 and he won it, to make amends for losing his unbeaten record in the Florida Derby just four weeks earlier. Unfortunately, he had suffered from a significant lung infection after the Florida Derby. The situation was complicated by the fact that Tapit needed more graded stakes earnings to ensure his place in the Derby field and the story goes that Tapit’s trainer Michael Dickinson hoped his colt would come “late and easy” to take the $75,000 third prize. Instead, Tapit exceeded expectations, landing the $450,000 first prize.

“What Dickinson feared going into the Wood,” The Blood-Horse reported, “was that Tapit, being such a generous and competitive horse, would try too hard and give more than what was expected of him.”

Dickinson once told me that he believes that rushing Tapit back from illness to contest the Wood Memorial effectively “bottomed” the son of Pulpit. The end result was that Tapit finished only ninth when third favourite for the Kentucky Derby. A four-month break failed to revitalise him and a disappointing display in the GII Pennsylvania Derby prompted his retirement.

Of course Tapit was a hit virtually from the word go and he has reached the significant benchmark of 5% graded winners in his first eight crops. He is already responsible for 16 Grade I winners in the major racing countries, including the admirably versatile and talented Tonalist. This 4-year-old recently carried top weight to victory in the Cigar Mile H., to increase his tally of Grade I successes to four, following his wins in the Belmont S. and in two editions of the Jockey Club Gold Cup.

Mohaymen comes from the first of Tapit’s six-figure crops, sired at $125,000 in 2012. This crop has also produced another recent stakes winner in Rafting, plus Just Wicked (GII Adirondack S.), Tin Type Gal (GIII Miss Grillo S. on turf), Hollywood Don (a listed winner on turf before taking third place behind Nyquist in the GI Breeders’ Cup Juvenile), Tap To It (a ‘TDN Rising Star’ who was second to Rachel’s Valentina in the GI Spinaway S.) and Time And Motion (Grade III-placed on turf).

This crop also includes Royal Obsession, who achieved ‘TDN Rising Star’ status two days ago, as well as three other Rising Stars in Inheritance, Maquette (in France) and Southern Girl. Altogether Tapit has had 25 winners from 55 starters and ranks third behind Uncle Mo and Scat Daddy among the sires of juveniles.

With 16 graded winners, including five Grade I scorers, Tapit already has his second sires’ championship wrapped up, with his year’s earnings of over $18 million already constituting a record. Mohaymen’s contribution stands at $345,000, from three victories from as many starts, but he still has a long way to go before he repays his purchase price of $2.2 million. This made him the joint-top yearling at Keeneland’s September Sale with a War Front colt which is now the Group 2-placed Air Vice Marshal.

Mohaymen, no doubt, owed his popularity at the sales partly to his being a half-brother to New Year’s Day, the Street Cry colt who cut down Havana close to home to take the 2013 Breeders’ Cup Juvenile. Sadly, New Year’s Day sustained a non-displaced chip on his left-hind sesamoid before the end of 2013 and was retired to Hill ‘n’ Dale Farms after only three starts. He had still done enough to top the Experimental Free H. (but not to earn the Eclipse Award, which went to Shared Belief).

It isn’t too surprising that Mohaymen’s dam Justwhistledixie should make such an excellent start to her broodmare career, as this female line has produced numerous good winners, including juveniles. Mohaymen’s fourth dam Tiy also ranks as the third dam of Shared Account (2010 Breeders’ Cup Filly and Mare Turf). Mohaymen’s sixth dam Bold Irish is also the fifth dam of Epitome, winner of the 1987 Breeders’ Cup Juvenile Fillies. This Bold Irish family has also produced winners of the Kentucky Derby (Fusaichi Pegasus) and Preakness (Pine Bluff).

Justwhistledixie stayed well enough to win the GII Bonnie Miss S. over a mile and an eighth in the March of her second season, and Mohaymen seems likely to stay a mile and a quarter next year. Unfortunately, the young brother to New Year’s Day died this year, but Justwhistledixie was returned to Tapit.

Mohaymen’s broodmare sire Dixie Union impressed at two, showing admirable precocity and speed in winning four of his first five starts. He then added a new dimension to his record when he won the GI Haskell Invitational over a mile and an eighth, but his speed was again apparent when he also took the GI Malibu S. over seven furlongs. Dixie Union’s finest achievement as a stallion was the GI Belmont S. winner Union Rags and he is now beginning to shape up as a broodmare sire, another of his daughters being the dam of Besharah, one of Britain’s fastest 2015 juvenile fillies.

Rating: B+. Click for the eNicks report & 5-cross pedigree.

Click for the Equibase.com chart, the TJCIS PPs or the free Equineline.com catalogue-style pedigree. VIDEO, sponsored by Fasig-Tipton.