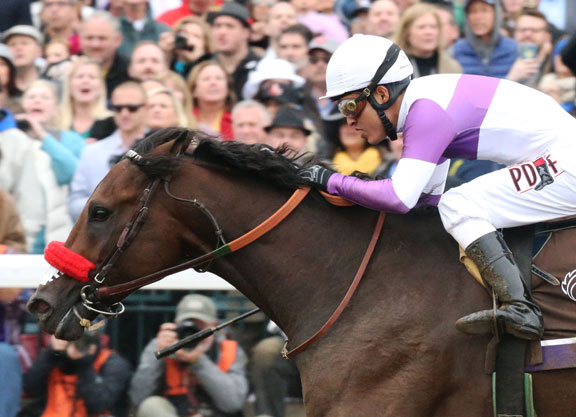 Of course everybody knows that the Breeders’ Cup Juvenile has been a pretty disastrous guide to the Kentucky Derby, with Street Sense being the only one of the first 31 winners to have gone on to success on the first Saturday in May.

But has the race fared any better as a guide to stallion success? The answer, you’d think, would be yes, as we are talking about an industry which prizes precocity and speed and the Juvenile usually decides the 2-year-old championship.

In fact no fewer than 23 of the first 31 winners went on to secure the Eclipse Award, the only interlopers being Forty Niner, Easy Goer, Dehere, Maria’s Mon, Declan’s Moon, Lookin At Lucky, Shared Belief and American Pharoah (whatever happened to him?).

The unfortunate truth is that there have arguably been more duds than success stories, though the picture has been clouded by some early deaths and some exports. There have also been surprising few instances of a Breeders’ Cup Juvenile winner siring a Juvenile winner. The first to do so was Seattle Slew’s son Capote, the 1986 winner who was responsible for Boston Harbor, the 1996 hero who was exported to Japan in 2001.

Next came Unbridled’s Song, who narrowly got the better of Hennessy in the 1995 Juvenile at Belmont Park. Needless to say, Unbridled’s Song went on to become a major force as a stallion and enjoyed plenty of Breeders’ Cup success, most recently with Friday’s highly impressive Dirt Mile winner Liam’s Map. Prior to that, the Taylor Made stallion had been responsible for the Distaff winners Unbridled Elaine and Unrivaled Belle and the 2008 Juvenile winner Midshipman.

Incidentally Hennessy, the Storm Cat colt who gave Unbridled’s Song such a good battle at Belmont, also sired a Juvenile winner in the extraordinary Johannesburg.

This Irish-trained colt was becoming a G1 winner in a fourth different country when he won in 2001. Despite siring a remarkable 10 graded/group winners in his first crop, Johannesburg’s eventual fall from grace was such that he became another export to Japan. Fortunately one of his first-crop graded winners was Scat Daddy, who has had such a brilliant time with his 2015 two-year-olds, with six graded winners among his eight stakes winners.

Despite the scale of his success, Scat Daddy has now lost his lead on the 2-Year-Old Sires’ table to Uncle Mo, an impressive winner of the 2010 Juvenile. Uncle Mo leap-frogged his fellow Ashford Stud stallion by becoming the third Juvenile winner to sire a Juvenile winner, with the help of Nyquist, who triumphed in what had appeared to be a very competitive edition.

It took Uncle Mo’s two predecessors quite some time to come up with their Juvenile winner. Capote was 12 when Boston Harbor won and Unbridled’s Song was 15 when Midshipman followed in his footsteps. Uncle Mo, on the other hand, is still only seven, and there are solid reasons for hoping that he is going to develop into one of the best stallions with a Breeders’ Cup Juvenile victory on his résumé.

For a start, he was a highly talented individual, as was recognised by the official handicappers. Uncle Mo topped the Experimental Free Handicap by the sizeable margin of 5lb, and his figure of 128 had been matched only once in the years since the dazzling Arazi was awarded 130 in 1991.

In case you’ve forgotten, Uncle Mo’s high weight reflected an unbeaten sequence of three impressive wins. After cruising home more than 14 lengths clear in Saratoga maiden special weight race, he had nearly five lengths to spare in the GI Champagne S. and then rounded off his year with his clear-cut Juvenile success.

With a background like this, Uncle Mo seemed guaranteed to make a fast start as a stallion and he has done exactly that. Of course we mustn’t forget that–with 165 juveniles, sired at $35,000–he has far more ammunition than the vast majority of the other first-crop sires. That said, he has outclassed his opponents on the score of prize-money ($3 million and counting), stakes winners (six) and graded winners (three).

He enjoyed a spate of successes towards the end of last week. In addition to Nyquist’s triumph, there were very decisive maiden special weight victories for Mokat at Del Mar, Conquest Babayaga at Woodbine and Name Changer at Parx. Also, Mo Tom and Uncle Brennie finished first and third in the Street Sense S. at Churchill Downs.

“The Uncle Mo babies are running all over the place and I don’t think you could ask for a better start for your freshman season. I think two turns is definitely within his capability. He’s got this big long cruising stride to him and I have always thought that the further he would go, the better he would get.”

It seems that the Darley team are also impressed with Uncle Mo’s achievements so far, judging by yesterday’s announcement that Nyquist will be joining the Jonabell team on completion of his racing career.

They have every right to be impressed. Nyquist’s record stands at a perfect five for five, and he is now a triple GI winner following his Californian successes in the Del Mar Futurity and the FrontRunner S. Then there’s Gomo, whose GI victory in the Alcibiades S. was gained by nearly three lengths from Dothraki Queen, a respectable third in the GI Breeders’ Cup Juvenile Fillies (in which Uncle Mo’s Miss Grillo S. runner-up Thrilled faded to the rear). We have also seen Uncle Vinny win the GIII Sanford S. at Saratoga, with Forevamo and the turf winner Uncle Brennie completing the sextet of stakes winners.

It is going to be fascinating to see how Uncle Mo’s progeny develop as sophomores. Unfortunately, Uncle Mo missed the Triple Crown races and then issued mixed messages on his return. It was by only a nose that he failed to hold off Caleb’s Posse in the GI King’s Bishop S. over seven furlongs and he then led throughout in the GII Kelso H., in the process earning an impressive 118 Beyer. Uncle Mo then attempted to round off his career with victory in the Breeders’ Cup Classic, but faded to finish 10th of 12. Despite that failure in the Classic, he was officially rated joint-second with Animal Kingdom and Shackleford among the American three-year-olds on the World Thoroughbred Rankings.

Uncle Mo’s trainer Todd Pletcher had expressed confidence at a press conference that the son of Indian Charlie would stay the Classic distance:

“The way this horse trains, the way he galloped this morning, if he gets into a rhythm– he has got tremendous stride, great rhythm–if he can get into that rhythm and goes at a steady beat, I think he stays a mile and quarter.”

Uncle Mo’s performance suggested otherwise. However, his sire Indian Charlie won the Santa Anita Derby and was third in the Kentucky Derby, whereas his broodmare sire, Arch, won the Super Derby over a mile and a quarter and sired the GI Breeders’ Cup Classic winner Blame. Uncle Mo would therefore need just a little help from his mares to sire Triple Crown contenders.

Did he receive such help in siring Nyquist? Possibly not. His broodmare sire, Forestry did his winning at up to 1 1/16 miles, notably taking the GI King’s Bishop S. over seven furlongs. Forestry went on to sire winners of the Carter H., Cigar Mile and the Metropolitan H., but that Met Mile winner was Shackleford, winner of the 2011 Preakness. Nyquist’s dam, Seeking Gabrielle, was a sprint winner but his second dam, the GII two-year-old winner Seeking Regina, was by Seeking the Gold, a Super Derby winner who was also second in the Travers and Breeders’ Cup Classic. When Seeking Regina was mated to Forestry’s sire Storm Cat, the outcome was Seeking the Sky. This winner of the GIII Interborough H. over six furlongs went on to produce Sahara Sky, another winner of the Met Mile, to Pleasant Tap.

So, until we know more about Nyquist, I would hold fire on backing him to become the second Juvenile winner to win the Kentucky Derby.