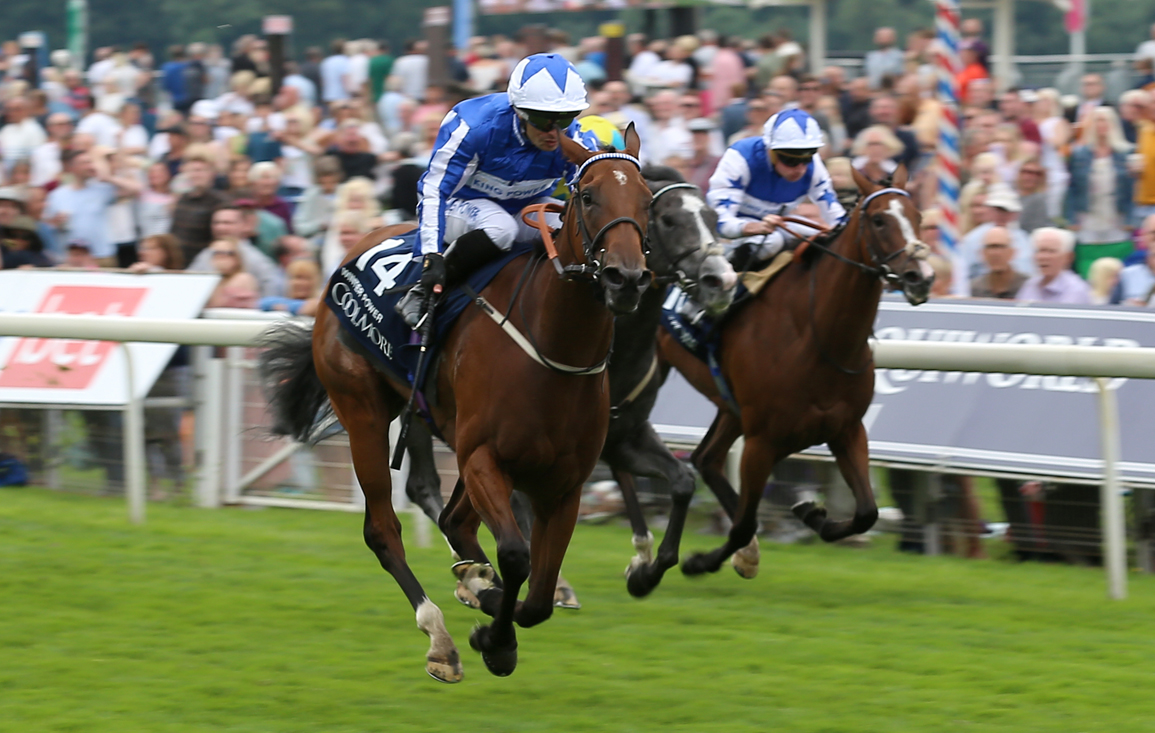 Friday's G1 Coolmore Wootton Bassett Nunthorpe S. was always going to be about raw speed and the 3-year-old filly Winter Power (Ire) (Bungle Inthejungle {GB}) qualified more than most in that regard having displayed it in abundance in the May 13 Listed Westow S. and July 10 Listed City Walls S. over this flat York five. In front of all bar the furiously-fast Golden Pal (Uncle Mo) until the two-furlong pole, King Power's 9-1 shot left that US raider for dead there and hit the line under Silvestre de Sousa with 1 1/4 lengths to spare over the generously-priced fellow Northern-trained Emaraaty Ana (GB) (Shamardal). Dragon Symbol (GB) (Cable Bay {Ire}) stayed on to place yet again at this level, half a length away as the 9-4 favourite Suesa (Ire) (Night of Thunder {Ire}) found it all happening a touch too fast 3/4 of a length further back in fourth. “She's a wonderful filly,” commented trainer Tim Easterby of the famous clan renowned for decades in this Yorkshire area. “The best ones have that kick, that bit extra and she has it. She doesn't take any training, she just lobs around at the back of the string and has done so well and thrived late summer. This spring, she was looking a bit light and backward but she's put on so much weight and looks tremendous now. She has relaxed and got great confidence in herself.”

The Easterbys are part of the fabric in these parts, with Tim's Habton Grange Stables in Malton built up by his father Peter whose most high-profile horse was the York legend Sea Pigeon who defied top weight of 10 stones to land this meeting's feature Ebor H. in 1979. While his colourful uncle Mick enjoyed glory in this in 1976 with Lochnager (GB), the current licence-holder at Habton Grange had yet to collect in the race that means so much to the family with the filly Pipalong (Ire) (Pips Pride {GB}) third to Nuclear Debate (Geiger Counter) in the millennium edition. By the time Winter Power was having her eighth 2-year-old start in the Listed Harry Rosebery S. at Ayr in September, she was boasting just two wins in a nursery and novice at Redcar and Ripon but it was then that she took off with a black-type breakthrough before storming to a three-length success in Newmarket's G3 Cornwallis S. the following month.

Winter Power's dynamic displays in the Westow and City Walls here this term came either side of a ninth when setting off too fast in the G1 King's Stand S. at Royal Ascot June 15, but this was a contrasting display of ideally-measured speed over Britain's minimum trip. Coming up the centre on her own as the fellow Northern-based Liberty Beach (GB) (Cable Bay {Ire}) kept Golden Pal honest away to her left, the bay was always way beyond the reach of Suesa who was on the fastest ground she had encountered and almost every rival was under the pump after as little as two furlongs. Dragon Symbol was one of them, but he has shown on more than one occasion that he never gives up the chase and he was only robbed of another silver medal late on by the 40-1 shot Emaraaty Ana who has been revived by a Hamilton conditions win at the end of last month. “She's unbelievably fast and when she hits the gates right she's really good,” Silvestre de Sousa said. “She did that here first time this year and I thought I hadn't sat on anything as fast as her.”

“She showed a fantastic turn of foot in the Cornwallis last year and she's just got something special,” Easterby said. “There is no scientific reason why I feel she'll get better, but it's in the way she's developed so much. She is switched off in her brain and chilled out–she gets down to it with no issues. At Ascot, she just went a crazy pace and it's no use doing it all in the first part of the race. She's in the [Oct. 3 G1 Prix de l'] Abbaye [at ParisLongchamp] and I'll speak to [King Power racing manager] Alastair [Donald] and the team and see what they want to do now. She'll need a bit of time after a group 1 race like that, even though she's won nicely. I wouldn't want to get her caught up in the logistical problems that are involved with travelling at this time, so I'm not sure about the Breeders' Cup.”

Emaraaty Ana's trainer Kevin Ryan said of the runner-up, who took the 2018 G2 Gimcrack S. at this meeting, “The Hamilton race gave him confidence. Passing the two-pole I knew they'd gone hard and it was a question of if they could keep it up as I knew he'd stay on strong. Fair do's to the winner, she's incredible. She probably hit a brick wall, but it was too close to the line for us. Ours is a very good horse. This fellow is as good as I've had. He's probably a better six-furlong horse, we've run him over five to get him to relax but it leaves the rest of the season open. He's probably a bit ground-dependent and needs it quick, he's in the Abbaye which might suit but he's also in at Haydock [in the Sept. 4 G1 Sprint Cup] and Champions Day which could come up as bogs so we'll see. He's only young, he'll get better.”

Wesley Ward was unable to shake the Nunthorpe hoodoo and said of Golden Pal, who faded to be seventh, “Frankie said he was waiting for the turn. I made no secret of it that I was very confident coming into the race, but the winner ran a tremendous race and we're disappointed. I think so highly of this colt of course I'm disappointed, it just wasn't his day. I still think he's a tremendous racehorse. We'll see if any answers come up when we get him back and see what we find. From everything I've seen of this colt, he's just awesome so when he runs a race like today it's a head scratcher. We'll see what transpires, I haven't lost faith in him.”