Workouts Canceled at Santa Anita Tuesday Due to Air Quality 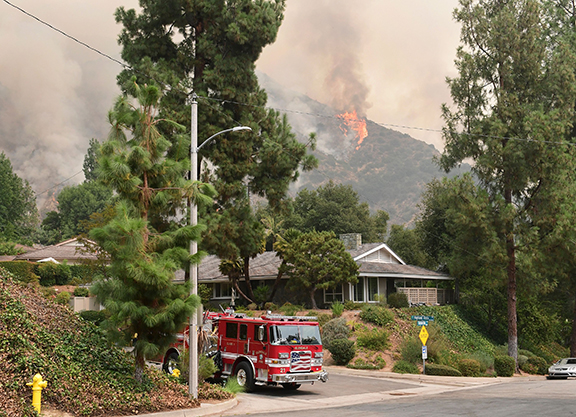 The Bobcat Fire burns on hillsides behind homes in Arcadia, California | Getty Images

Santa Anita management sent a text to trainers Tuesday morning advising them that workouts would be canceled because of the air quality.

“The AQI is at 159 this morning. We are going to cancel workouts and only allow gallopers and joggers,” the text said.

In conjunction with Dr. Rick Arthur, the Equine Medical Director at UC Davis, where he is assigned full time to the California Horse Racing Board, the Stronach Group has a policy that any air quality index about 150 could be unhealthy for horses, and that exercise should be limited on those days.

“Starting at 100 AQI, we start to watch the facility daily and that's our first level of observation,” said Dionne Benson, TSG's Chief Veterinary Officer. “At 150, we consider limiting training to jogging and gallops only, just to decrease the amount of air horses are taking into their lungs. At 175, we'll recommend cancelling live racing, workouts, and prohibiting galloping or breezing. We would still consider having them jog or walk on the track to balance the risks of having them in their stalls for days at a time.” Benson said that the AQI reached 180 last Friday and Saturday when racing was canceled at Golden Gate.

Santa Anita is being affected by the Bobcat Fire, which is burning just north of the track in the Angeles National Forest. As of Tuesday night, the fire had burned over 41,000 acres and was only three percent contained. Over 1,000 fire personnel are currently assigned to the fire, which is burning downhill toward the foothill communities near Arcadia. The spread has prompted mandatory evacuations for residents of several communities living along the foothills of the San Gabriel Mountains which provide the backdrop for Santa Anita.

The cancellation marks the third time that workouts have been canceled, allowing only joggers and gallopers, after works were canceled last Monday and Tuesday in the early stages of the fire. The winds then shifted, allowing a return to workouts until Tuesday morning. Typical wind patterns in the area of the track see the air quality at its worst in the morning, and improving during the day.

The smoke is distinctly visible in the air on the daily workouts shown on XBTV.

The Red Cross opened an evacuation center at Santa Anita last week, but closed it when it appeared the danger had passed. They reopened it Sunday afternoon.

Late in the day Tuesday, Santa Anita issued revised training guidelines, allowing trainers to make their own decisions about workouts if the air quality index is from 150-155; from 156-175, allowing only joggers and gallopers, and cancelling training and racing at 176 and higher. 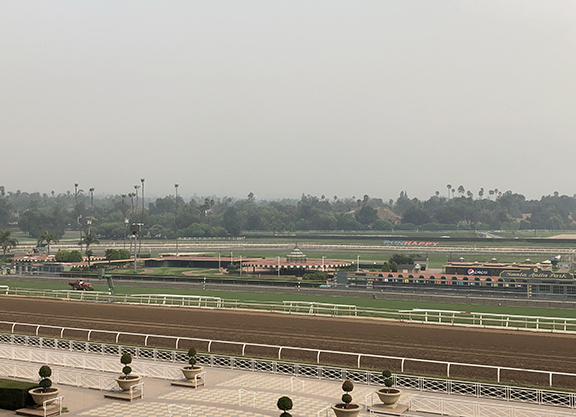 The San Gabriel Mountains are invisible from the Santa Anita grandstand Tuesday, September 15 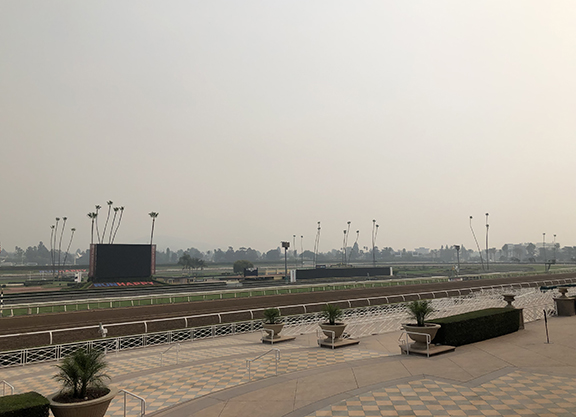