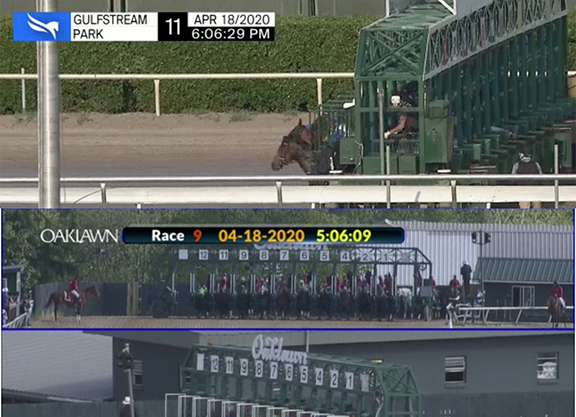 Under normal circumstances, with many tracks running on a busy Saturday afternoon, it's not uncommon to see races at different venues go off on top of each other. The occurrence usually leads to a flurry of frustrated tweets, with bettors, fans and even racing participants wondering why the issue can't be remedied–it seems like it should be an easy fix. Last Saturday, the convergence of post times reached a new level of irrationality.

With the Tampa Bay Downs card already in the books, just two Thoroughbred-only tracks were holding races–Gulfstream Park and Oaklawn Park, but they ran races on top of each other.

Oaklawn's ninth race was set to go off at 5:45 p.m. ET, but they sprung the latch in Hot Springs at approximately 6:06:09 (Oaklawn is in the central time zone). Gulfstream's 11th race, with a published post time of 5:57 p.m. ET, was off at 6:06.29. Gulfstream's race was a furlong shorter, meaning the winners of their respective races crossed the wire approximately eight seconds apart.

TVG, whose signal has been picked up by NBC Sports during a time in which racing has garnered increased exposure due to the COVID-19 pandemic, was forced to show one race live and the other on tape delay. Those who bet both races and were watching through an ADW were forced to try to watch both at one. Those who cashed a winning wager on either race did not then have the opportunity to put those funds directly back into the pools on another race, say, five or 10 minutes later.

“Equibase has a schedule which everyone sends in their post times for,” Gulfstream's Vice President of racing Mike Lakow said Wednesday. “Our post time for that race was supposed to be 6:03, and we sent that out four, five, six days prior. Oaklawn's post time was 5:45… We went off at 6:06–we were three minutes late–they went off at 6:06 and they were 21 minutes late.”

Lakow noted that Gulfstream, which is known for implementing post-time drag, provides its actual expected off times to Equibase rather than just its published post times. He also said that he has been in occasional contact with mutuel department and racing office officials at Oaklawn in response to past instances of post time overlap.

Lakow said he did not know what caused Oaklawn's delay Saturday, but added, “Things happen–horses get loose; there are issues in the paddock; issues taking races off the turf; a tractor stalls on the track. We're trying to do our best, but again, we were three minutes off our post and they were 21 minutes off their post that day.”

Lakow said he recently requested a list of off times from Equibase for the month of April to analyze examples of overlap, of which he says there have been approximately five during a much quieter month than usual.

“All directors of mutuels watch the races,” Lakow said when asked if the tracks maintained a line of communication mid-card. “They're all watching TVG or they have [other track feeds] on. They're watching–there's no doubt about it. And every track will say the same thing, 'Well, if Oaklawn takes 15, are we supposed to keep moving off our schedule?' We have a schedule, and we're handling twice as much money as Oaklawn. If anything, Oaklawn should stay off of us–not creep up on us.”

While a more detailed explanation was not provided by Oaklawn by the deadline for this story, a spokesperson for the track said it had been working with Equibase to avoid running on top of other tracks. The Arkansas oval operated about one to three minutes later than scheduled through its first five races, and was about five minutes late by its sixth race. It was running about seven minutes late by race seven, which featured an inquiry. Race eight, the GIII Count Fleet Sprint H., was off 14 minutes late.