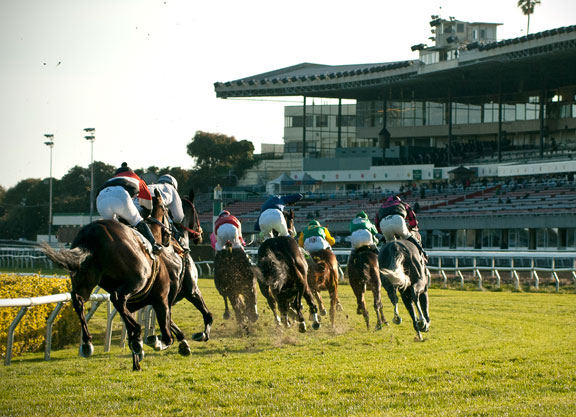 While racing this week at Santa Anita has been canceled due to the fires that are ravaging the West, its sister track, Golden Gate Fields, will be back in business starting Thursday. Golden Gate Vice President and General Manager David Duggan said the area surrounding the track has undergone a dramatic transformation, with clear blue skies having replaced the orange glow that had surrounded the Bay Area earlier.

Golden Gate was forced to cancel its three weekend cards last week and as not raced since Sept. 7.

“Last Thursday, you couldn't make it up. It was truly bizarre,” he said. “At 9:30 in the morning we had lights on on the track because you could not see in front of you. Visibility was down to about 10 meters.”

Duggan said that as recently as Sunday he was still convinced that racing would not be held at Golden Gate this week, but then came an abrupt change.

“You would not believe the change,” he said. “I promise you, you would not believe the change. It is absolutely beautiful here with an air quality reading of 20. It was just extraordinary. I've never seen anything like it. It's clear and the visibility is great. You can seethe city, you can see the Golden Gate Bridge. There's no hint of smoke in the air whatsoever. It's as if nothing had ever happened.

“I was frighteningly bad. We lost Friday, Saturday and Sunday and had to interrupt training. Everything that could go wrong with the air quality and the prevailing conditions went wrong. Today, if you were dropped into the place from the sky you'd say 'Why were you guys making such a big deal about this?'”

Duggan said when the effects of the fires were at their worst the Air Quality Index was about 292.

“It was extremely unhealthy around here for a while,” he said.

An AQI of 20 means the air is satisfactory and air pollution poses little or no risk.

Duggan said the change was likely the result of shifting wind patterns.

“The winds that came just blew everything away and we're back to being a beautiful bayside racetrack,” he said.