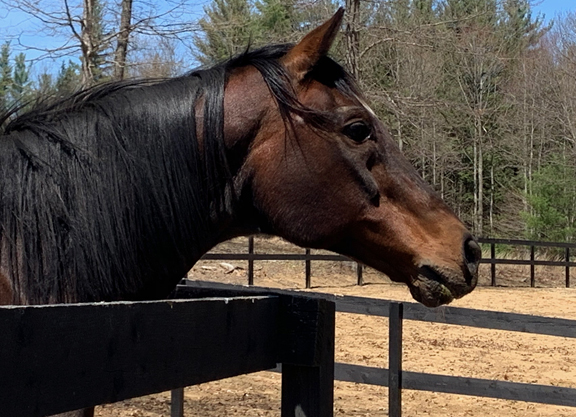 Will's Way (Easy Goer–Willamae, by Tentam), whose racing career was highlighted by a hard-fought victory in the 1996 GI Travers S., passed away Dec. 24 at Old Friends at Cabin Creek in Greenfield Center, NY. He was just over a week shy of celebrating his 28th birthday.

Campaigned by Rudlein Stable and trained by H. James Bond, Will's Way didn't begin his career until early in his sophomore season, but was a neck second to GI Preakness S. hero Louis Quatorze (Sovereign Dancer) in the GII Jim Dandy S. at Saratoga before turning the tables on that rival and Skip Away (Skip Trial) in the Midsummer Derby. Seventh to Old Friends Kentucky inmate Alphabet Soup (Cozzene) in the 1996 GI Breeders' Cup Classic, Will's Way was runner-up in the 1997 GII Suburban H. before besting Formal Gold (Black Tie Affair {Ire}) by a nose in the 1997 GI Whitney H., with Skip Away a distant third. Will's Way had a brief stud career, siring GI Cigar Mile H. hero Lion Tamer and GSW Willy O'The Valley.

“We all loved him so much,” said Joann Pepper, owner and manager of Cabin Creek. “He would take our breath away when he decided to run. I will miss brushing his tail and kissing his star–I'll even miss letting him chew on me,” Pepper added, referring to Will's sometimes cantankerous personality. “It was such an honor to care for him.”

“He was such an exciting racehorse, and we were so thrilled to have him with us first in Kentucky and then in New York,” said Old Friends founder and president Michael Blowen. “Our heart goes out to our friends at Cabin Creek. Joann and Will had a very special bond, and we know he will be sorely missed by everyone there.”