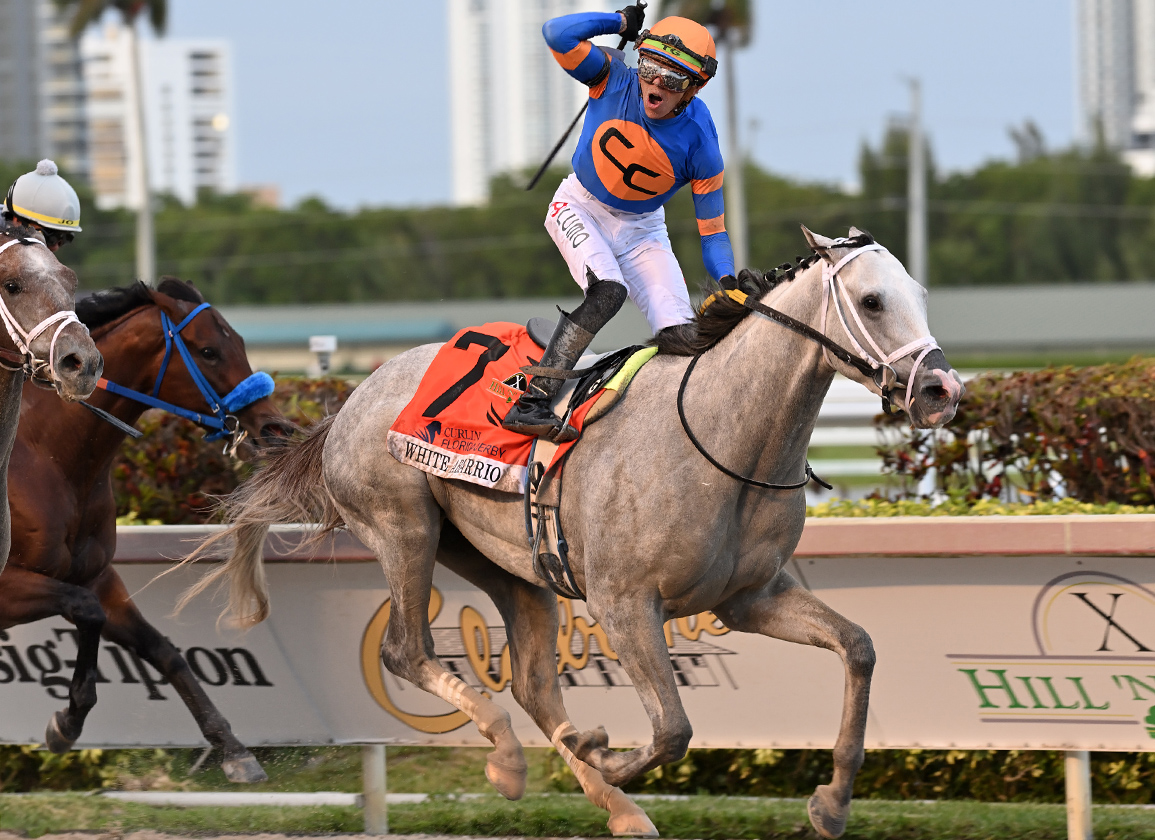 HALLANDALE BEACH, FL–With no heavy favorite, the GI Curlin Florida Derby looked like it would likely go one of four ways on paper. The three winners of the four Florida-based GI Kentucky Derby preps–Simplification (Not This Time), White Abarrio (Race Day) and Classic Causeway (Giant's Causeway)–were 2-1, 5-2 and 7-2, respectively, and 'TDN Rising Star' Charge It (Tapit), a flashy maiden winner hailing from the Todd Pletcher barn, was dispatched at 3-1.

While all four of those runners were a factor in this event, it was C2 Racing Stable's White Abarrio who punched his way to victory under a jubilant Tyler Gaffalione.

It was a beautiful day for racing at Gulfstream Park with temperatures in the mid-80s and sunny skies throughout the day as thunderstorms soaked Central Florida. The threat of those storms heading south diminished throughout the afternoon, but just as horses loaded in the gates for the grand finale, gray clouds swarmed over the Hallandale oval. Luckily, the rain held off during the 1:50.64 it took to run the nine-furlong event.

The top four betting choices were all in the mix early, but it was GII Lambholm South Tampa Bay Derby hero Classic Causeway who took control going into the first turn.

He clocked an opening quarter in :23.67 with Simplification breathing down his neck and Pappacap (Gun Runner) keeping the pressure on to that one's outside. Charge It and White Abarrio ran in tandem just behind the top three, keeping a close eye on things as the half went in :47.24. Classic Causeway called it quits just moments later and Simplification and Pappacap charged ahead, neck and neck. White Abarrio wasn't going to let them get away that easy, coasting up behind them with Charge It hot on his heels.

White Abarrio swept up outside of the leading duo entering the far turn and Luis Saez guided Charge It to confront him in the four path. Simplification showed the way into the stretch and a stubborn Pappacap finally yielded as White Abarrio swept in front of him to lock eyes with Simplification. That meeting was quite brief however, as White Abarrio charged to the front with just a furlong left to run. Simplification tried his hardest to keep up with White Abarrio, but the gray kept on rolling to win by 1 1/4 lengths. The twice-raced 8 1/2-length maiden winner Charge It proved worthy of his conditioner's confidence, greenly, but gamely running on in the final furlong to be a clear second with Simplification a length back in third. GIII Best Pal S. winner Pappacap, a 16-1 shot, held fourth and Classic Causeway faded to a disappointing last.

It was the first Florida Derby win for both trainer Saffie Jospeh and rider Gaffalione, who have worked together since the start of their careers. It was Gaffalione's fifth win on the card and Joseph is leading trainer for the winter meet.

“It means the world to me,” said Joseph, choking back tears. “The Florida Derby is up there with the Kentucky Derby because we're based at Gulfstream. I'm just thankful and blessed that we have this opportunity. It's amazing.”

He added, “Tyler, as I said, when he started, I only had like 12 horses, but I rode him on my first ever good horse, a horse named Saraguera.”

“I don't even know what to say right now,” added Gaffalione, who was all smiles from the finish line straight through the post-race presser. “I feel like I'm on cloud nine. I'm just so thankful and I feel so blessed. This is all my childhood dreams come true. To win the Florida Derby, growing up down here, it's just so amazing.”

He continued, “Like Saffie said, we've been together for the past eight years now, and we've had a lot of success. We work well together, great communication. I have a lot of confidence in him and vice versa. I just feel so blessed and thankful to be given this opportunity, especially with them.”

Earning 100 points with this win to add to the 12 he already had, White Abarrio moves into third on the Derby leaderboard and will be Joseph's first Derby starter and Gaffalione's second, following War of Will (War Front).

It was the first Grade I win for brothers Mark and Clint Cornett's C2 Racing Stable. Mark Cornett picked White Abarrio out after his flashy maiden win and they negotiated a private purchase.

A $7,500 OBSWIN yearling purchase, White Abarrio was purchased by trainer Carlos Perez for $40,000 at OBS March after breezing in :10 2/5 for Clap Embroidery. Unveiled in a 6 1/2-panel event at Gulfstream Sept. 24, he split foes and kicked clear to graduate by 6 3/4 lengths, earning an 81 Beyer Speed Figure. Privately purchased by the Cornett brothers and transferred to Saffie Joseph after that victory, White Abarrio wired a one-mile optional claimer at this oval Oct. 29, matching his debut Beyer. Shipped to Churchill Downs next out, the gray checked in third in the GII Kentucky Jockey Club S. Nov. 27 and called it a season.

“I saw him win,” Mark Cornett said. “He came out of the one-hole, which as a first-time starter going 6 1/2 furlongs is very difficult to do, and raced inside the horses down the back side. He did something young 2-year-old first-time starters don't usually do, which is split horses at the quarter pole. He actually split three horses, went through like a seasoned horse and drew off, actually did it internally into some pretty good fractions.

So he ticked all my boxes and what I look for when I buy a horse, physically, pedigree-wise. That's why we ended up and bought it. We were lucky enough to be able to work a deal with the owner, and here we are today winning the Florida Derby.”

Making his seasonal debut in Gulftream's GIII Holy Bull S. Feb. 5, he stalked and pounced his way to a 4 1/2-length score over next-out GII Fasig-Tipton Fountain of Youth S. winner Simplification. White Abarrio had spiked a fever shortly before the Holy Bull, causing him to miss two works, so his connections opted to skip the Fountain of Youth and make sure their colt was fully recovered with an eye on the Florida Derby. He spiked another fever just 12 days out from this event, but Joseph was more confident in his fitness this time around. However, he still gave the colt a three furlong blowout in :34 4/5 this past Tuesday.

The Barbados native continued, “After that, we talked it over. He ran such a big race, and we figured, if he's good enough and able to win that race, he should be good enough to give him a good chance to win in the Florida Derby. Everything went perfect from then until 12 days ago, and we had a hiccup. In the back of your mind, you're like, geez, we should have run him in the Fountain of Youth, but it worked out.”

Bred by Spendthrift Farm, White Abarrio carries the stamp of the late B. Wayne Hughes's operation top to bottom. He hails from the third and final American crop of their former stallion Race Day, who was exported to Korea in 2020, and is out of an Into Mischief mare named Catching Diamonds, who the farm purchased for $425,000 at KEESEP. White Abarrio is her first foal and she has since produced a juvenile colt named Cage Match (Gormley) and a yearling colt by the late Lord Nelson. She is expecting another foal by that stallion this term. Catching Diamonds is a half to MGSW Cool Cowboy (Kodiak Kowboy) and the dam of GSW & GISP 'TDN Rising Star' Mutasaabeq (Into Mischief).

What They're Saying at the Florida Derby…

Todd Pletcher (Charge It, second): “Super pleased with the effort. To get a real education in a race like that was very encouraging. He got a little green down the lane. He kind of drifted in behind [White Abarrio] and felt like if he could have just run straight that last 100 yards, he was going to be right there. But I thought it was a huge effort, considering everything. Overcame some adversity, took some dirt, and did a lot of things right. Just didn't quite polish it off.”

It kind of took him a little while to get his wheels going, but once he straightened away it looked like he was going to punch on. But then he drifted in, and he had to correct. The inexperience hurt him a little in the end. I think he earned enough points and showed he's good enough now. Just got to see how he comes out of it and come up with a plan.”

Antonio Sano (Simplification, third): “I'm so happy today. We made the decision to run near the front today, because [Classic Causeway] was speed and [Pappacap] all the time is behind me. [Jockey] Jose [Ortiz] and I talked this morning and we said the last three-eighths you move the horse. I'm just so happy with him. He's very good. It's very important he ran well, and comes back well.”

Mark Casse (Pappacap, fourth): “I thought he ran great. He got me excited.  I was just happy to see him show up again because of his last race, I just couldn't understand it. I thought [jockey] Edwin [Hernandez] gave him a great trip. He just got a little late. Maybe it's too far, I don't know. He showed up and gave his best. That's all I can ask.”

Brian Lynch (Classic Causeway, 11th): “[Jockey Irad Ortiz Jr.] said he thought he was traveling until about halfway down the backside and then he just sort of ran out of horse. So, we'll do a little investigating but he look sound and he said he felt good. We'll regroup.”