Cornett Brothers Back in a Big Way 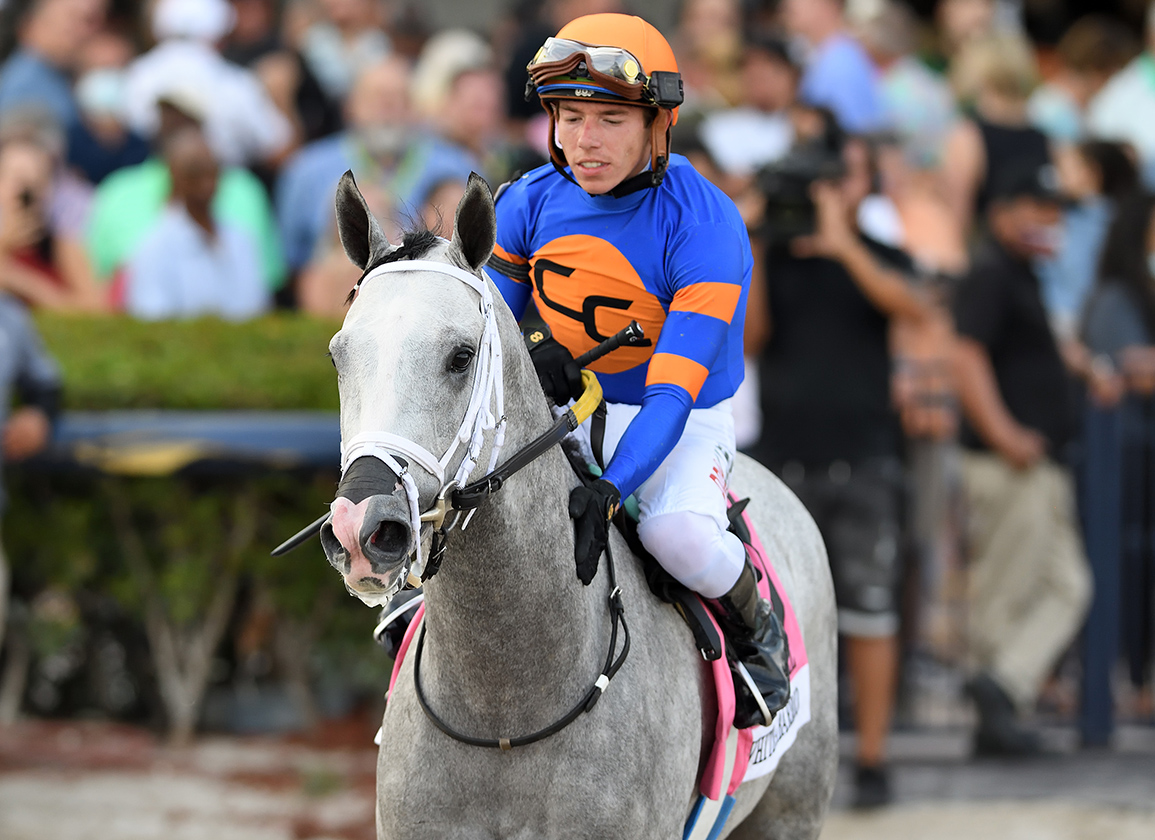 HALLANDALE BEACH, FL–While C2 Racing Stable is in its infancy, its founders, brothers Clint and Mark Cornett are not new on the racing scene. In fact, Mark Cornett has worked as a racing manager and bloodstock agent for over 25 years and even put together the partnerships that owned champions Blind Luck and Dubai Majesty. He and Clint campaigned horses a decade ago under a different banner.

The Cornett brothers returned to the game just last year under their new moniker with the goal of running in the GI Kentucky Derby. That dream could come true if their colt White Abarrio (Race Day) runs well Saturday in the GI Curlin Florida Derby at Gulfstream.

“We have actually been in racing a while,” said Texas-based Clint Cornett, who was in Hallandale Beach to attend his colt's big race, as well as Wednesday's Fasig-Tipton Gulfstream Sale. “We used to run under Turf Express in the early 2000s. In 2021, we decided to get back in the game and started C2 Racing Stable. We had been out of it since 2010.”

He continued, “I called Mark in the middle of 2021 and said let's get back in. I had a personal goal to run on the First Saturday in May and I told Mark to find us a horse. Little did I know, the second one we purchased is potentially going to be the horse.”

The Cornett brothers grew up in Texas and traveled to Louisiana to attend the races in their youth.

“Out of high school in the late eighties, we would head to Louisiana Downs from Dallas to watch the races,” Clint Cornett said. “It peaked our interest in becoming owners and we are pretty passionate about it.”

Their current stable is comprised of about 10 horses, most based at Gulfstream with Saffie Joseph, Jr. However, they do have a few at Oaklawn with Chris Hartman.

“Most of them are private purchases,” Clint Cornett said of their string. “We claim a few here and there and bought a filly [Wednesday] at the Gulfstream auction.”

“Mark identified her and we were lucky enough to get her,” Clint Cornett said. “She will go to a training facility in Ocala until about August and then come back to the track.”

White Abarrio was one of the Cornett brothers' private purchases after he opened his account with a 6 3/4-length score at Gulfstream in his Sept. 24 debut, earning an 81 Beyer Speed Figure.

“Mark was at the track and saw him break his maiden at Gulfstream,” Clint Cornett said. “He called me and said, 'I just saw this horse run and I think we need to pull the trigger on him.' We talked to the owners and we were able to put together a private purchase. Luckily they were willing to sell.”

Part of the original ownership group, La Milagrosa, stayed in for a small piece and the colt was transferred to Joseph. He wired a one-mile optional claimer at Gulfstream in his first start for C2 Racing Stable Oct. 29 and finished third next out in the GII Kentucky Jockey Club S. at Churchill Downs Nov. 27.

“He won his first start for us at Gulfstream, then we shipped him up to Churchill to run in the Jockey Club because we wanted to get him a run over that track,” Clint Cornett said. “That was his first time going two turns as well. He did not have the cleanest of trips. He got in some trouble, but we were pleased with the effort. It showed us everything we needed to know going forward.”

White Abarrio called it a season after that effort and made his sophomore debut back in Hallandale Beach in the GIII Holy Bull S. Feb. 5. Dispatched at 6-1, the gray pressed the pace early and drew off to win by 4 1/2 lengths over next-out GII Fasig-Tipton Fountain of Youth S. victor Simplification (Not This Time), who also runs back here (video).

“He ran very well in the Holy Bull,” Clint Cornett said. “You have to have some racing luck and he got a clean trip. Prior to that race, he missed two works because he got ill, so we did not know how he was going to perform. He came out of that race well, but we decided to give him a few weeks off since he had been a little sick prior to the Holy Bull. We wanted to give his body time to recover. That is one reason we skipped the Fountain of Youth, but he has been training well into the Florida Derby.”

The businessman added, “He had a slight fever about a week and a half ago for a day or two, but that broke. He did a quick little blowout on Tuesday [3f in :34 4/5]  for the race on Saturday.

Cornett said he is raring to go ahead of Saturday's big race and feels good about White Abarrio's chances.

“We feel pretty confident,” he said. “We feel he is a versatile horse with good tactile speed. We have Tyler [Gaffalione] aboard him and have all the confidence in Tyler that he will put him in a great position to be successful.”