Week in Review: Out of Nowhere, Rock Your World Emerges as Serious Derby Threat 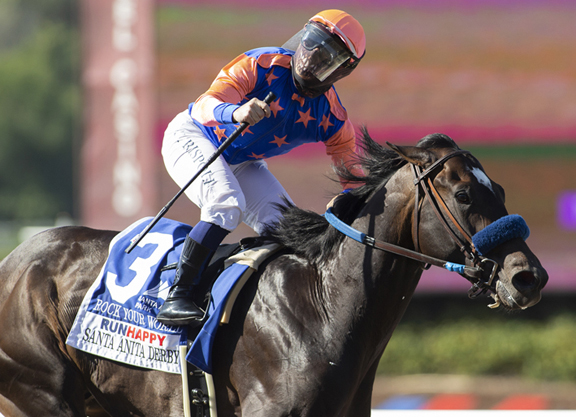 When Rock Your World (Candy Ride {Arg}) won the Pasadena S. at Santa Anita Mar. 6, it appeared that he could develop into a quality turf horse, who, like many horses trained by John Sadler, would take a while to fully develop. But Sadler had other ideas. This was going to be his GI Kentucky Derby horse.

“He had always trained well on the dirt,” Sadler said. “Sometimes you run on turf when you don't think they are training well on dirt. He was training well on dirt, but we decided the way to develop him was to start him on the grass and then switch him over. Until they have run on it you can't be 100 % confident, but it wasn't like he had never trained well on the dirt.”

It was easy to overlook Rock Your World in Saturday's GI Runhappy Santa Anita Derby. He had never run on the dirt, had never run particularly fast and was going up against a Bob Baffert-trained heavy favorite in Medina Spirit (Protonico) in a race that Baffert has dominated. He easily could have been a non-factor before returning to the grass.

Based on what we saw Saturday, Rock Your World has run in his last grass race. After setting the pace, he drew off to win by 4 1/4 lengths and earn a 100 Beyer Speed Figure. With Life Is Good (Into Mischief) on the sidelines, he is the only active 3-year-old to run a figure in the triple digits. Another plus is his running style. He led every step of the way in the Santa Anita Derby under Umberto Rispoli, but doesn't have to have the lead. It's easy to envision him sitting fourth early in the Kentucky Derby, getting the ideal trip. Then there's his breeding. A mile-and-a-quarter will not be a problem.

“What I like most about my horse is with the way he is bred, we always felt the further the better,” Sadler said. “You have Empire Maker on the dam's side and Candy Ride on the top side. I really feel with the way he moves that more distance will be good for him.”

This could be the type of breakthrough 3-year-old Sadler has been waiting for since beginning his career in 1978. While he has excelled with older dirt horses, he's never had a horse good enough to make his presence felt in the Triple Crown races. Sadler is 0-for-4 in the Derby and his best finish came with Corby, who was sixth, in 1993. It took him 17 years to get back to the Derby, and his three starters since 2010 have not finished better than 13th.

“I didn't sleep last night,” Sadler said Sunday morning. “I guess that gives you an indication of how I'm feeling about this. I feel this will be the best chance I've ever had to win the Derby and that we will go in with a good horse. I feel very good about where we are at.”

As for the rest of the field in the Santa Anita Derby, it's hard to imagine anyone but Rock Your World winning at Churchill Downs. Runner-up Medina Spirit is a consistent horse, but his three second-place finishes this year indicate that he is a cut below the very best in the division. Third-place finisher Dream Shake (Twirling Candy) obviously has some talent but he has some catching up to do before he can be considered a top colt.

Unless Concert Tour (Street Sense) runs a crazy good race in Saturday's GI Arkansas Derby, Essential Quality (Tapit) will be the Derby favorite, but he certainly doesn't look invincible. Not, at least, after the GII Toyota Blue Grass S.

Essential Quality is not one of those horses who ever takes your breath away, and that was again the case Saturday at Keeneland. In what was a two-horse race every step of the way, Essential Quality was able to wear down Highly Motivated (Into Mischief) in deep stretch after battling that one most of the way. He won by a neck and earned a 97 Beyer.

Will a similar effort be good enough to win the Kentucky Derby? It may. It may not. Whereas Life Is Good might have been a heavy favorite in the Derby had he stayed healthy, it looks like Essential Quality's odds will be in the 7-2 range.

Highly Motivated will also take some money at Churchill Downs and rightly so. He put up a very good fight in the Blue Grass in his first-ever start around two turns and probably hasn't run anywhere close to his best race yet. The 3-year-old colts are not normally Chad Brown's strength, but he has a good one here in Highly Motivated. Brown is 0-for-5 in the Derby.

“We hooked up at the top of the stretch and we had a good battle all the way to the wire,” said Highly Motivated's rider Javier Castellano. “He ran huge. I am very happy with my horse.”

No one else out of the Blue Grass figures to be a factor in the Derby.

A Shocker in the Wood Memorial

The GII Wood Memorial has struggled in recent years to produce top candidates for the Kentucky Derby and this year looks like it will be more of the same.

No Wood Memorial winner has won the Derby since Fusaichi Pegasus in 2000 and the last Wood starter to win the Derby was Funny Cide in 2003.

Calumet Farm has never been afraid to run big longshots in major races and it paid off Saturday at Aqueduct, where 72-1 Bourbonic (Bernardini) closed for last to win by a neck over Dynamite One (Union Rags). Both are trained by Todd Pletcher and the all-Pletcher exacta paid $906 for $2. The final time was 1:54.49, the slowest ever in the Wood, but the race was run over a very deep racetrack. He got an 89 Beyer figure.

Good job by NBC's Randy Moss, who predicted the final time would be the slowest in the race's history.

Bourbonic, who was ridden by Kendrick Carmouche, clearly took advantage of the fact that several of the top Wood contenders did not run their race. Risk Taking (Medaglia d'Oro) was seventh and the highly regarded Prevalence (Medaglia d'Oro) was sixth in his stakes debut. Crowded Trade (More Than Ready), the second choice at 5-2, ran third but was never a serious threat.

Just one week earlier, it looked like Pletcher might not have a starter in the Derby. He's started at least one horse every year since 2003. He now has four horses who have enough points to get into the Derby field. Along with the two Wood horses, he has GI Curlin Florida Derby winner Known Agenda (Curlin) and Jeff Ruby Steaks S. runner-up Sainthood (Mshawish).

In a year where so much focus has been on diversity, it will be nice to see Carmouche ride in the Derby. He will be the first African American to ride in the race since 2013 and will attempt to become the first black jockey to win it since Jimmy Winkfield in 1902.