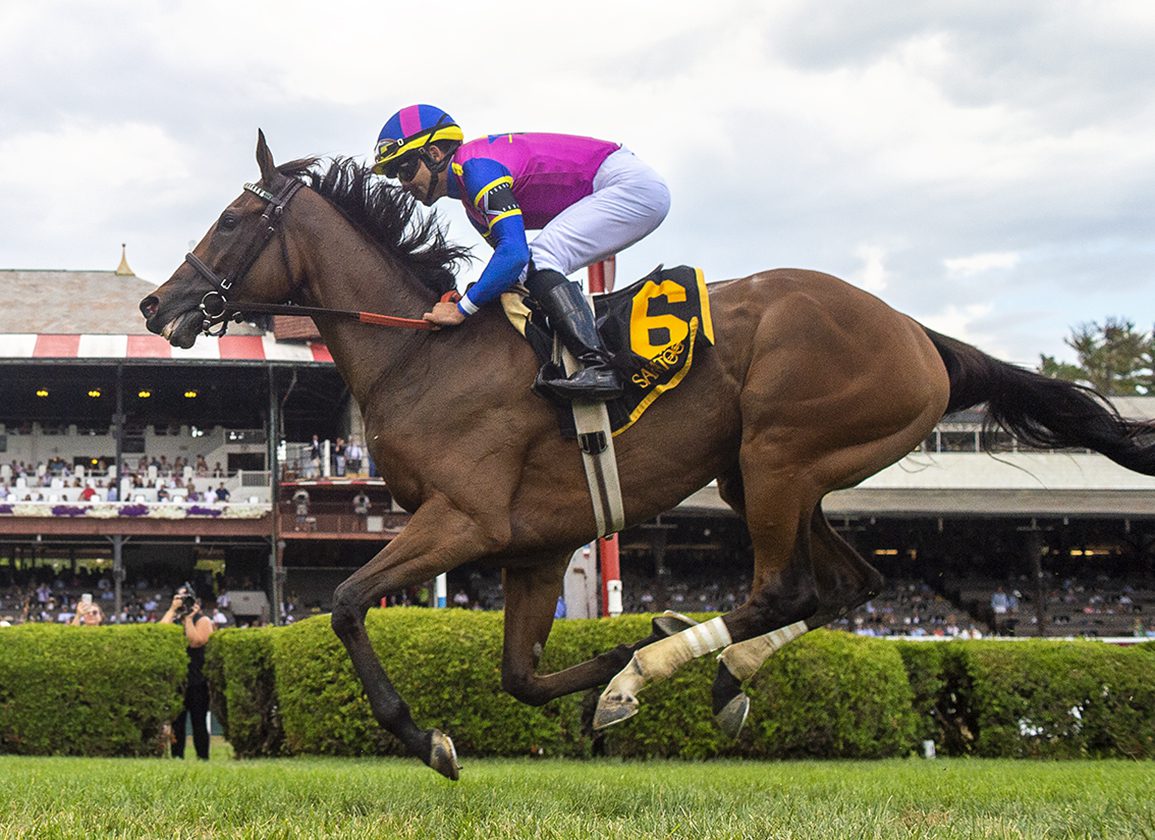 War Like Goddess, the $30,000 OBS June buy turned star turf marathoner, defended her title in Saratoga's GII Glens Falls S. with characteristic ease Saturday at the Spa, requiring little urging from Joel Rosario to pick up her eighth victory in 10 starts and sixth graded score in her last seven outings.

Opening her career with a pair of triumphs going long on the Churchill turf in the fall of 2020, the Bill Mott trainee ran fifth making her stakes bow in the GIII The Very One S. last February at Gulfstream before reeling off four consecutive graded successes, including dazzling wins in the Glens Falls and GI Flower Bowl S. here last summer. She removed any remaining doubt as to her quality when finishing a hard-fought, narrow third to champion Loves Only You (Jpn) (Deep Impact {Jpn}) in the GI Breeders' Cup Filly & Mare Turf, and captured her second straight renewal of Keeneland's GIII Bewitch S. Apr. 29 in her only start of 2022 before Saturday.

Made the favorite for the sixth consecutive race, this time as a 2-5 chance, War Like Goddess found a cozy midpack spot as longshot Key Biscayne (Brethren) was afforded an easy lead and dictated terms through fractions of :25.26, :51.53 and 1:17.51. There was still no sense of urgency or change in the plot as the mile split went up in a dawdling 1:42.33, and trailer Flanigan's Cove (Kitten's Joy) was the first to push her chips in with a wide move into contention around five-sixteenths out. The heat then picked up nearing the lane as Petricor (GB) (Frankel {GB}), War Like Goddess and Flanigan's Cove stacked four deep along with the pacesetter, but Rosario sat typically chilly on the chalk until the furlong pole. Finally cutting her loose as Temple City Terror dove to the inside to challenge, Rosario mildly pushed out War Like Goddess, who asserted herself in deep stretch to edge away from Temple City Terror and clear second choice Virgina Joy, who grabbed third.

“They were sitting on a bunch of them early, but I guess late she had a little more kick than the rest of them,” said Mott. “You always worry about if they're going fast enough up front to give her a enough pace and you don't want them to have to wrestle with her to keep her back off the pace. Joel did a good job. He has good hands and the filly responded to him and when he asked her to go on, she was there for him.”

“She's a nice horse and easy to ride,” added Rosario. “The pace was slow, but the whole time I had confidence in her and when I turned her loose and wanted to go she went. She was running really nice for me and I just had to stay with her like that. She felt the confidence at that point and I just went with that. She's just amazing. Even before I rode her, when Julien [Leparoux] used to, I remember she just always had that kick at the end. I'm very happy with the ride.”

Mott revealed that a first try against males in the Aug. 27 GI Sword Dancer S. could be in the cards next for War Like Goddess due to the downgrading of the Sept. 3 Flower Bowl to a Grade II for this year.

“We missed the New York Handicap, we got forced into missing that because of some training issues. Now we'll look at the Flower Bowl, most likely, or maybe even the Sword Dancer,” the Hall of Famer said. “We'll see. [The Sword Dancer] is a mile and a half and it's a Grade I. She's a Grade I winner already, but unfortunately the Flower Bowl has been a Grade I since I've been in New York and they downgraded it, which is a very big disappointment. There have been some real top fillies run in the race.”

The first back-to-back winner in the 27-year history of the Glens Falls, War Like Goddess is one of 12 Grade I/Group 1 winners for champion turf sire English Channel, who died from a sudden illness at the age of 19 last fall. She is the first foal out of dam Misty North (North Light {Ire}), who sold for just $1,000 to Charles Yochum at Keeneland November in 2019 prior to any of War Like Goddess's exploits. Responsible for an unraced 3-year-old Red Rocks (Ire) filly named Thecradlewillrock and a juvenile colt by Bal a Bali (Brz) named North of Bali, Misty North was not reported bred in 2020 or 2021 before visiting Curlin this season. Third dam Romanette was a SW/MGSP and produced thrice Group 1-placed Blush Rambler (Blushing Groom {Fr}).