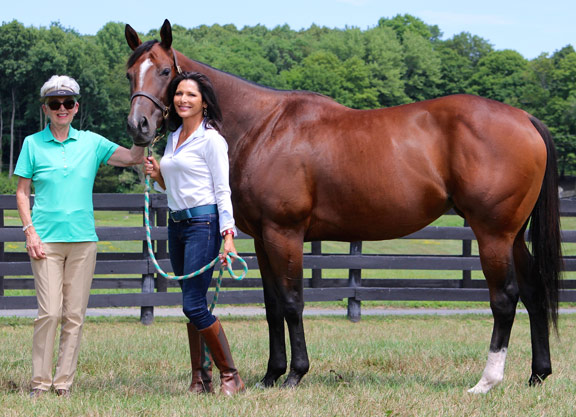 La Verdad (Yes It's True), the 2015 Champion Female Sprinter, has been euthanized due to complications from colic, according to a statement issued by her owner, Sheila Rosenblum. The 10-year-old mare had recently foaled a colt by Into Mischief at Vivien Malloy's Edition Farm in Hyde Park, New York.

Rosenblum posted a statement on Facebook, which read, “It is with a heavy heart that Lady Sheila Stable must announce the passing of La Verdad. The Eclipse Award-winning champion gave birth to a healthy colt by Into Mischief on Monday, May 4th. After a few days of medical attention, she was humanely relieved of her distress this afternoon. She passed from complications due to colic.”

La Verdad foaled three of her four foals at Edition Farm. “We all know that La Verdad was a rare gem,” said Malloy. “She was special and, at my farm, she was the queen. I felt so blessed to have her in my fields and my barn. She was a wonderful mother and on this Mother's Day, let's applaud that part of her character.”

La Verdad won 16 of 25 starts and earned $1,563,200 over a career that saw her race over four years. Campaigned in the name of Rosenblum's Lady Sheila Stable, she was trained by Linda Rice. She won 11 black-type races, and was named Champion Female sprinter in 2015, her penultimate campaign.

Since her retirement, La Verdad has produced four foals, a filly by Medaglia d'Oro in 2017 named La Kara Mia; a 2018 unnamed filly by Tapit; a 2019 yearling filly by Curlin; and the colt by Into Mischief.

Rosenblum's statement continued, “It is always difficult to lose a horse. Whether a beloved backyard pet or a professional investment or in this case, an accomplished athlete and famous personality. La Verdad was not only a racehorse. She was a symbol. She represented women in racing. As a mare. As a horse trained by Linda Rice and owned by Sheila Rosenblum. And she represented our state and our tracks, as a New York-bred never hesitating in the face of competition. It is very difficult for me to talk about. I am speechless.”

Her trainer, Linda Rice, called it a `privilege' to have been her trainer.

“La Verdad brought me, my team and all of the New York racing fans such great joy,” she told the TDN. “We watched her develop from a weanling to a yearling to her racetrack debut at age three to an Eclipse Award at age 5. She took Sheila and me on a tremendous ride through 16 victories, 11 of which were stakes, a trip to the Breeders' Cup and a championship title at the Eclipse Awards. It was a privilege to have trained her and she will always hold a special place in my heart.”