Tony Lacy and His Vision for the Keeneland Sales 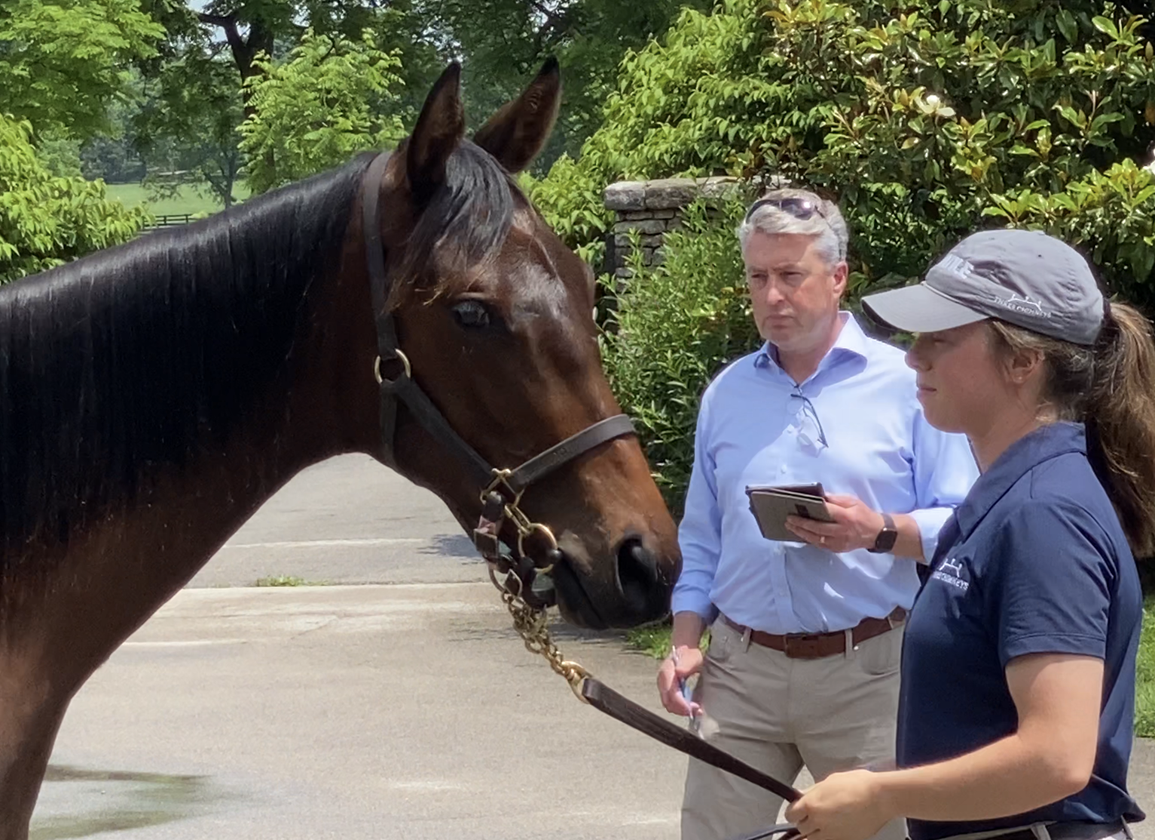 As the calendar reaches the midpoint of June and the summer heat starts to rise in the Bluegrass, yearling inspections for the 2021 Keeneland September Sale are well underway. Former bloodstock advisor and consignor Tony Lacy, who was named as Keeneland's Vice President of Sales this April, is in his element as his team travels across Kentucky and beyond, inspecting the many young Thoroughbreds that will soon make up the massive catalog lineup come September.

“I grew up a horseman and that's what my family is, so this is really coming back to my roots,” Lacy said on a sultry afternoon in Versailles after dodging summer storms to complete a long list of inspections at Three Chimneys Farm. “I think this is where I can relate very closely after being a consignor for 20 years at Four Star Sales. I know the anxiety levels at this time of the year–where these horses might fall in the book and what their marketability might be. I can bridge the gap, I believe, between what the seller feels like they need and what the sales company needs to provide.”

A fourth-generation horsemen, Lacy began his career in his native Ireland working as an assistant trainer to his father, T.F. 'Tom' Lacy, while also becoming an accomplished amateur jockey both on the flat and over jumps. He then worked stints as an assistant trainer in France, the U.S. and Dubai. He landed back in the U.S. in 2001 to help launch Four Star Sales and began taking on advisory and managerial roles for many successful racing and breeding operations.

Over the years, he has represented Emirates Racing and the Dubai World Cup in the U.S., served as the North American Representative for ARQANA, and advised the French Breeding and Racing Committee and France Galop. He currently serves on the board of New Vocations and is also the incoming president for the Thoroughbred Club of America.

“I think my experiences on the track and in the breeding industry help me understand the dynamics of what trainers are looking for, as well as the strife and struggle of a breeder,” Lacy said. “I've bought quite a number of horses over the years, so from that perspective, I've seen it from many angles. I'm not saying that I know it all–far from it–but I think I can relate to what people are really going through if they have an issue or they're looking for improvements in any aspect.”

In his first few weeks on the job, Lacy has worked closely with Geoffrey Russell, who served Keeneland's auction house for the last 25 years and officially retired this year, but will serve as a consultant through the remainder of 2021.

“Coming in as vice president of sales, it's really an all-encompassing position,” Lacy said. “In the first few weeks, I've gotten exposed to a lot of aspects of how every department interacts with each other, which certainly allows you to balance everything out and understand why something is possible or might not be possible. I'm working very closely with Geoffrey right now, who is obviously in the early stages of his retirement which he is enjoying, but he's been a great help in the transition.”

With several new faces at the helm of Keeneland's sales operation, Lacy said the incoming team's goal is to evolve the company's image and identity throughout the industry.

“I think Keeneland may be perceived as the big green institution that may not be as approachable,” he explained. “I know as a kid growing up, it was iconic and it still is. It's got an extremely strong brand. But I think with the way the industry has evolved and with what people demand, we've got to be more interactive. There is an entertainment aspect to it. There is a customer service aspect to it. There's a lot of problem solving and it's a lot about being compassionate.”

Lacy said that Shannon Arvin, who officially transitioned into the role of Keeneland President and CEO Jan. 1 of this year, as well as Gatewood Bell, who was named as Vice President of Racing this February, both played a role in creating the vision behind this new outlook.

“Shannon is fantastic. She gets it,” he said. “Gatewood has been a great support as well. We're all working in lockstep. I think we come with a very targeted perspective of modernizing Keeneland and I'm excited about that. I'm excited to be a part of it. I didn't give up everything to do this without allowing it to happen. I've committed everything to it.

“Between Shannon, Gatewood and myself, we certainly see that racing and sales [teams] have to work together very closely,” he continued. “We're really doing the same thing with a lot of the same people and it has to be a seamless process where if somebody is interacting at the sales, they're recognized for what they've contributed in racing and vice versa. We want to try and help everyone be better.” 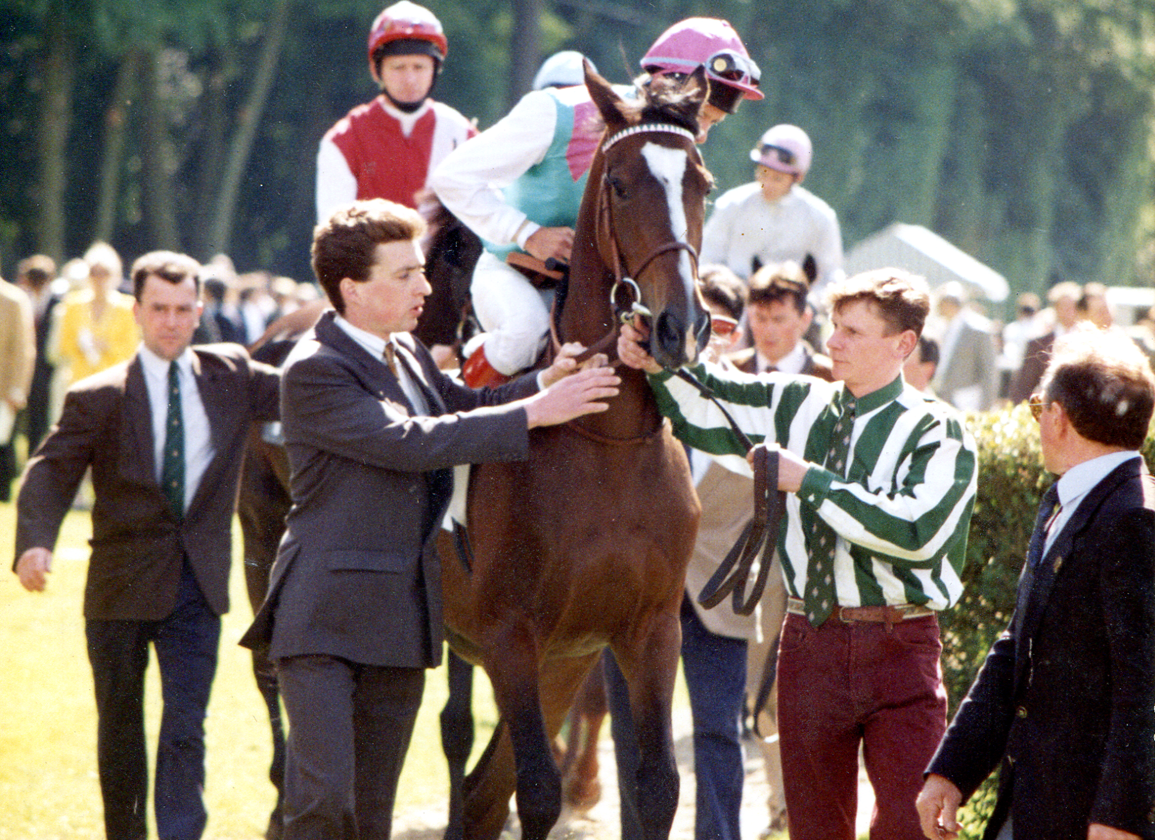 Lacy and his team will have the advantage of making these first steps toward their mission at a time when optimism is riding high in the industry and the results are showing at the sales.

“Last year was obviously a stressful time for everyone,” Lacy said. “But when you look at the 2-year-old sales this year, there's a lot of positivity. People are really anxious to get back out there. Syndicates are getting much more involved and that aspect of it creates a real energy coming into this year and I think we want to promote that.”

If there was one positive to take away from last year's sales season, Lacy said it would be the industry's ability to take a stressful environment and bring forth innovation.

“The online platform encouraged people to bid online more if they couldn't make it to the sale,” he noted. “The introduction of walking videos, as well as just a little more transparency with information, all help the process. I think these things were necessary last year, but this year they become the standard around the world and I know Keeneland has embraced that.”

Lacy said he has always believed each drop of the hammer is more than just a hip number going through the ring followed by a subsequent transaction. It's a lesson he remembered time and time again as a consignor at Keeneland and one that helped Four Star Sales become one of North America's leading sales agencies.

“There is a fun aspect to a sale that the buyers need to be able to enjoy,” he said. “It's not always about the transaction. It's about the competitiveness and trying to find the next Derby horse. I love every day I go to work and I want it to be like that for everybody. It should be an exciting place for people to come and do business with a great vibe for the process.”

Now, Lacy has made it a full-time commitment to create a rewarding experience for each buyer and seller that will step onto Keeneland's grounds this fall.

“Growing up, you look at Keeneland and how iconic it is and it was really never something I ever thought was possible to be in the position I'm in,” he admitted. “So I feel very fortunate and I feel the responsibility of the job. But it's a wonderful organization and I think it's exciting at the moment because obviously there's turnover in faces at Keeneland, but I think that brings a fresh perspective and a whole new attitude. We're all working towards the goal that we want to be stronger in 10 years' time than we are now and leaving it for the next team, the next generation, to be able to pick up and make even better.”