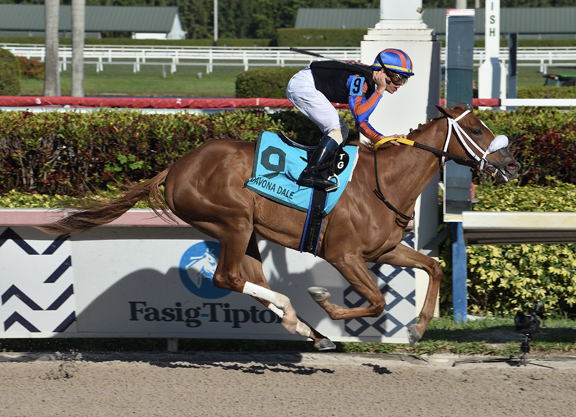 The 70 Beyer Speed figure Tonalist's Shape earned last time for her GIII Forward Gal S. score might have scared some bettors off of her and onto 'TDN Rising Star' Spice is Nice–who earned an 84 Beyer for her head-turning 12-length debut romp–but the Saffie Joseph, Jr. pupil proved plenty fast as she upped her record to five-for-five and continued her march towards the GI Longines Kentucky Oaks.

A 19-1 debut winner for Juan Avila and Sabana Racing Stable Corp sprinting here last September, Tonalist's Shape was subsequently sold privately and turned over to Joseph before taking a Gulfstream Park West optional claimer Oct. 20. She aired by nine lengths in the track-and-trip Hut Hut S. Nov. 30–good for an 89 Beyer–and resurfaced to annex the Feb. 1 Forward Gal by a comfortable margin at 3-10 odds.

Away well from her outside draw, Tonalist's Shape made the early lead narrowly and was soon joined by Spice is Nice with several other runners in hot pursuit. Longshot Chart (Lea) cranked up the pressure on the chestnut when as she rushed up the fence approaching the turn, and likely made Tonalists's Shape hit the gas a bit early as she posted a :46.93 half. The front-runner began to open up again through six panels in 1:11.26, and was always doing enough from there to keep Spice is Nice at bay, with 25-1 Dream Marie spicing up the trifecta.

“I didn't really expect to be in front, but she broke so sharp and nobody really wanted the lead so I went ahead and took it. She was cruising along nicely,” winning rider Tyler Gaffalione said. “I know she wants to run all day so I wasn't afraid to pull the trigger a little early, and she's just a really nice filly. She's got a lot of class to her and I'm so happy for Saffie and his team. They're unbelievable people and they've been supportive of me throughout my career so I'm just ecstatic for them.”

Joseph was also surprised to see his filly in front early.

The trainer continued, “She knows how to win–that's the important thing. She's not flashy in the morning, but when it comes race day, she's so calm. In the barn she can be almost over the top, but on race day she's calm,” Joseph said. “The main thing is we've secured our spot for the Kentucky Oaks. We'll talk it over, but the [Mar. 28] Gulfstream Oaks makes sense.”

Pedigree Notes:
A $60,000 OBS April RNA after breezing in :10 2/5, Tonalist's Shape is the first stakes winner and graded winner for her young 'TDN Rising Star' sire, who earned that distinction with a graduation score going nine panels on the same Gulfstream Park surface as an early 3-year-old. She is one of eight graded winners out of Harlan's Holiday mares, two of which were by her grandsire Tapit. Dam Hitechnoweenie was a stakes winner going a mile on the dirt at Prairie Meadows and missed by a nose in a synthetic sprint stake at Turfway before selling for $75,000 to Sabana Farm at the 2015 Keeneland January. Tonalist's Shape is her dam's first foal, and was followed by an Outwork filly of 2018 and a Connect colt of 2019. Hitechnoweenie, a daughter of SW and MGSP Hi Tech Honeycomb, most recently visited Tiznow.